After signing another quarterback earlier this evening, the Texans continue to add to their offense. Aaron Wilson of the Houston Chronicle reports (via Twitter) that Houston is signing wide receiver Taywan Taylor to a one-year deal worth the veteran minimum. 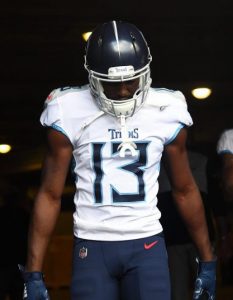 The Titans’ 2017 third-round pick showed promise during his first two years in the NFL, including a sophomore season where he hauled in 37 receptions for 466 yards and one touchdown. However, since getting traded to Cleveland in 2019, he’s struggled to see the field. Over the past two years, Taylor has only seen time in six total games and 51 total offensive snaps.

The Texans have a crowded depth chart at wide receiver. The team was already rostering veterans like Brandin Cooks and Randall Cobb, and they’ve spent the offseason adding more veterans (like Andre Roberts and Chris Conley) and rookies (including third-rounder Nico Collins). Taylor will be the 13th receiver on Houston’s roster, so it’s going to be an uphill battle for him to make the squad.

Taylor does have some experience on special teams, so he could find another spot to make the roster. He had five tackles for the Titans during his rookie season, and he returned three kickoffs for the Browns in 2019.

The Titans traded wide receiver Taywan Taylor to the Browns for a 2020 draft pick, per a club announcement. Paul Kuharsky of PaulKuharsky.com tweets that it will be an unconditional seventh-rounder. Taylor, a 2017 third-round draft pick, was inconsistent on the whole, but he did flash, at times.

The Western Kentucky product boasts speed and big-play ability, making him an intriguing addition in Cleveland. There’s no shortage of talented targets for Baker Mayfield, but Taylor represents another fun downfield threat.

Derrick Henry had a very interesting 2018 season. He started off very slowly and grew frustrated with his role splitting time with Dion Lewis in the Titans’ backfield. In eight of the team’s first 12 games, he had 46 or fewer rushing yards. Then he caught fire over the final month of the season, putting in consecutive performances of 238 and 170 yards on the ground. In that 238-yard game he had one of the most electrifying plays of the entire NFL season, with his 99-yard instant-classic touchdown run where he threw multiple defenders to the ground. Henry became the team’s featured back down the stretch, and Lewis got reduced to a bit role.

It created an interesting situation heading into 2019, as Henry enters the final year of his rookie deal. We’ve already heard that Lewis’ roster spot is safe, but it’s unclear how they plan on splitting up work, especially with offensive coordinator Matt LaFleur now gone to Green Bay. Speaking of his contract situation, Paul Kuharsky of PaulKuharsky.com writes that it will be “complicated.” Kuharsky opines that “if he has the big year they need from him, he will command more money than he is worth. And if he doesn’t, then he won’t be worth having.” A second-round pick in 2016, Henry will likely be seeking a big payday next offseason. The coaching staff and front office have never seemed completely enamored with him even when he’s producing, and it’ll be fascinating to see how they handle his free agency. Kuharsky is vehemently against the Titans using the franchise tag on the Alabama running back, writing that the “best hope for the Titans regarding Henry going forward is that he had a very good year and the market is soft for him anyway” next spring.