Trent Brown considered retirement after what he described as a near-death experience last season. An IV mishap before Raiders-Browns game last season led to the then-Las Vegas tackle being hospitalized.

The 380-pound offensive lineman was on track to play last season in Cleveland, after a bout with COVID-19 previously sidelined him. But the hospitalization, compounded with the coronavirus contraction, led to Brown experiencing issues for several months into the offseason.

“To actually fully recover, it probably took about eight months to feel normal again,” Brown said, via NFL.com. “And to actually start making steps, as far as improvement, to feel like myself again on the field after eight months.”

In his second Raiders season, Brown suffered a calf injury in Week 1 — a pattern that recurred this season — and returned on time a month later. But an October COVID-19 contraction sidelined him again. After the IV incident, when air was accidentally introduced into Brown’s bloodstream, the mammoth blocker passed out at a Cleveland hospital. He was shelved — via a second stint on the Raiders’ reserve/COVID-19 list — for another five games after missing the Browns contest on Nov. 1, 2020. Brown spent three days in the hospital before returning to Las Vegas.

“That was different. Coming off of COVID and then just expecting to play a game, and then make it all the way to the city, to the game, to the locker room,” Brown said. “And I’m going through my normal routine, getting an IV, and to just pass out and almost going into cardiac arrest was crazy.

“To kind of come back and play against the Browns [last week], I thought was pretty cool, because I almost died before we played them last year. When I was laid out on the floor, I definitely thought about my kids. I even thought about retiring, honestly. It was that scary. I was about to be done with it. Then after it kind of settled down a bit, I was fine.”

The Raiders traded Brown back to the Patriots in March, but the seventh-year tackle has played fewer than 100 snaps this season. Brown was ready to go by Week 1, but seven snaps into New England’s opener, the first-string right tackle suffered a new calf injury. He did not return until Week 10. Brown did play 69 snaps in the Pats’ win over the Browns upon returning, however.

Although Brown signed a four-year, $66MM deal with the Raiders that ran through the 2022 season, he and the Patriots agreed on a restructure that has the 6-foot-8 lineman on track for free agency in March.

For the first time since Week 1, Trent Brown is expected to be in uniform for the Patriots. They activated the veteran tackle Saturday, while placing Jamie Collins on IR.

Brown sustained a calf injury in New England’s opener, and the team did not place its right tackle starter on IR immediately. The Pats initially hoped Brown would come back without an IR stint, but they parked him on the injured list in early October. The seventh-year veteran is now back but has certainly gone through some unavailability issues since his first Pats stint.

After missing five games with the Raiders during a Pro Bowl 2019 season, Brown missed much of the 2020 season because of calf issues and multiple stays on the Raiders’ reserve/COVID-19 list. Brown has played just seven snaps this season, costing himself money through the incentives the Patriots included in his restructured contract. While the 380-pound blocker remains an imposing presence who could make a difference for a run-geared Pats team, he suddenly has much to prove during the second half of his age-28 season.

The Patriots listed Collins as doubtful for Week 10. After beginning the season with the Lions, Collins made his way back to the Pats for a third stint and made a slick interception in their Week 9 blowout win in Charlotte. Collins has played in five games since re-signing with the Pats, registering a sack and seven tackles in addition to his INT.

Trent Brown has not played since Week 1 due to a calf injury. The Patriots’ right tackle starter is now guaranteed to miss at least three more games; the team placed Brown on IR Saturday, Field Yates of ESPN.com tweets.

Since his first stint with the Patriots ended, Brown has been unable to stay healthy. He did make the 2019 Pro Bowl, becoming the rare right tackle invitee that year, but played in just 11 games. Last year, a calf injury in Week 1 sidelined him before multiple stints on the Raiders’ reserve/COVID-19 list wrecked his season.

The Patriots reacquired Brown for a Day 3 pick but have not been able to deploy him much. As part of a redone contract, Brown is only signed through the end of this season. The 6-foot-8 blocker’s value has taken a major hit since the Raiders gave him a four-year, $66MM deal early in free agency two years ago.

In addition to Brown’s extended absence, the Patriots are set to be without three other offensive line starters against the Texans. Left tackle Isaiah Wynn and guards Shaq Mason and Michael Onwenu are out. Mason is injured but not on IR; Wynn and Onwenu are on the team’s coronavirus list. This will leave center David Andrews as New England’s lone first-string O-lineman available Sunday in Houston.

Trent Brown will not be in the Patriots’ starting lineup against the Jets on Sunday. The calf strain the recently reacquired right tackle suffered last week will keep him out.

This marks the latest health setback for Brown, who missed much of last season due to injury and COVID-19 complications. Second-year UDFA Yasir Durant is the top candidate to fill in for Brown, Mike Reiss of ESPN.com tweets.

This marks the second straight year a calf injury will sideline Brown. His 2020 started similarly, with a Week 1 calf ailment leading to missed early-season time.

The Pats traded a 2022 fifth-round pick to the Raiders for Brown and a seventh-rounder and redid the large lineman’s contract. Part of Brown’s reworked deal includes per-game roster bonuses totaling $2MM. While Brown was called day-to-day after his latest injury, he missed New England’s Wednesday and Thursday practices and managed a limited session Friday. This participation may point to Brown missing just one week, but the run of bad breaks for the seventh-year veteran should be a bit of a concern for a team that also has a left tackle (Isaiah Wynn) with an extensive injury past.

Though he became the rare right tackle Pro Bowl invitee in his first Raiders season, Brown missed five games in 2019. He missed 11 in 2020. After Brown’s calf issue forced three missed games last season, he had two stints on the Raiders’ reserve/COVID-19 list. While Brown did not miss a game for the Patriots in 2018, when he played a major role in the franchise winning its sixth Super Bowl, the 6-foot-8 blocker’s health in the time since he initially left New England has become an issue.

The Raiders made major changes on their offensive line this offseason, jettisoning two Pro Bowlers and their longest-tenured starter. Two or three first-year starters are expected to block for Derek Carr this season. 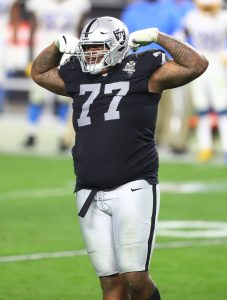 Prior to the Raiders separating from Rodney Hudson, Trent Brown and Gabe Jackson, the team offered the latter duo pay cuts in order to stay, Vic Tafur of The Athletic notes (subscription required). It is not known how substantial the proposed cuts were, but both Brown and Jackson declined the Raiders’ offers.

After reports surfaced Jackson would be cut, the Raiders found an 11th-hour trade partner and sent the seven-year guard starter to the Seahawks for a fifth-round pick. That pick (No. 167) became Illinois cornerback Nate Hobbs. The Raiders dealt Brown to the Patriots for a fifth as well; Las Vegas also sent New England a seventh-rounder in that swap. Both players have since reworked their contracts.

The Raiders gave Jackson a five-year, $56MM extension in June 2017; two non-guaranteed years remained on that deal. The Seahawks and Jackson have since agreed to a three-year, $22.58MM extension, which came with $16MM in total guarantees and $10.75MM fully guaranteed.

Given a then-tackle-record four-year, $66MM deal in March 2019, Brown battled injuries and COVID-19 last season. He made the Pro Bowl in 2019, however. Signing up for a second Brown stint, the Pats have the mammoth tackle under contract at $9MM for the 2021 season. He is due for free agency again in 2022. Brown did end up agreeing to a pay cut in New England, though incentives can take the pact up to $11MM.

Las Vegas has since drafted Alex Leatherwood in Round 1; he will be projected to take over for Brown at right tackle. Richie Incognito, who did agree to return at a reduced rate, and Denzelle Good are back in the fold at guard. John Simpson, a 2020 fourth-round pick, is also set to vie for Jackson’s old right guard spot as well. Andre James, who has since signed an extension himself, may well succeed Hudson at center.

Here’s a quick roundup of some AFC West rumblings: