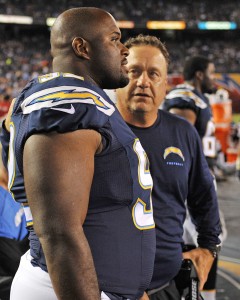 Shortly after opting to use their franchise tag on Hunter Henry and add an $11MM-plus cap figure to their payroll, the Chargers restored some of their cap space.

The Bolts released starting defenders Thomas Davis and Brandon Mebane. The two have a combined 28 seasons’ worth of NFL experience; each played key roles for the 2019 Chargers team. Together, these releases will create $9.5MM in cap space for the Bolts.

Davis signed with Los Angeles last year and was the team’s runaway tackles leader. Eight-plus years after his most recent ACL tear, the 36-year-old linebacker started all 16 games. Davis indicated he was prepared to retire after the 2018 season, but since it began with a suspension, he preferred to keep going.

Davis instead chose a two-year Chargers deal, but being set to turn 37 next week, retirement surely will be on the table for the Panthers’ all-time tackles leader.

Mebane spent four seasons with the Bolts, beginning his Charger run in San Diego and playing in L.A. for the past three years. The former Seahawk worked as a starting nose tackle during each season.

TODAY, 6:20pm: The Chargers have placed Mebane on the injured reserve, according to ESPN’s Eric Williams (via Twitter).

NOV. 14th, 2:03pm: Brandon Mebane tore his biceps and is out for the season, a source tells Ian Rapoport of NFL.com (on Twitter).

Mebane signed with the Bolts in free agency this spring. Upon joining the team, he spoke glowingly of the defense and how excited he was to be a part of it.

“I was telling guys, there’s more talent on this defense than in Seattle. If you look at the draft, you’ve got four first-round draft picks. You’ve got five second-round draft picks, all total on defense. In Seattle, we only had two first rounders and one second rounder. Everybody else was pretty much down in the draft or undrafted,” he said in May.

The longtime Seahawks defensive lineman spent his entire career in Seattle before joining San Diego this offseason. From 2007-2015, he missed only 13 games. Now, he’s pretty much going to miss the second half of the 2016 season.

Mebane earned an average rating from Pro Football Focus for his 2015 performance, placing him just inside the top-100 of the league’s interior defenders. This year, however, PFF has Mebane ranked as the 15th best interior defender in the NFL, ahead of notables such as Malik Jackson, Michael Brockers, Stephon Tuitt, Derek Wolfe, and Dominique Easley.

Jets receiver Eric Decker told SiriusXM NFL on Tuesday afternoon that, right now, the Jets “have to move on without” free agent quarterback Ryan Fitzpatrick. However, as a guest on NFL Total Access on Tuesday evening, he expressed confidence that the Jets and Fitzpatrick will ultimately get a deal done, writes Dan Hanzus of NFL.com.

“Something is going to happen. It might be before training camp, the day or two before, but I believe that he’ll be back on the team come this fall,” Decker said, though he did acknowledge that the two sides “are so far off” from each other when it comes to the quarterback’s dollar value.

In other NFL news…

8:47pm: Mebane’s three-year deal is worth $13.5MM, according to Michael Gehlken of the San Diego Union-Tribune (Twitter link).

4:37pm: The Chargers have beefed up their offense over the past two days, resigning lineman Joe Barksdale and tight end Antonio Gates while also adding wideout Travis Benjamin. Now they’re looking to add to their defense, as the team announced that they’ve signed nose tackle Brandon Mebane to a three-year deal.

The longtime Seahawks defensive lineman spent his entire-nine year career in Seattle. Since joining the organization as a third-round pick in 2007, Mebane missed only 13 total games. He made 15 starts this past season, finishing with 24 tackles and 1.5 sacks. Throughout his career, the 31-year-old has compiled 349 tackles and 15.5 sacks.

Mebane earned an average rating from Pro Football Focus for his 2015 performance, placing him just inside the top-100 of the league’s interior defenders. We had the veteran listed as the 11th-best free agent interior defensive lineman.

The Browns have had a knack for stealing headlines in recent years, but that trend could come to a halt this offseason. New Browns executive vice president Sashi Brown is not looking to make a splash in free agency, various agents tell Aditi Kinkhabwala of NFL.com (on Twitter). The Browns already lost out on one significant free agent target today when Marvin Jones signed a lucrative deal with the Lions.

A look at the latest rumors as we draw closer to free agency: