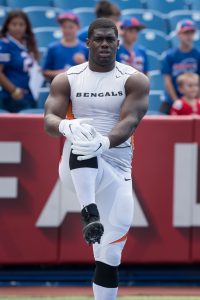 The Bengals have signed first-round pick (No. 9 overall) John Ross and fourth-round pick (No. 116 overall) Carl Lawson to their rookie contracts, per Jim Owczarski of the Cincinnati Enquirer (via Twitter). 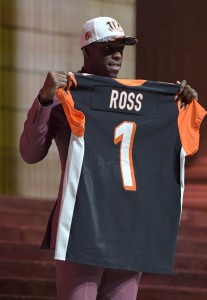 Ross, of course, had a breakout final season at Washington (81 catches for 1,150 yards and a whopping 17 receiving TDs), and he has game-breaking speed, which will be an excellent complement to A.J. Green in Cincinnati. The concern, of course, is that the diminutive wideout has major medical red flags, which caused some teams to drop him on their boards or remove him from their boards entirely. Ross tore his ACL and missed the 2015 collegiate campaign and also underwent labrum surgery after the combine, and we heard last week that some clubs only view him as a one contract player and not as a long-term investment.

If he stays healthy, his explosiveness could be a boon to the Bengals both on the offensive side of the ball and in the return game. He will be in line for a four-year deal worth roughly $17MM and a $10.5MM signing bonus.

Lawson, meanwhile, was the first of three fourth-round selections the Bengals made, and he will earn roughly $3MM over the life of his four-year pact. The Auburn product amassed 9.5 sacks in his final collegiate season, and Cincinnati plans to utilize his pass-rushing skills from the outside linebacker position even though he lined up as a defensive end in college.

A quick look at the latest college players who will head for the 2016 NFL Draft: