Giants defensive tackle Jay Bromley has totaled just three starts in 39 games since going in the third round of the 2014 draft, but he’s pushing for a No. 1 role this year, writes Paul Schwartz of the New York Post. When asked who will start next to elite nose tackle Damon Harrison, Bromley told Schwartz: “If I’m being honest, man, I see me. I see me.’’ The position opened when the Giants lost Johnathan Hankins to the Colts in free agency, though Big Blue subsequently invested a second-round pick in ex-Alabama D-tackle Dalvin Tomlinson and signed former Bills lineman Corbin Bryant. The fact that those two are in the mix will make it difficult for Bromley to achieve his goal of starting, but as a contract-year player, a breakthrough season would be a boon to his bank account. Regarding his lack of long-term security, the 25-year-old offered: “It’s there and obviously something you have in the back of your mind. I have a family now, so I have to keep that in mind. I know I have the talent, I know I have what it takes, it’s about being consistent each and every day, proving to the coaches I’m their guy.’’

Here are the specifics on a few deals signed in recent days:

12:19pm: The Steelers and Darrius Heyward-Bey have agreed to a multi-year deal, Rand Getlin of Yahoo Sports tweets. Heyward-Bey had multiple suitors, Getlin adds, but the receiver felt that it was important for him to stay in Pittsburgh. 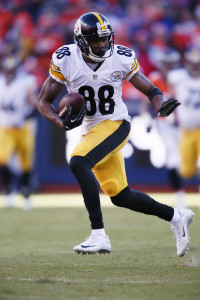 Heyward-Bey, 29, was active for all 16 games for the Steelers in 2014, but didn’t see much action, earning just five targets on the year. In 2015, he got more involved in the offense. In 16 games (four starts), the wide receiver hauled in 21 catches for 314 yards and two scores. Heyward-Bey was targeted only 39 times, however, which is a big step down from the looks he used to see with the Raiders for his first four seasons and with the Colts in 2012.

As training camps are inching closer and closer, Mark Kaboly of TribLive.com takes a quick look at the key additions, key losses, and training camp goals of each AFC North team. The Steelers, Bengals, and Ravens all have top goals on the defensive side of the ball, while the Browns predictably are focused on finding a quarterback between Josh McCown and Johnny Manziel.

Here are some deeper looks into each of the AFC North teams:

Having been quiet for most of free agency, the Steelers made a move today, announcing in a press release that they’ve re-signed free agent wide receiver Darrius Heyward-Bey. According to the club, it’s a one-year contract for Heyward-Bey.

Heyward-Bey, 28, was active for all 16 games for the Steelers last season, but didn’t see much action, earning just five targets on the year. He grabbed three balls for 33 yards, both career-worst marks. It was also Heyward-Bey’s first year without a receiving touchdown. Still, the veteran wideout was enthusiastic about returning to Pittsburgh.

Having spent a year getting comfortable with quarterback Ben Roethlisberger and the Steelers’ offense, perhaps the former seventh overall pick will see his role expanded a little for 2015, but he’ll still fall behind Antonio Brown, Martavis Bryant, Markus Wheaton, and perhaps others on the team’s depth chart. In all likelihood, Heyward-Bey will contribute primarily on special teams, as he did in 2014.

When Anquan Boldin left the Ravens last offseason, it looked like former undrafted rookie Deonte Thompson could potentially step up and fill the void. However, the former Florida Gator struggled during his sophomore season. The wideout missed the first three games with a foot injury and was reportedly arrested in February (the case was dropped).

As a result, Thompson is trying to make up for lost time. With the odds stacked against him, the 25-year-old is hoping for a breakout season. Via Ryan Mink of BaltimoreRavens.com…

“It’s a big year,” Thompson said. “I’m motivated, man. I’m so motivated. You can’t take anything for granted out here. You have to give it your all.

“It’s going to be a great competition, man. No doubt. The cream always rises to the top, so the best will definitely stick out.”

“Everything was going good and I felt like the sky was going to be the limit, then bam, I get hurt.

“When I got back, just catching back up and trying to get back in, the season’s already rolling and guys are plugged in. That really set me back.”

Thompson certainly has some competition for a roster spot. Besides shoo-ins Torrey Smith, Steve Smith, Marlon Brown and Jacoby Jones, he’ll also have to compete with Jeremy Butler, Michael Campanaro and LaQuan Williams.

Let’s check out some more news from the AFC North…

It’s Saturday, and that means ESPN.com’s NFL writers open up their mailbags and answer questions from readers. Here are some interesting notes out of the AFC…