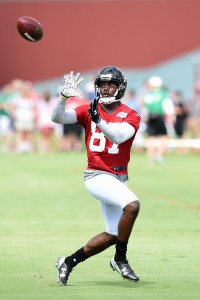 Atlanta’s seventh-round pick in 2016, the speedy Fuller won’t have an opportunity to make his NFL debut until 2018 – if he plays in the league at all. The former UCLA Bruin cracked the eventual NFC champions’ roster a year ago, but they placed him on injured reserve before Week 1 with a shoulder issue.

While Fuller’s latest injury is an awful development for the 23-year-old, it doesn’t necessarily change the calculus for the high-flying Falcons. Fuller was on the low end of a depth chart that includes the inimitable Julio Jones, Mohamed Sanu, Taylor Gabriel, free agent pickup Andre Roberts and Justin Hardy. 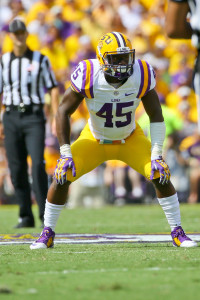 Jones, an LSU product, finished out his college career in style with 88 total tackles, 12.5 tackles for a loss, two interceptions, one forced fumble, and three passes defensed. Jones started only one game through his first three years in Baton Rouge, but he exploded when given the opportunity in his senior season. Jones impressed scouts with a 4.38 second 40-yard-dash at his Pro Day and despite concerns about being undersized, he drew interest from a host of teams looking for a tough linebacker.

In other Falcons news, linebacker O’Brien Schofield is lobbying hard for a reunion. Meanwhile, free agent cornerback Leon Hall remains on the open market after his visit with Atlanta.

Ian Rapoport of NFL.com adds one more club to the list of teams bringing in Ole Miss wideout Laquon Treadwell for visits, tweeting that Treadwell will meet with the Jets on Wednesday. Eastern Kentucky pass rusher Noah Spence will be visiting Gang Green on Wednesday as well, per Manish Mehta of the New York Daily News, who adds that UCLA receiver Devin Fuller met with New York today (Twitter links).

Here are a few more notes from around the NFL, with a heavy emphasis on draft visits…

One of the top tight end prospects in this year’s draft, Tyler Higbee was charged with second-degree assault, alcohol intoxication in a public place, and second-degree fleeing or evading police on Sunday, Zach Greenwell of the Bowling Green Daily News reports.

The 23-year-old Western Kentucky product was considered a potential Day 2 pick, but these charges will undoubtedly cloud his draft weekend. Higbee caught 48 passes for 563 yards and eight touchdowns last season but missed five games due to a knee injury that he told reporters at his pro day was 75-80% healed.

Let’s round up some draft notes to close out this Tuesday evening:

When it comes to potentially re-signing Ryan Fitzpatrick, the Jets would like to do a contract containing incentives, but the quarterback’s camp has resisted that idea, a source tells Brian Costello of the New York Post.

That’s an interesting tidbit, since QB contracts that feature playing-time and performance incentives are often used for backups, not starters. Chase Daniel‘s deal with the Eagles is one such example, and – perhaps not coincidentally – it has been cited as a comparable for the Jets’ offer to Fitzpatrick. Daniel’s three-year contract has a base value of $21MM, with a max value of $36MM if he ends up starting and hitting incentives.