The Houston Texans are at a crossroads as an organization. After surprisingly firing Bill O’Brien toward the beginning of the year they were left without a head coach and GM. Romeo Crennel and Jack Easterby have taken over those roles on an interim basis, but the franchise is currently in a bit of a rut and lacking direction. They’re also without a lot of draft picks, including their first-rounder next April, due to trades O’Brien made. As they look to dig themselves out of that mess, owner Cal McNair is apparently leaving no stone unturned.

McNair recently had dinner with quarterback Deshaun Watson, the one thing the team has going for them at the moment, and he picked his brain about what he’d like to see moving forward, McNair told Adam Schefter of ESPN.com. Schefter writes that “McNair wanted to hear Watson’s thoughts and opinions on who should be the next head coach.” Assuming Watson gets legit input, it would be relatively safe to assume the Texans will target an offensive mind. Chiefs offensive coordinator Eric Bienemy is sure to be a hot name, although there are plenty of other offensive minds as well.

Former Seahawks punter Jon Ryan en route to Buffalo and will sign with the Bills when he lands, Ian Rapoport of NFL.com tweets. Ryan was released by Seattle on Monday, but it didn’t take long for him to find a new gig. 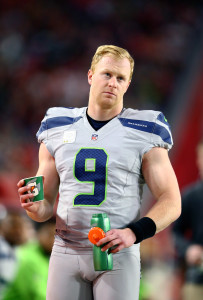 Ryan technically requested his release from Seattle, though it was more of a preemptive measure than anything else. Ryan was very fond of the organization and the city after ten years with the club, but he was inevitably going to lose the punting competition to fifth-round pick Michael Dickson.

Ryan isn’t assured anything with the Bills, either. Ryan will compete with Colton Schmidt for the punting job, meaning that he has a few weeks to unseat someone who has spent the last four seasons in that post.

Jon Ryan‘s time with the Seahawks has come to an end. On Monday, the punter took to Twitter to bid farewell to the Seahawks after spending the last ten seasons with the organization.

“Its been an absolute honor and privilege to play in this great city of Seattle for the past ten years. I never wanted this day to come, but knew it would someday,” Ryan wrote. “Even though I’m leaving, I will always be a Seahawk…I want to thank all of my teammates over the years, Paul Allen, John Schneider, Matt Thomas, and Peter McLoughlin, the amazing coaches I’ve had here: Mike Holmgren, Jim Mora Jr., and Pete Carroll, and the entire support staff at 12 Seahawks Way. But, more than anything, I want thank the 12s. You embraced a pale-skinned, red-headed Canadian with a speech impediment and made him feel like a superstar. I will forever be grateful for each and every one of you. Thank you Seattle.”

Although Ryan is sad to leave Seattle, the writing has been on the wall for some time now. The Seahawks selected fellow punter Michael Dickson in the fifth-round of this year’s draft, so Ryan was unlikely to win the job despite his history with the club and proven abilities as a holder.

Seahawks wideout Doug Baldwin is currently dealing with a knee issue that will force him to miss a couple of weeks, coach Pete Carroll told reporters today.

Meanwhile, Carroll didn’t sound as optimistic about the recovery of defensive end Dion Jordan, who is sitting on the physically unable to perform list. The head coach described the veteran’s injury as a “stress issue,” although the latest ailment isn’t attributed to Jordan’s offseason knee surgery.

12:50pm: Punter Jon Ryan took to Twitter to announce that he has a new four-year pact with the Seahawks.

“Found out this morning that I will have the honor of playing in front of the greatest fans in the world for 4 more years,” Ryan tweeted.

Ryan, 34, has been with the Seahawks since the 2008 season. With the exception of ’08, Ryan has appeared in all 16 regular season games for the Seahawks in all of his Seattle seasons. For his career, which also includes two seasons with the Packers, Ryan owns a 44.8 yard-per-attempt average on his punts. Ryan turns 35 in November, so this new four-year deal could potentially take him through his age-39 season.

In other Seahawks news, the team re-signed receiver Jermaine Kearse this wek.

Let’s take a look at how Bobby Wagner‘s new four-year, $43MM deal impacts his club and several other teams with linebackers anticipating a new contract.