The Lions lost to the Colts on Sunday, and they picked up a couple of significant injuries while doing so. Defensive end Trey Flowers is going on injured reserve and as such will miss at least the next three games, the team announced Monday. 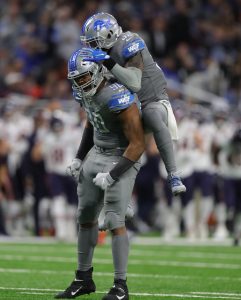 Meanwhile star receiver Kenny Golladay picked up a hip injury that will sideline him this week and have him week to week moving forward, sources told Ian Rapoport of NFL Network (Twitter link). Rapoport noted in a follow-up tweet that IR is a possibility for him as well. The team views Flowers’ stint as a short-term one, Tim Twentyman of the team’s official site tweets.

It sounds like he’ll be back before too long, but it’s still a big blow. Signed to a five-year, $90MM pact last March, Flowers is the anchor of Detroit’s already underwhelming pass-rush. The former Patriot has two sacks and two forced fumbles through seven games this year. Fortunately the team just traded for Everson Griffen, and now they’ll really need him.

Golladay of course is the team’s top receiver, and this is a big setback for the offense. Golladay missed the first couple of games of the season with a hamstring issue, but had at least 105 yards in back to back games before going down against the Colts. Hopefully both will be back on the field as soon as possible.

The Bears and WR Allen Robinson have resumed extension talks after a tumultuous week, and Ian Rapoport of NFL.com reports that Chicago rebuffed trade inquiries on its star receiver while increasing the contract offer it had on the table. However, Jason La Canfora of CBS Sports says negotiations are not likely to last deep into the season.

Per La Canfora, Robinson and the Bears still don’t see eye-to-eye on Robinson’s value, and Robinson may be content to head into the 2021 offseason as arguably the best WR available in free agency. But La Canfora says Robinson will not hit the open market. If the two sides don’t come to terms on a new deal, look for the Bears to slap the 27-year-old with the franchise tag. Obviously, both parties would prefer to avoid that outcome, but it sounds like there is still a wide gap that needs to be bridged in short order.

Now for more from the NFC North:

A bevy of wide receiver news has surfaced Friday, with several key weapons either out or likely to be shelved for Week 2. Here is the latest from the wideout ranks:

Larry Fitzgerald has taken a year-to-year approach to retirement for a while now, but the Cardinals‘ all-time great has continued to return and remain productive. However, he will not spend much time considering a return if the now-Kyler Murray-led team makes a surprise run and wins Super Bowl LV this season.

“That would definitely validate me,” Fitzgerald said of a Super Bowl victory, via Darren Urban of AZCardinals.com. “You wouldn’t see me around here anymore if that happened. Another catch, another touchdown, another yard is not going to make more whatever – my legacy is pretty much cemented. I just want to win a championship, I want to compete for a division title. Those are the things that are important to me.”

Now 37, the league’s oldest active wideout has climbed into second place on both the receptions and receiving yards lists. Needing 172 catches to pass Jerry Rice, Fitz would likely need at least two more full seasons to have a chance to move into the No. 1 spot on that list. A yardage pursuit does not seem remotely attainable. Regarding the Cards’ Super Bowl hopes, they sit 17th at plus-5000 — according to BetOnline.ag — to claim a championship this year.

As Week 1 approaches for 30 teams, here is the latest wide receiver news:

Now that Taylor Decker‘s contract is squared away, the Lions are turning their attention to Kenny Golladay. The Lions are nearing agreement with the wide receiver on a brand new extension, according to a league source who spoke with PFT’s Mike Florio. However, there’s conflicting word from NFL.com’s Ian Rapoport (Twitter link) who hears that nothing is imminent. 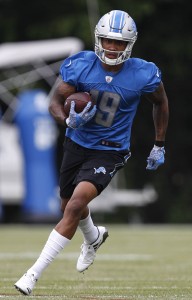 Earlier this year, it was believed that Golladay would actually be prioritized ahead of Decker, so it stands to reason that there’s some momentum on that front as the season draws near. Currently set to make $2.133MM in 2020, Golladay is clearly due for a pay bump. Mega extensions have been rare in the current climate, but Golladay could see an average annual value of at least $17MM. On the higher end, he could command something similar to what the Cowboys gave to Amari Cooper – a five-year, $100MM contract with $60MM guaranteed.

When Matthew Stafford was on the field, things were clicking for Golladay. He finished out with eleven touchdown and 1,190 yards, numbers that would have been stronger had Stafford been healthy throughout the year. Golladay also averaged 18.3 yards per catch, a new career best that ranked fourth in the NFL.

TODAY: Good news for the Lions. Stafford has been removed from the COVID-19 list and has been placed back on the active roster, per a team statement. Apparently, the third test that he was required to take before entering team facilities resulted in what turned out to be a false positive, but his next three tests were all negative. Neither Stafford nor any members of his household have (or had) COVID-19.

Placement on this list does not mean these players tested positive for the coronavirus. The list also includes players who are quarantining because they came in contact with someone who has tested positive. Stafford will join Golladay, Hockenson and Coleman in being away from the bulk of Lions teammates for the time being.

Thus far, Stafford is the NFL’s highest-profile player to land on the COVID list. He is, however, believed to be asymptomatic at this time, per NFL.com’s Tom Pelissero (on Twitter).

If Stafford tested positive, he will be required to miss at least five days. This waiting period is only for asymptomatic players. Players who test positive and have symptoms for the virus must miss at least 10 days. That number is fluid; it depends on symptoms players experience. Players who land in either category must test negative twice before rejoining the team.

In this altered training camp format, practices do not begin until Aug. 12. Full practices do not start until Aug. 17, so the Lions have a bit of time for their group of starters to return. Teams begin their strength and conditioning-based acclimation periods Monday. Of course, this all depends on the players’ issues with the virus.

Top Lions wideout Kenny Golladay is due to make $2.133MM in 2020, the final season of his rookie contract. Considering his importance to the team, his overall abilities, and the fact that he is starting to look like one of the better receivers in the league, that represents a terrific value for Detroit. 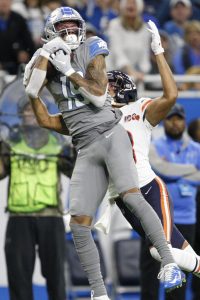 It stands to reason that the Lions would like to extend Golladay before he is eligible to hit the open market next offseason, and both sides are interested in a new deal. But as of March 30, no contract talks had commenced, and it’s highly unlikely that anything will change in that regard until there is more clarity on future salary caps.

Indeed, big-money extensions have been rare in the current climate, and Golladay’s next contract will undoubtedly be a hefty one. Jason Fitzgerald of OverTheCap.com believes the Northern Illinois product will land a deal with an average annual value of at least $17MM (Twitter link), and a review of the receiver market shows that estimate might actually be on the low end. While Golladay may not be on the level of the Saints’ Mike Thomas, it can certainly be argued that he is at least as good as the Cowboys’ Amari Cooper, who just inked a five-year, $100MM contract ($60MM guaranteed) this offseason.

Golladay could stand to improve his consistency, as he put up a couple duds in 2019 even before QB Matthew Stafford was lost for the season. But when Stafford was under center last year, Golladay posted four 100-yard efforts, and he was a TD machine throughout the season, hitting paydirt 11 times. For what it’s worth, Golladay graded out as a top-10 receiver in terms of Defense-adjusted Yards Above Replacement, and he also made the first Pro Bowl of his career.

In all, he tallied 1,190 yards to go along with those 11 TDs, both career-highs. And though his career catch rate is a little on the low side (57.6%), that often comes with the territory for a big-play threat. After all, Golladay posted a whopping 18.3 yards-per-reception last year, good for fourth in the league.

He has been on an upward trajectory over his first three professional seasons, and it would be fair to expect another step forward in 2020, assuming Stafford stays healthy. As soon as the team gets a better understanding of its future financial picture, it seems likely that it will start negotiations in earnest.