Tedric Thompson‘s stint with the Chiefs has come to an end. NFL.com’s Tom Pelissero of NFL.com’s reports (via Twitter) that Kansas City is cutting the safety. The team will elevate practice squad wideout Marcus Kemp to the active roster to take the open roster spot, via Herbie Teope of the Kansas City Star (on Twitter).

Thompson, a fourth-round pick in 2017, spent the first three seasons of his career with the Seahawks. He started 16 games for Seattle between the 2018 and 2019 seasons, collecting 76 tackles and three interceptions. However, a shoulder injury limited him to only six games in 2019, and he was released by the Seahawks back in March.

He ultimately landed with the Chiefs, where he’s served mostly in a rotational role. He’s fallen down the depth chart in recent weeks; since Week 5, he’s only played 22 defensive snaps, and he’s been a healthy scratch for the past two games. Thompson’s stint with the Chiefs will end with him having compiled 13 tackles in eight games.

Kemp has spent most of the past four seasons with the Chiefs organization. The 2017 undrafted free agent out of Hawaii has seen time in 24 career games, including seven this season. The 25-year-old has eight career tackles and a pair of catches on his resume.

Marcus Kemp‘s season ended before it could even start. The Chiefs wide receiver is done for the year after suffering ACL and MCL tears, according to Blair Kerkhoff of the Kansas City Star. To take his place on the roster, the club signed guard Jeff Allen to a one-year deal. 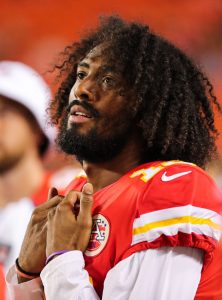 Kemp was in the midst of a strong preseason and had a real shot at making the 53-man roster as a wide receiver. The former UDFA out of Hawaii appeared in all 16 games last season, plus two playoff contests, and notched his first NFL catch. Unfortunately, he’ll be sidelined after a low hit from Steelers safety Sean Davis in preseason action.

Allen, meanwhile, is on board for his third stint with Kansas City. He has 66 career starts to his credit, including four last season.