The Panthers are signing defensive lineman Morgan Fox, per Albert Breer of TheMMQB (via Twitter). Tom Pelissero of the NFL Network adds that it will be a two-year, $8.1MM deal, with $7MM guaranteed (Twitter link).

He saved his best for 2020, appearing in 39% of Los Angeles’ defensive snaps and recording six sacks, both career highs. He will join the newly-signed Haason Reddick as part of Carolina’s revamped pass rush.

The Panthers finished in the bottom fourth of the league in 2020 with just 29 team sacks, and Reddick and Fox should help push that number higher this season.

Both the 49ers and Joe Staley realized this offseason they wanted to pursue an extension. The 49ers did so after watching the left tackle’s 2018 film, while Matt Maiocco of NBC Sports Bay Area notes Staley — once on the fence about playing into another decade — also decided he wanted to keep going.

“We went back and watched it (Staley’s film) in the offseason,” John Lynch said, “and it was even more impressive than we thought, so he earned it, first and foremost, by that. I think Joe is the perfect guy to say, ‘Hey, we’re also about taking care of our own.’ We just had to have some of our own that we had that opportunity with, and when we’ve turned over the roster, we haven’t had many opportunities. But Joe was one of those, and probably nobody deserves it more than him.”

Talks accelerated last week, Maiocco adds, and although Staley’s two-year extension was announced Wednesday night, the 34-year-old lineman agreed to a new deal on Monday. So any Mike McGlinchey-to-left tackle plans will be tabled for the foreseeable future.

Here is more from the NFC West’s warmer climates:

Rams defensive end Morgan Fox tore his ACL on Thursday, a source tells Tom Pelissero of NFL.com (on Twitter). Naturally, the injury will rule him out for the entire 2018 season. 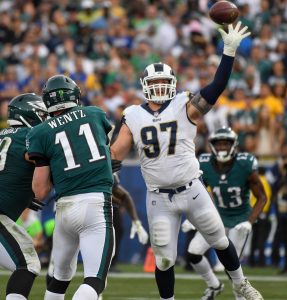 Fox appeared in all 16 games (376 snaps) for the Rams last season and tallied 2.5 sacks and 19 total tackles. Fox, 24 in September, was set to offer support off of the bench this season for L.A., behind the likes of Michael Brockers, Ndamukong Suh, and Aaron Donald.

The Rams may bring in another defensive lineman to compete for a job, but they could be able to get by with what they have in-house. Ethan Westbrooks and Dominique Easley figure to be heavy in the rotation while Day 3 picks John Franklin-Myers and Sebastian Joseph probably have improved odds of seeing the field this fall.

This week’s round of OTAs have been costly for teams as Fox is the third player to succumb to serious injury in recent days. Eagles linebacker Paul Worrilow and Chargers tight end Hunter Henry will also miss the entire season with ACL tears. 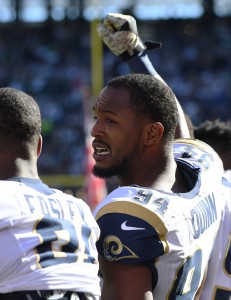 Thursday’s practice squad transactions from around the NFL:

Barely a month into his first Rams season, Coty Sensabaugh will head back to unaffiliated status within the NFL. The Rams cut the recently signed cornerback to make room for the signing of defensive lineman Morgan Fox off their practice squad, Alden Gonzalez of ESPN.com tweets. 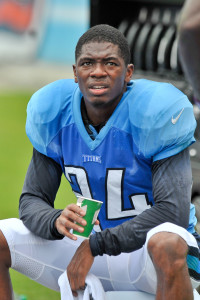 Sensabaugh started in two games for Los Angeles this season and played in three, doing so after signing a three-year deal to come over from Tennessee in the offseason.

Signed for $14.5MM across that span, Sensabaugh will earn $4.5MM for his time with the Rams this season, $1MM via fully guaranteed base salary and $3.5MM via roster bonus, Adam Caplan of ESPN.com notes (on Twitter). He will also collected a $1MM roster bonus next March, per Caplan (on Twitter). The 27-year-old corner was playing on a $4.85MM cap number this season for the Rams.

A fourth-round Titans pick in 2012, Sensabaugh worked his way into Tennessee’s starting lineup in 2015. He started 15 games last season to command the middling sum in free agency. He made 58 tackles, two interceptions and returned one for a touchdown last season. This year with the Rams, he became a healthy scratch by Week 4, playing behind E.J. Gaines and Lamarcus Joyner.

Fox joined the Rams as a UDFA out of Division II Colorado State-Pueblo this offseason.