The Vikings announced Chad Greenway will retire after 10 seasons. A Tuesday press conference is on tap for the UFA linebacker to retire as a member of the Vikings, with whom he played all 10 of those campaigns. 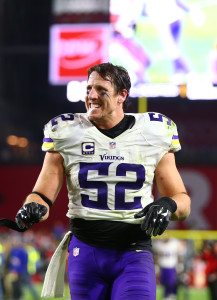 Greenway signed a one-year contract in 2016 to return to the team, but last season was expected to be his last. The 34-year-old linebacker will make good on those intentions. This will mark a new era for the Vikings, who drafted both Greenway and Adrian Peterson in the first round of the 2007 draft.

The former Iowa standout made two Pro Bowls, in 2011 and 2012, and 144 career starts. He became a full-time starter beginning in Week 1 of the ’07 slate and didn’t relinquish his spot on the outside in the Vikings’ 4-3 scheme. Greenway made nine Vikings starts last season, playing for $2.75MM. Greenway played in all 16 games last season and made 41 tackles, a career-low mark. Finishing his career with 1,334 tackles, Greenway made more than 100 in six of his 10 seasons, with a 148-stop 2012 campaign representing his high-water mark. He also registered 18 career sacks.

Minnesota still has Anthony Barr, Eric Kendricks and Emmanuel Lamur under contract for 2017. Lemur signed a two-year deal in 2016 as well.

Packers director of football operations Eliot Wolf has accepted a new contract in Green Bay and withdrawn from the 49ers’ search for a general manager, reports Tom Pelissero of USA Today. He’s the second candidate this week to bow out of San Francisco’s hunt for a GM, joining Seahawks co-director of player personnel Trent Kirchner. One of Wolf’s colleagues in Green Bay, director of player personnel Brian Gutekunst, and Vikings assistant GM George Paton are continuing to vie for the 49er job and will conduct second interviews with the team next week.

Despite having the second-most spending room in the NFL ($58.84MM, per Over the Cap), the 49ers have been quiet in free agency, and Eric Branch and Vic Tafur of the San Francisco Chronicle wonder if new head coach Chip Kelly is scaring players away. Right or wrong, Kelly wasn’t exactly seen as a players’ coach in Philadelphia, and some of his methods there – e.g., daily urine tests and a fast-paced offense – could be serving as roadblocks in the 49ers’ quest to add talent, Branch and Tafur opine.

With starting cornerback Jerraud Powers eligible for free agency, the Cardinals are considering their options at the position, and have veteran corner Leon Hall scheduled to come in on Monday for a visit, reports Adam Schefter of ESPN.com (Twitter link).

Hall, 31, started just four of his 14 games for the Bengals last season, but still played in 735 defensive snaps, ranking 33rd among qualified cornerbacks, per Pro Football Focus. Cincinnati has already retained free agent defensive backs Adam Jones and George Iloka, so it will be interesting to see whether the team can also re-sign Hall (and Reggie Nelson), or whether the veteran cornerback may land in Arizona, where the Cards could pair him with Patrick Peterson.