Regardless of what head coach Todd Bowles says, the Jets‘ QB battle is not an open competition, according to Brian Costello of the New York Post. Costello writes that Josh McCown has taken about 99% of the first-team reps in training camp, while Christian Hackenberg has worked almost exclusively with the second unit. Unless Hackenberg excels during New York’s first two preseason games, Costello expects McCown to be under center come Week 1, which is what we expected all along.

The Jets re-signed Erin Henderson this offseason but may not have the veteran linebacker available for the rest of this year after the team placed him on the reserve non-football injury/illness list, according to Adam Caplan of ESPN.com (via Twitter). 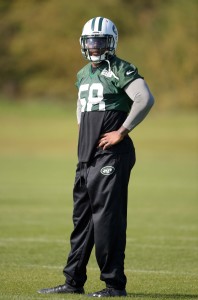 An illness led the ninth-year veteran to this list, which works like the standard IR format, meaning Henderson could return after eight games. The Jets signed linebackers Victor Ochi and Julian Stanford from their practice squad, per Brian Costello of the New York Post (on Twitter). They also placed tight end Braedon Bowman on the traditional IR with a torn ACL, Ralph Vacchiano of SNY.tv tweets.

A second-year Jets ‘backer, Henderson started four games and played in five for his second NFL employer this season. With first-rounder Darron Lee also out for Sunday, New York is thin at linebacker after this interesting development.

Henderson played Monday night against the Cardinals and made a season-high seven tackles, but this recent transaction will put the 30-year-old inside linebacker’s chances at returning in 2016 as a slim proposition. Costello seemed to point to the change in Henderson’s status occurring late this week (Twitter link).

Henderson played the 2015 season with the Jets on a one-year deal but re-signed in March on a two-year pact for $5MM. He doesn’t have any guaranteed money left on his deal and would stand to see his cap number rise from $1.25MM to $2.75MM next season. Henderson spent the first seven seasons of his career with the Vikings.