The Titans have signed linebacker Wesley Woodyard to a two-year extension, Field Yates of ESPN.com tweets. The new pact will keep him in place through the 2019 season. He can earn up to $12.75MM over the next three years. 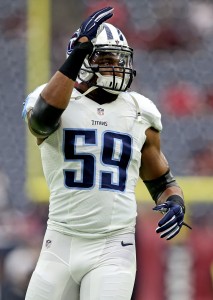 Woodyard, 31 in July, has not missed a single regular season game in his three years with the Titans. He was an every-game starter for Tennesee in his first year there (2014), but he has seen his role downsized a bit in each of the last three seasons. Still, he’s a valuable piece of the defense and he’ll now be tied down for an additional two years.

Woodyard’s old deal called for him to hit the open market after the 2017 season. While he was slated for a $5.5MM cap number with a $4.25MM base salary, Woodyard has agreed to accept a paycut as part of the extension, per Yates. Woodyard will now earn a base salary of $2.2MM, a $1MM roster bonus (already paid out), and have the chance to earn $300K in per-game roster bonuses.

Poll: Who Is Most Likely To Be Traded?

The trade deadline is tomorrow at 4pm eastern time, and a number of prominent players have been the subject of swirling trade rumors over the past several weeks. After a nightmarish start to the season, the Buccaneers may be entertaining the idea of a fire sale, with Vincent Jackson, Doug Martin, and Dashon Goldson all potentially on the trading block.

The Titans, meanwhile, appear ready to usher in a new era with the insertion of Zach Mettenberger into the starting lineup, and they are reportedly taking calls on veterans Nate Washington, Michael Griffin, and Wesley Woodyard. The Bengals, who have regained control over the AFC North without much help from Jermaine Gresham, may be waiting for someone to meet what should be a fairly low price for Gresham’s services. And the Rams, who suffered an ignominious defeat at the hands of the Chiefs yesterday after a surprising upset of the Seahawks in Week 7, could be shopping players like Kendall Langford and Zac Stacy.

We also learned yesterday that the Vikings could be taking calls on Adrian Peterson, Chad Greenway, and Greg Jennings. However, all of those players, for various reasons, are probably less likely to be on the move than some of the other names mentioned above.

Indeed, given the level of interest in his services, the struggles of his current team, and his potential impact on a new club, the player who may be the most likely to be dealt is Jackson. This is despite NFL.com’s Ian Rapoport’s belief that Tampa Bay would not settle for less than a second-round pick in exchange for its top wideout.

But that’s just one person’s opinion. Odds are, of course, that no one will be traded; that’s simply the status quo when it comes to the NFL trade deadline. And several head coaches whose teams were rumored to be active participants in the trade market said today that they did not expect their clubs to pull the trigger on a deal. CBS Sports’ Jason La Canfora, even though he lays out a number of trades that he thinks would be beneficial for teams who appear destined for losing records in 2014, acknowledges that seeing one of those trades come to fruition would be very surprising.

However, reality is not always exciting. So, with that in mind, which of the above players do you think are mostly likely to be traded? Do you think a different player will be on the move? Or do you live so relentlessly in the real world that you think all of this smoke will fail to give rise to a single fire?

There seems to be more buzz surrounding this year’s NFL trade deadline than in years past, and Michael Fensom of the National Desk points out that Week 8 will be the final “audition” for those players who have generated the most interest, including the Buccaneers‘ Vincent Jackson and the Bengals‘ Jermaine Gresham. Fensom also observes that, since January 2012, the teams that have made the most trades are also among the most successful clubs on the field.

Of course, as CBS Sports’ Jason La Canfora writes, the odds that a major trade comes to fruition are pretty slim, especially since so few teams are clearly out of the hunt at this point in the season. That does not mean, however, that it is not worth your while to take a look at some of the latest trade buzz. The trade deadline is Tuesday, October 28:

The Buccaneers and Gerald McCoy exchanged countless proposals and they have been working on a deal every week since before camp, tweets Ian Rapoport of NFL.com. It’s a deal that both sides wanted and they got it done with a reported seven-year, $98MM extension earlier today.

The Titans are off to a slow start this season, having fallen well back of the playoff teams at 2-5, and the team’s decision to start rookie Zach Mettenberger at quarterback this weekend indicates that the focus has shifted from contending to rebuilding. As such, several veterans have been cited as potential trade candidates, but general manager Ruston Webster isn’t anticipating a busy deadline for his team, as Paul Kuharsky of ESPN.com details.

“We actively traded Akeem [Ayers]; that was something we were working on and trying to do and was good for both parties,” Webster said today on 104.5 The Zone in Nashville. “Outside of that, there’s really nothing imminent, nothing on the back burner. I’d be surprised if anything happened before the trade deadline.”

While Ayers had been a key contributor on defense in past seasons, the new coaching staff didn’t have a spot for him, and the return in this week’s trade was minimal — the Titans upgraded from a seventh-round pick to a sixth-rounder for the 2015 draft. There’s a chance the team could do a little better than that for some of its trade chips, but none of them are potential difference-makers that will move the needle significantly for a contender or net the Titans a high draft pick.

Wide receiver Nate Washington, linebacker Wesley Woodyard, and safety Michael Griffin have all been mentioned as players potentially on the block. A PFR poll this morning asked which of those players is most likely to be dealt, and Washington is currently the leader with nearly 50% of the vote. About 20% of you lean toward Webster’s apparent stance, voting that none of those three players will be moved.

The trade deadline is scheduled for Tuesday at 3:00pm central time, so Webster still has about 95 hours to change his mind and swing a deal. We’ll have to wait and see whether the rebuilding Titans indeed stand pat.

Poll: Who Will The Titans Trade?

The NFL trade deadline is just days away and recently there has been a lot of chatter about the 2-5 Titans, who apparently don’t want to wait until the offseason to start their newest rebuilding process. Tennessee traded linebacker Akeem Ayers and a seventh-round choice to the Pats for a sixth-round pick earlier this week and that might not be the last trade they pull off in October.

Three veteran players in particular have been identified as trade candidates, and wide receiver Nate Washington is the biggest of the bunch. Washington is in the final year of his six-year, $26.8MM deal and the Titans, who aren’t in the playoff picture right now, aren’t eager to pay out ~$282K per game to the 31-year-old. Of course, that doesn’t mean other clubs wouldn’t be willing to take on that obligation. The Bengals are one team that could benefit from adding Washington to the fold. Rutgers alum Mohamed Sanu has emerged as a legitimate option in the passing game, but Cincinnati could use reinforcements, especially if A.J. Green isn’t back on the field this Sunday. Moving Washington wouldn’t just save money, it would allow the Titans to see how sophomore Justin Hunter responds to being their unquestioned No. 1 receiver.

Safety Michael Griffin, who has a Tennessee tenure nearly as long as Washington’s, is said to also be on the block. Like Washington, Griffin also boasts an impressive track record of durability, playing 16 games per season from 2007-2012, 14 games in 2013, and playing in all seven games thus far in 2014. In those 14 games last season, Griffin recorded 82 tackles, four pass deflections, two forced fumbles, and one fumble recovery. Pro Football Focus (subscription required) was also bullish on him, giving him an overall grade of 6.1, good for 14th amongst all qualified safeties in the NFL last season. The advanced metrics haven’t been nearly as kind to him this season – he’s 75th out of 82 safeties – but another team could try getting him back to his old form in a different scheme.

Just hours ago, linebacker Wesley Woodyard was added to the list of Titans trade possibilities. Woodyard just signed with the Titans in the offseason on a four-year deal worth up to $16MM with $4.75MM in guarantees, so his inclusion came as something of a surprise. Still, with a youth movement taking place in Tennessee, it appears that GM Ruston Webster is willing to move Woodyard and possibly carve out more snaps for rookie Avery Williamson.

So, with the Tuesday deadline drawing closer, who do you think will be on the move?

They say the “idiot on the field” doesn’t belong there, but that’s not always the case. 23-year-old Kryshana Pierce, who rushed the field during the Colts-Bengals game, is actually a former professional women’s football player, as Dana Hunsiger Benbow of the Indy Star writes. The former wide receiver was arrested and charged with criminal trespassing, disorderly conduct, and resisting law enforcement. She did not get a contract offer from the Bengals, however, even though A.J. Green is sidelined with an injury. More from the AFC South..

“I think it’s very tough because there’s a lot of changeover, new coaches and everything like that,” Verner said. “At times, I felt that I could have been undervalued or maybe not appreciated enough.”

He said the Titans offered him a contract close to what he got in Tampa Bay, but the decision was not solely about the money.