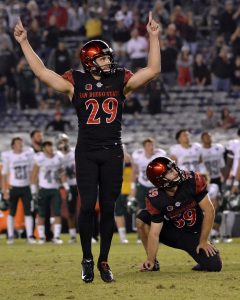 The Bears have quite a big UDFA class. Chicago announced that they have signed the following 22 undrafted free agents:

The Bears opted for a lot of small school players, adding guys from places like Limestone, Colgate, Fort Hays State, Lindenwood, and Laval. The signings of Bars and Mustipher are notable because they have a connection to the coaching staff. Both players were coached by current Bears offensive line coach Harry Hiestand when they were at Notre Dame. The Bears hired Hiestand away from Notre Dame before last season, and he knows what he’s getting in these two players.

It’s also notable that the Bears signed a kicker, because the job will be up for grabs in training camp. Chicago is looking to replace Cody Parkey after his disastrous 2018 season, and they need someone consistent. Baron was a solid college kicker at SDSU with a big leg, as his career long was 54 yards, which is pretty impressive for a college kicker. The Bears already have former AAF kicker Elliott Fry and former Tulsa kicker Redford Jones on the roster, so they’re clearly planning on having a battle royale kicking competition this offseason.