The Jets have turned to the CFL for some potential depth in their secondary. The team announced tonight that they’ve signed safety Anthony Cioffi. SiriusXM’s Adam Caplan tweets that it’s a two-year deal. 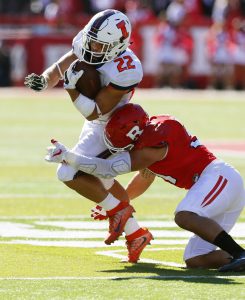 The New Jersey native was a standout at Rutgers before signing with the Raiders as an undrafted free agent in 2017. He compiled six tackles and one sack in four preseason games before getting cut by Oakland.

He ultimately caught one with the Ottawa Redblacks of the Canadian Football League, where he spent the 2018 and 2019 seasons. Serving as a defensive back and linebacker, Cioffi compiled 97 defensive tackles, two interceptions, three forced fumbles, and four sacks in 33 career games.

The Jets secondary could look a whole lot different in 2020, as cornerbacks Brian Poole, Arthur Maulet, and Maurice Canady are set to hit free agency. There’s also a good chance that the organization moves on from Trumaine Johnson.

The Jets have signed tight end Daniel Brown to a one-year extension, according to a team press release. Terms of the deal are not yet known. Last year, he earned $805K while counting for just $735K against the cap, thanks to the minimum salary benefit provision.

Brown joined Gang Green in March, fresh off of a two-year stint with the Ravens. In recent years, he hasn’t been utilized much as a pass-catcher, but the Jets still found plenty of use for him in 2019. Brown, 28 in May, lined up for 29% of their offensive snaps and was featured 67% of the time on special teams. He also appeared in every single game, marking his first NFL season with perfect attendance.

Brown figures to be a part of the plan in 2020 as well, though he’ll be playing behind Ryan Griffin and Chris Herndon. Herndon missed all but one game last year thanks a suspension, plus hamstring and rib injuries. In his stead, Griffin had 34 catches for 320 yards and five touchdowns.

Today, the Jets also announced the signing of Rutgers product Anthony Cioffi. Cioffi spent the last two seasons in the CFL where he played as a defensive back and an undersized linebacker.

The Raiders have signed 17 undrafted free agents, according to a team announcement:

Cioffi, a product of Jonathan Dayton High School in Springfield, N.J., stayed close to home for college and worked his way up to a starting role in his senior year at Rutgers. Cioffi led all Scarlet Knights defensive backs last season in tackles (63) and interceptions (2). Prior to the draft, he reportedly ran a 4.37 second 40-yard-dash in training.

Zamora was suspended for three games last season after videos emerged of him beating his dog. He was not invited to this year’s draft combine and that was likely the results of his off-the-field behavior. He appeared in ten games last season for Baylor, tallying 63 catches for 809 yards and ten touchdowns.