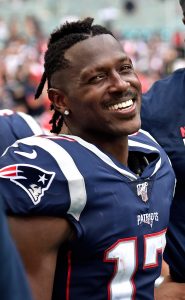 The Patriots signed both Bennie Fowler and Corey Coleman on the same day earlier this week but will keep only one of them on their roster going into Week 2.

Fowler received word the Patriots will cut him, according to Ian Rapoport of NFL.com (on Twitter). New England will sign offensive lineman Cole Croston from its practice squad, per Rapoport (on Twitter).

This marks the second time in a month Fowler’s been cut. The Bears moved on from the veteran wide receiver prior to their regular-season opener, despite signing him in free agency. The Patriots will go into their Week 2 Jaguars tilt with Chris Hogan, Phillip Dorsett, Cordarrelle Patterson and Coleman as their wideouts.

Best known for catching Peyton Manning‘s final NFL pass, a two-point conversion in Super Bowl 50, Fowler spent three seasons on the Broncos’ active roster but has yet to establish himself elsewhere. While this could be a temporary move based on needs at other positions, with Croston joining a Pats team that may or may not have right tackle Marcus Cannon available Sunday and the fact Coleman’s been jettisoned by two teams in the past month, for now the 27-year-old Fowler is again unattached.