Rams linebackers coach/ assistant head coach Joe Barry will speak with Sean McVay on Thursday about the team’s defensive coordinator vacancy, Ian Rapoport of NFL.com hears (on Twitter). If he doesn’t get the promotion, Barry could likely pivot to USC, where he likely has an opportunity to become their defensive coordinator. 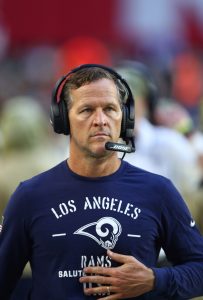 Barry served as the Redskins’ defensive coordinator in 2015 and 2016, overlapping with McVay in D.C. In 2017, he joined up with McVay in Los Angeles and served under Wade Phillips. The Rams parted ways with Phillips after the season, leaving that job vacant.

The Rams are also looking into offensive coordinators, a search that could lead them to Redskins coach Kevin O’Connell. They’ll also need to hire a new special teams coordinator after John Fassel left for the Cowboys.

In 2019, the Rams allowed 22.8 points per game and 339.6 yards per contest, putting them in the middle of the pack in both categories.

Ron Rivera said earlier this month he expects Michael Oher to be back with the Panthers next season, but the recently re-signed left tackle has not yet been completely cleared from the concussion that sidelined him for most of the 2016 season, Jonathan Jones of the Charlotte Oberserver reports. Oher missed 13 games last season and has dealt with concussion trouble for more than four months.

Rivera did not know when Oher suffered the concussion, but Jones reports the setback likely occurred before the Panthers’ Week 3 Vikings tilt — the most recent game in which Oher played. GM Dave Gettleman said recently he had not spoken to Oher in a bit and was going to give him some time. The Panthers’ left tackle signed a three-year extension last summer, but Gettleman said he plans to investigate the position this offseason. Mike Remmers is a free agent as well, and Carolina doesn’t have any much depth here, so an Oher return is crucial. He will turn 31 in May.

The Rams introduced former Redskins offensive coordinator Sean McVay as their head coach yesterday. COO Kevin Demoff, who led the search for a new coach, admitted that he wasn’t initially sure what to make of the 30-year-old.

“When you’re meeting someone who is 30 years old, your natural reaction is that you want to believe, but you’re searching for the reasons why,” Demoff said (via ESPN.com’s Alden Gonzalez). “Sean kept knocking those down at every turn, to the point where ‘why’ changed to, ‘Why not?’

“The terms you saw were ‘brilliant,’ ‘genius,’ ‘star.’ Jon Gruden suggested he was special. Those are amazing adjectives when you talk about describing someone. When you ask people for the negatives, they always say, ‘He’s young.’ We always looked at that as just another descriptive word. To me, the age factor, when you look at what the players said, this is about leading players, and their devotion to Sean, the way they feel, what you read about him, is to us what negated the age factor. They could believe in Sean as a leader.” 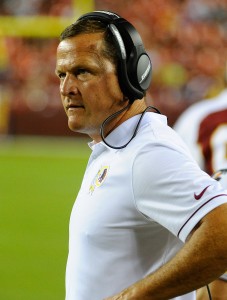 Barry has had only two years in Washington, but in that time the Redskins have finished near the bottom of the league in yards allowed. Prior to joining the Redskins in 2015, Barry’s only previous experience as a DC came with the Lions in 2007 and 2008. With Detroit, his defenses finished dead last in yards allowed. In between the two jobs, he had stints as a linebackers coach for the Buccaneers, USC, and the Chargers.

Two years ago, head coach Jay Gruden chose Barry over Wade Phillips. Now that the Broncos and Phillips could be parting ways, Gruden could take this opportunity to reverse that decision. Whether it’s Phillips or someone else, the next DC will have intriguing pieces to work with, including cornerback Josh Norman, linebacker Mason Foster, and utility man Su’a Cravens.

Cowboys quarterback Tony Romo will likely make his season debut this weekend against the Eagles, reports ESPN’s Todd Archer and Adam Schefter (via Twitter). The veteran signal-caller hasn’t taken the field since Thanksgiving of 2015.

According to Archer and Schefter, the 36-year-old will see the field for only a series or two before handing off to Mark Sanchez. The Cowboys are presumably hoping to limit the chance of an injury as they look to shop the veteran quarterback this offseason.

Romo missed the first several months of the season as he recovered from a back injury. By the time he returned, rookie Dak Prescott was in complete control of the Cowboys’ starting quarterback gig. The last time the veteran played in at least 15 games was 2014, when he threw for 3,705 yards, 34 touchdowns, and nine interceptions.

4:30pm: The Bears (on Twitter) announced the hiring of Fangio.

10:01am: After mulling over his decision for several days, Vic Fangio has decided to join John Fox‘s staff with the Bears, reports Jason La Canfora of CBSSports.com (Twitter links). According to La Canfora, the former 49ers defensive coordinator drew significant interest from both Chicago and Washington, and finally made his decision this morning.

Fangio had been considered a candidate for the 49ers’ head coaching opening, but was passed over in favor of fellow Niners assistant Jim Tomsula. At that point, the team agreed to release the defensive coordinator from his contract to pursue other opportunities. Fangio interviewed for the DC jobs in Chicago and Washington, and according to La Canfora, both teams “wanted him badly.”

After ranking 13th in DVOA in 2013, Fangio’s defense in San Francisco improved in Football Outsiders’ rankings in 2014, placing fifth overall. The Niners became a top-five defense despite being without suspended linebacker Aldon Smith for much of the season, and injured linebacker NaVorro Bowman for the entire season. Patrick Willis and first-round rookie Jimmie Ward also finished the year on injured reserve.

Having landed Fangio, the Bears figure to turn their attention to locking up an offensive coordinator. The team has reportedly been denied permission to speak to Mike Mularkey of the Titans and Jim Bob Cooter of the Lions, and has also been linked to Colts assistant Rob Chudzinski.

La Canfora adds (via Twitter) that former 49ers defensive backs coach Ed Donatell will also likely be joining Fangio in Chicago in the same role. Donatell was released from his Niners contract at the same time as Fangio, and the duo was viewed as a potential package deal.

As for Washington, the team appeared set to hire Chargers assistant Joe Barry as its defensive coordinator before Fangio became available, so it would make sense to revisit that possibility. John Keim of ESPN.com tweets as much, suggesting that – based on conversations he has had – Barry “has to be at the top of the list now” for Washington.

4:15pm: Washington made it official with an announcement, according to Chargers PR director Bill Johnston (on Twitter).

11:21am: Just over an hour after reports indicated that Vic Fangio would be joining the Bears as their new defensive coordinator, Washington has decided on a DC of its own, according to Ian Rapoport of NFL.com. Rapoport, who reported last Wednesday that the club planned to hire Joe Barry, tweets that Barry is indeed back on track to become the team’s new defensive coordinator — “for real this time.”

As I noted when Rapoport’s initial report surfaced, Barry has one previous stint as a defensive coordinator under his belt, with the Lions from 2007 to 2008. Of course, Barry left that position at a low point, following the club’s 0-16 campaign in ’08. Barry’s run in Detroit is perhaps best remembered for prompting one reporter to ask his father-in-law, head coach Rod Marinelli, if he wished his daughter had “married a better defensive coordinator.”

Since leaving the Lions, Barry has worked as an assistant for the Buccaneers, USC, and the Chargers, holding the position of linebackers coach at each one of those stops. As Washington’s new defensive coordinator, Barry will be tasked with turning around a unit that finished 27th in DVOA in 2014, including 32nd against the pass. The team also allowed 27.4 points per game this season, tied for the third-worst mark in the NFL.

While Barry’s hiring has yet to be officially announced, it would be a surprise at this point if it was derailed again. It seems that Washington’s plan to hire Barry only got delayed when Fangio became available — according to Jason La Canfora of CBSSports.com (via Twitter), Washington badly wanted to hire the former 49ers defensive coordinator, who ultimately chose the Bears instead.

As Rapoport points out, Fangio has no ties to either head coach Jay Gruden or GM Bruce Allen, whereas Barry worked with both men years ago in Tampa Bay. So if the team were to hire Fangio, it would be a departure of sorts from the usual operating procedure.

Fangio should have several potential suitors, with a report yesterday indicating that every team with an opening at defensive coordinator had expressed interest in the veteran coach. Still, as we saw yesterday when Washington moved quickly to hire Bill Callahan away from the Cowboys, the team appears ready and willing to shell out the money required for top-notch assistants. Fangio had been one of the league’s highest-paid defensive coordinators in San Francisco, so he likely won’t come cheap.

There’s still no action on Washington‘s defensive coordinator hunt, according to Mike Jones of the Washington Post (all Twitter links), who hears that the team does indeed have interest in Vic Fangio, though it remains unclear if an interview is being scheduled. As Jones notes, Washington could still end up hiring Joe Barry, as had been previously reported, but it appears the team has pumped the brakes a little on making a final decision — as more candidates become available, the process of making a hire is perhaps lasting a little longer than expected.

Let’s round up a few more notes from around the NFC East….