Clemson wide receiver Justyn Ross, one of the top prospects who will be eligible for the 2021 draft, will not play this season. A diagnosis of congenital fusion will prompt Ross to undergo surgery Friday, The Athletic’s Grace Raynor tweets. 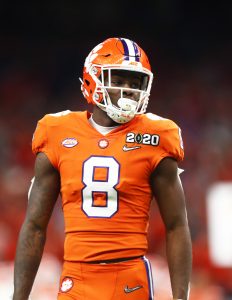 Ross suffered an injury during spring workouts in March. The subsequent X-ray revealed he was born with this condition, which occurs when two of the seven bones in the neck are abnormally fused. Clemson coach Dabo Swinney confirmed the surgery. While Ross’ doctor said there is a good chance the talented wideout can play football again, he did not guarantee it (Twitter link via Raynor).

After showing immense potential at Clemson the past two years, Ross resides on first-round radars for next year. He sits 12th on Todd McShay’s ESPN.com big board for the ’21 draft. This diagnosis could obviously change everything for the 6-foot-4 talent.

Ross totaled 112 receptions for 1,865 yards and 17 touchdown receptions during his freshman and sophomore seasons. He was expected to be Clemson’s top receiver this season, following Tee Higgins‘ early draft declaration, and is viewed as a higher-ceiling prospect than his former Tigers teammate.