The Buccaneers are parting ways with a recent high draft choice. Tampa Bay is waiving cornerback M.J. Stewart, whom the club selected with the 53rd overall pick in the 2018 draft, per Jenna Laine of ESPN.com (Twitter link). 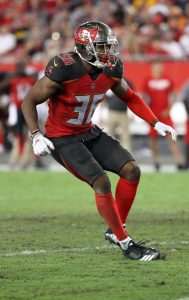 Stewart was named second-team All-ACC during his final season at North Carolina, and he was expected to be a valuable long-term contributor to a Tampa Bay secondary that desperately needed reinforcements. But injuries continually kept Stewart off the field — a foot problem cost him six games during his rookie campaign, and he missed five more games in 2019 while dealing with a knee issue.

Still, Stewart is still only 25 years old and has played 614 snaps over the past two seasons. Thanks to his second-round pedigree and his rookie contract, it’s entirely possible Stewart could be claimed off waivers, or if not, at least find a new club in the near future.

Let’s check out a few items from the NFC South: