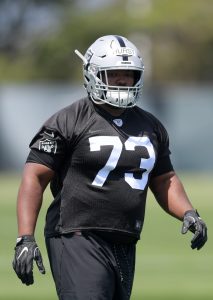 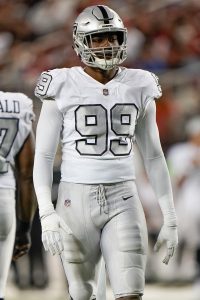 The Raiders may be without one of their rotational defensive linemen Sunday against the Chiefs. They placed Maurice Hurst on their reserve/COVID-19 list Tuesday, per Adam Schefter of ESPN.com (on Twitter).

Players do not have to test positive for the coronavirus to land on this list; they only need to have come in contact with someone who has. But considering the NFL’s issues with COVID-19 over the past several days, this bears monitoring.

Hurst was not among the Raiders fined for being photographed without masks at Darren Waller‘s fundraiser, but the third-year defensive lineman did play 35 snaps against the Bills. Hurst was not at the fundraiser, according to The Athletic’s Tashan Reed (on Twitter). But the prospect of Hurst playing last week while carrying the virus would present a major issue, though it is not yet known if he has tested positive.

Hurst, 25, also dropped in the draft due to a heart condition. That has not, however, impeded him as a pro. The former fifth-round pick has missed just three games since being drafted. A second-generation NFLer, Hurst has played 42% of Las Vegas’ defensive snaps this season. At present, he is the only player on the Raiders’ COVID list.

While Jon Gruden‘s yet to bestow much praise upon Martavis Bryant, the Raiders’ other wide receiver trade acquisition has impressed the new coach. It’s looking like the former Cowboys draft choice will have a role in the passing game, and Ryan Switzer certainly will contribute on special teams. Switzer returned seven punts for touchdowns while at North Carolina, including five his freshman year. He returned a punt for a score last season as a rookie.

“He’s a guy that can change the game, I think, on third down. He’s a tough matchup,” Gruden said, via Vic Tafur of The Athletic (subscription required). “He’s quick. He has vertical speed. He has special teams ability. … I love Switzer. I think he’s one of the best punt returners of college football, perhaps the history of college football. He’s as good as I saw.”

Seth Roberts has served as the Raiders’ top slot option for the better part of the past three seasons for a team that hasn’t featured much depth at the position. Switzer, if nothing else, may supply that.

Here’s the latest out of Oakland.

Here’s a look at today’s non-first round draft signings:

It sounds like Jon Gruden and Derrick Johnson hit it off in a one-on-one meeting, which led to the Raiders signing the 14th-year linebacker earlier on Friday. Johnson’s deal is a one-year agreement, Terez Paylor of Yahoo.com reports, adding that it’s worth up to $3MM. Gruden looks to have been a Johnson fan for a while during his years as ESPN’s Monday Night Football analyst, and that intel may have played a key role in the 35-year-old off-ball ‘backer landing with Oakland.

“I’m one of Gruden’s favorite players — he’s always had a soft spot for me,” Johnson said, via Paylor. “He’s always said that over the years. I’m not playing for a rebuilding-type year. I sensed an urgency from Coach Gruden that winning is important right now.”

The Chiefs’ all-time leading tackler, Johnson has not played in a 4-3 defense since the 2008 season. Prior to the Chiefs switching to the 3-4 look in 2009, Johnson worked as an outside linebacker with Kansas City during his first four seasons. The Raiders signed Tahir Whitehead as well. He, Bruce Irvin and Johnson could be the Raiders’ three linebacker starters, despite Johnson telling Paylor he’s not quite the same player he was since the second of his severe Achilles injuries shut him down late in the 2016 season.

Here’s the latest out of the Bay Area:

Despite visiting with each of this draft’s top four quarterbacks and being consistently rumored to have a couple of them on their radar, the Broncos did not select one throughout the draft. And they aren’t planning on bringing another one in before training camp. John Elway said Paxton Lynch and Chad Kelly will compete for the backup job behind Case Keenum, per Jeff Legwold of ESPN.com. This is an interesting approach considering both players are coming off injury-marred years. Lynch will be the only active-roster Broncos QB returning since the team let Brock Osweiler depart in free agency and traded Trevor Siemian. Denver is evidently set at the game’s marquee position, putting faith in Keenum.