Free agency action has resumed Tuesday afternoon, and another running back is off the board. Peyton Barber will sign with the Redskins, Josina Anderson of ESPN.com reports (on Twitter).

The former Buccaneers starter agreed to a two-year, $3MM deal that comes with $600K guaranteed, per Anderson. Barber will join Adrian Peterson and Derrius Guice in a suddenly crowded Washington backfield. This deal may have been in the works for a few days, with The Athletic’s Greg Auman tweeting Sunday that Barber was finalizing a contract.

Barber started 28 games with the Bucs, 23 of those coming over the past two seasons, but fell out of favor during Bruce Arians‘ first season. The 26-year-old ex-UDFA started 16 games in Dirk Koetter‘s final season but lost his job to Ronald Jones last year. Barber, who led the Bucs in 2018 with 871 rushing yards, averaged just 3.1 yards per carry on 154 totes in 2019.

The Auburn alum has never topped 115 receiving yards in a season, however. With Peterson also mostly a run downs-only back, the Redskins appear set to devote at least half of their backfield resources to players who are not accomplished passing-game weapons.

In addition to their most notable incumbents, the Redskins also have the recently added J.D. McKissic and 2019 draftee Bryce Love in the fold. Their roster certainly will not have room for all five backs, which will make for an interesting competition when the Redskins reconvene for 2020 work.

Buccaneers head coach Bruce Arians told reporters that running back Ronald Jones II will remain the team’s starter even amidst his struggles, according to Scott Smith of Buccaneers.com. Jones was benched during Week 13 for missing a blitz pickup and was replaced by Peyton Barber.

A second round pick by Tampa Bay in the 2018 NFL Draft, Jones spent all of his rookie season buried on the Bucs depth chart behind Barber-who started all 16 games last season. However, in a more prominent backup role this season, Jones clearly outperformed Barber and has been the team’s starter since Week 9. Jones has yet to translate his early season success, when he averaged 4.24 yards per carry, to the starting lineup, averaging just 3.29 yards per carry since. His struggles in pass protection though, seemed to be the final straw.

Barber and Jones have received a nearly identical number of carries this season (125 for Jones and 122 for Barber), but Tampa has remained committed to playing the hot hand regardless of who was in the team’s starting lineup. Still, at least for now, Jones remains the top running back on the Buccaneers depth chart. 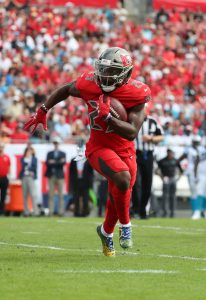 The Buccaneers are keeping Peyton Barber in the fold. On Wednesday, the Bucs re-signed the running back rather than placing the low-round tender on the restricted free agent, as Greg Auman of The Athletic tweets.

The low-round tender, worth $2.02MM, would have given the Bucs the first right of refusal. However, they would have received no compensation for the former undrafted free agent if they chose not to match. Conversely, with the second-round tender, the Bucs probably would have been able to scare away any other interested team. That tender, meanwhile, would have cost them just over $3MM for 2019. They avoided that whole mess by simply hammering out a one-year deal with him.

The Bucs have re-signed running back Peyton Barber to a one-year, $630K contract through 2018, a league source tells Field Yates of ESPN.com (on Twitter). As of this writing, he could be in the mix to start at running back, but the Bucs are expected to continue to explore their options. 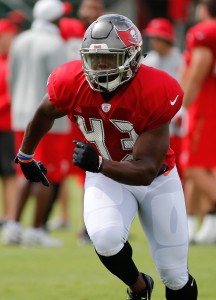 Barber, an Auburn product, missed the 53-man cut last year but was quickly added to the team’s practice squad after clearing waivers. Before the first game of the season, Barber earned a promotion to the varsity squad.

In 2017, Barber averaged 3.9 yards per carry with three touchdowns. He also added 16 catches for 114 yards. Barber becomes the second players on the Buccaneers offense to re-sign with the team this offseason, though it was for considerably less money. The team locked up wide receiver Mike Evans with a five-year, $82.5MM extension last week.

Barber did his best work late in the season including a 100+ yard performance against the Packers in early December. It served as the team’s first 100-yard rushing performance of the season. Barber’s biggest competition for a starting role on the Buccaneers’ current roster would be Jacquizz Rodgers. Tampa Bay has already released Doug Martin and Charles Sims is due to become an unrestricted free agent.

It’s likely the Buccaneers could still be on the lookout for upgrades at running back after ranking No. 27 as a team last year with 1,450 yards rushing. Entering Tuesday, Tampa Bay ranked fifth in the NFL with $62.13MM in available cap space. Some of the top running backs set to hit the open market include DeMarco Murray, Jonathan Stewart, Danny Woodhead, Isaiah Crowell, Dion Lewis and Carlos Hyde.

Although the result of the Patriots-Bills game this afternoon was an expected New England victory, something rather surprising did happen during the fourth quarter of the contest. Up handily by 20 points, Tom Brady threw an interception to cornerback Tre’Davious White. However, when the rookie fell down after his return, tight end Rob Gronkowski clearly hit him in the head while he was just face down on the turf. Gronk was not thrown out because of his malicious action, but Kevin Seifert of ESPN.com was surprised he wasn’t and thinks further punishment could be coming for the star tight end.

Seifert points out in his piece that former NFL referee Dean Blandino said that Gronkowski should have been ejected for the hit and that he could “maybe” be in-line to miss game action for the incident.

The NFL will review the situation over the next 24 hours and see what type or if any discipline is needed. Gronkowski clearly lowered his shoulder into White well after the play was over, seeming upset that the 2017 first rounder picked off Brady in his direction. However, Seifert notes that the 28-year-old doesn’t really have a track record of misbehaving on the field, despite some minor incidents. The league will also take into account that Gronkowski apologized immediately after the game.

While the NFL did levy two-game suspensions to Aqib Talib and Michael Crabtree this past week, this situation is clearly different given that there was no history of bad blood between the two players, Though, it’s clear that the Pats All-pro was in the wrong and could miss time or at least get heavily fined because of his actions on the field today.