The Bills have agreed to a new three-year deal with offensive tackle Daryl Williams, per a club announcement. The pact will be worth $28.2MM in total with nearly $14MM guaranteed (Twitter link via NFL.com’s Ian Rapoport). 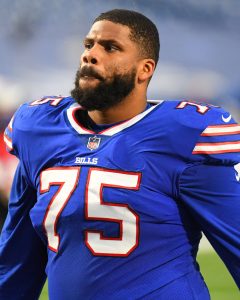 The Bills inked Williams to a one-year prove-it deal last year. He proved it. The 28-year-old started all 16 games — plus two playoff games — helping to protect Josh Allen and powering Buffalo’s offense.

Williams, 28, spent the early part of his career with the Panthers. In 2019, his final Carolina season, he moved all across front five and spent more time on the interior than on the outside. Pro Football Focus graded him 57th out of 80 qualifiers as a guard, but his best work has always been at tackle.

In 2020, the former fourth-round pick graded out as PFF’s No. 21 ranked tackle in the NFL, putting him ahead of names like Orlando Brown Jr., Jake Matthews, Laremy Tunsil, and Alejandro Villanueva. Now, the six-year vet has a lucrative new deal that will tie him to the Bills through 2023.

The COVID-19 pandemic is impacting everything in the sports world, including the NFL draft. The draft being in Las Vegas has already been scrapped for a while, but now it appears teams won’t even be gathering in their respective buildings. In an unprecedented situation, multiple high-level officials will conduct the draft from their homes, sources told Adam Schefter of ESPN.com. The pre-draft preparation will be more important than ever, as it will likely be more difficult for teams to coordinate internally while the draft is going on. It’ll be very interesting to see how this impacts draft-day trades, among other logistical issues.

The Bills have agreed to sign offensive lineman Daryl Williams to a one-year deal, according to Ian Rapoport of NFL.com (Twitter link).

Williams, 27, spent time all over Carolina’s front five last year; after playing tackle for most his career, he saw the majority of his action at guard in 2019, where Pro Football Focus graded him 57th positionally among 80 qualifiers. The former fourth-round pick was outstanding as the Panthers’ right tackle in 2017, but multiple knee injuries limited him to just one game the following season.

The Bills made a number of investments in their offensive line last offseason, signing Mitch Morse, Quinton Spain, Jon Feliciano, Spencer Long, and Ty Nsekhe to free agent pacts while selecting Cody Ford in the second round of the draft. Every member of that haul will return in 2020, meaning Williams may not have a shot to start. Given his versatility, he’ll add value as a utility lineman, but his best chance at significant playing time is likely at right guard, where he could compete with Feliciano and Long.

Williams looked poised to cash in following his excellent 2017 campaign, and even after injuries prevented him from seeing much action in 2018, many observers believed he’d still garner a hefty multi-year pact. Instead, he was forced to accept a one-year, $6MM deal as he re-signed with the Panthers. Given his health history, it’s perhaps unsurprising that he’s again inking a single-season pact.

Carolina perhaps signaled that it wasn’t interested in retaining Williams when it signed former Bengals guard John Miller to a one-year pact last week. Miller will take over at right guard for the Panthers, joining trade acquisition Russell Okung as a new addition to Carolina’s front five.

The Panthers have re-signed offensive tackle Daryl Williams to a one-year deal, according to Adam Schefter of ESPN.com (Twitter link).

Williams was considered one of the best right tackles available on the open market, but it appears other clubs have at least some level of concern about the status of his right knee. The 26-year-old Williams dislocated his kneecap and tore his MCL last summer, but was still able to suit up for Carolina’s season opener. However, Williams wasn’t able to complete the game and went on injured reserve not long after going down.

As such, Williams was hitting the free agent period coming off a lackluster platform season, but he was still expected to cash in. Fellow right tackle Ja’Wuan James received $13MM annually from the Broncos, and it wouldn’t have been out of the question for Williams to target a similar contract. Instead, he’ll take a prove-it deal with the Panthers with the hope he can rebound and before hitting free agency again in 2019.

A fourth-round pick in 2015, Williams was a full-time starter in both 2016 and 2017, appearing in 29 games and making 26 starts during that time. Even without Williams available, the Panthers’ line was respectable in 2018, ranking among the top-ten front fives in Football Outsiders‘ pass- and run-blocking metrics. Williams will return to a line that now includes new center Matt Paradis in addition to Matt Kalil, Trai Turner, and whomever Carolina finds to play left guard.

The Giants and Bills — both of whom employ former Carolina staffers as general manager — each reportedly had their eyes on Williams. Buffalo signed Ty Nsekhe to handle right tackle, while New York could turn to a free agent group that includes Jared Veldheer, Jermey Parnell, and Ryan Schraeder.

Contract talks have stalled between the Panthers and right tackle Daryl Williams, according to Joe Person of The Athletic. Williams is now on course to explore the open market when free agency begins on March 13, barring a shift in negotiations.

Williams, 27 in August, played in only one game last season after undergoing knee surgery. However, he was solid in 2017 and earned a second-team All-Pro nod.

If Williams walks, Person speculates that the Panthers may lean towards keeping left tackle Matt Kalil, a long rumored potential salary cap casualty. Kalil missed the entire 2018 season a knee issue of his own and is set to carry a $12.15MM cap hit in 2019. On March 15, $1MM of Kalil’s $7MM base salary will become fully guaranteed. Ultimately, Taylor Moton could be the club’s only tackle of note to return.

Also of note – on the whole, Person hears from league sources that the Panthers will apply their limited funds to the second wave of free agency rather than going big on one or two free agents.