The Ravens–Steelers rematch is no longer a guarantee to follow the customary Lions and Cowboys contests on Thanksgiving. With the Ravens having five coronavirus positives among players and the Steelers at four, Adam Schefter of ESPN.com notes that more cases will result in the NFL moving the game off the Thanksgiving schedule (Twitter link). It is not known how many more positive tests between these franchises would cause the NFL to move the game, but given its time slot and the fact the league has resisted postponing games since Week 7 would make this a game difficult to move. However, this situation may be close to producing a postponement. In addition to five Ravens players having tested positive, Mark Maske of the Washington Post notes five Ravens staffers also have in recent days (Twitter links). Both the Ravens and Steelers encountered virus issues earlier this month but played their respective games as scheduled.

The Broncos will go with a young contingent behind Joe Flacco. Incumbent quarterback Kevin Hogan will not make their 53-man roster, with Mike Klis of 9News reporting (via Twitter) the fourth-year veteran will be cut. 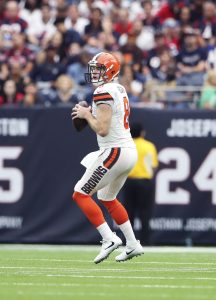 Hogan served as Case Keenum‘s backup for most of last season, catching on with the Broncos via waiver claim. He ascended to the QB2 spot after Chad Kelly‘s release. This year, the Broncos drafted Drew Lock and added Brett Rypien as a UDFA.

Lock is set to miss several weeks due to an injury to his throwing hand, and it looks like Rypien will either become Flacco’s backup or the Broncos will look elsewhere for their top signal-caller reserve. Brian Hoyer did not make the Patriots’ roster. He spent time in new Denver OC Rich Scangarello‘s system in 2017, beginning that season as the 49ers’ starter. The Patriots released Hoyer earlier today.

Hogan is not yet a vested veteran and will head to waivers. He last attempted a regular-season pass for the 2017 Browns.

The Broncos traded for veteran QB Joe Flacco in February with the clear intention of having him serve as their starting signal-caller for at least the 2019 season. But given the state of Denver’s quarterback situation since Peyton Manning retired, GM John Elway hedged his bets in a big way, drafting talented but raw prospect Drew Lock in the second round of this year’s draft and handing a $136K guarantee to UDFA Brett Rypien. 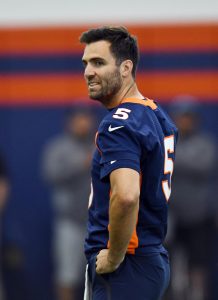 Mike Klis of 9News.com examined the status of the Broncos’ QB depth chart as we inch closer to training camp, and to no one’s surprise, Flacco is the unquestioned starter. His performance during early Broncos practices this year made Elway comfortable enough to eschew a QB prospect in the first round of the draft, and despite some speculation that Lock could push Flacco for the starting job at some point in 2019, Klis says the long-time Raven will be Denver’s one and only quarterback this season, provided he stays healthy. The fact that Flacco has looked his best when playing in an offense similar to the one that new OC Rich Scangarello runs will certainly help his cause, and he built on his strong work early in the offseason by continuing to play well throughout OTAs and minicamp.

Klis notes that Lock has shown flashes of his potential, but his decision-making and ability to read defenses still need a great deal of refinement, and the Missouri product will have a legitimate battle with Kevin Hogan for the club’s backup job. Hogan has started just one game in his professional career, but he apparently showed enough in practice in 2018 for Denver to re-sign him this offseason. However, if Lock wins the No. 2 spot, then Hogan will likely be cut, with the third-string job going to Rypien. If Lock struggles and cedes the backup role to Hogan, then Rypien may be forced onto the practice squad, where he could be poached by another team.

The AFC West looks as if it will be a highly-competitive division in 2019, and Denver will not have an easy road back to the playoffs after a three-year absence. But if Lock shows significant improvement and can become a real candidate to start in 2020, that would be a decent consolation prize.

Kevin Hogan is back with the Broncos. After being non-tendered by Denver earlier this month, the Broncos have agreed to re-sign the quarterback, Ryan O’Halloran of the Denver Post tweets. 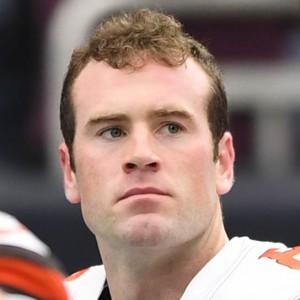 Hogan, 26, first entered the league as a sixth-round choice of the Chiefs in 2016. He didn’t catch on there, but he hooked on with the Browns’ practice squad as a rookie and eventually worked his way on to the varsity squad. In 2017, he had a brief stay as the Browns’ starting quarterback – one game, to be exact – before being pushed down to No. 3 on the team’s QB depth chart.

Hogan is still looking for his next opportunity to start. Last April, he pushed the Browns to trade him to the Redskins, but he was unable to make their final cut. The Broncos scooped him up off waivers, but he did not see the field as he backed up Case Keenum.

This year, he’ll push to make the Broncos’ final cut and battle it out with Garrett Grayson to back up Joe Flacco.