Former Pro Bowl guard Ben Grubbs is likely going to retire this offseason, according to Ian Rapoport of NFL.com (on Twitter). Grubbs, who was with the Chiefs in 2015, has been plagued by a neck injury that ended his season last year and will probably end his career. 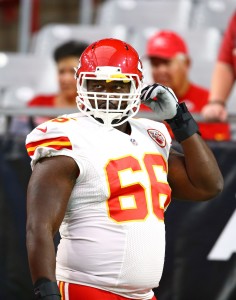 Grubbs was released by KC a failed physical designation around the start of this year’s free agency. The veteran’s contract, which he reworked upon his arrival in Kansas City, ran through the 2018 season and included $6.6MM in guaranteed money. The Chiefs were left with a sizable portion of dead money on their 2016 cap by cutting Grubbs, but they obviously felt that the move was necessary. By cutting the 32-year-old, the Chiefs agreed to be on the hook for $5.2MM in dead money while saving only $1.1MM against the cap.

Grubbs entered the league as a first-round draft choice of the Ravens in 2007. Since then, Grubbs has been something of an ironman, appearing in all 16 regular season games of every NFL season with the exception of 2011 (ten games) and 2015 (seven games). Grubbs earned Pro Bowl nods in 2011 with the Ravens and again in 2013. Despite his down year, we recently rated Grubbs as one of the 20 best offensive free agents still on the board based on his successful history.

We here at Pro Football Rumors wish Grubbs nothing but the best in retirement.

The Chiefs’ offensive line is undergoing a bit of an overhaul this offseason, and that continued with the team’s release of veteran guard Ben Grubbs, per Howard Balzer of the SportsXchange (Twitter link). Grubbs was cut with a failed physical designation.

Acquired almost exactly a year ago from the Saints, Grubbs – who turns 32 today – entered the 2015 season as one of Kansas City’s starting guards, and played seven games for the club. However, a neck injury derailed his season — after sitting out five games, he was ultimately placed on the injured reserve list by the Chiefs, ending his year. Based on the failed physical designation, it appears he hasn’t yet been cleared from that injury.

Grubbs’ contract, which he reworked upon his arrival in Kansas City ran through the 2018 season, and included $6.6MM in guaranteed money, so the Chiefs are left with a sizable portion of dead money on their 2016 cap. Assuming the veteran lineman didn’t receive the post-June 1 designation, the Chiefs will be on the hook for $5.2MM in dead money on their cap this year, creating only $1.1MM in cap savings with the move.

It’s been an eventful week so far for the Chiefs, who have reached contract agreements with several players, including Tamba Hali, Derrick Johnson, Mitchell Schwartz, and Jaye Howard. However, the team has also lost cornerback Sean Smith to the division-rival Raiders, and was docked two draft picks, including a 2016 third-rounder, for a tampering violation during 2015’s free agent period.

The Chiefs and guard Ben Grubbs have agreed on a new contract, according to Mike Florio of Pro Football Talk. The deal is for four years and $24MM, and it includes $8MM in guarantees. Another $3MM will become guaranteed if Grubbs is still on the Chiefs’ 90-man roster in March 2017.

Kansas City acquired the 31-year-old Grubbs from the Saints for a fifth-round pick on Thursday. Before reaching a new deal with the Chiefs, the eight-year veteran and two-time Pro Bowler was scheduled to be on their books for the next two seasons at cap hits of $6.6MM and $7.3MM, respectively. He’ll still get $6.6MM in 2015, per Florio.

Earlier today, the Dolphins acquired promising young wide receiver Kenny Stills from the Saints in exchange for linebacker Dannell Ellerbe and a third-round pick. Here’s a look at some of the latest reaction and fallout:

The Chiefs and Saints have agreed to a trade that will send veteran guard Ben Grubbs to Kansas City in exchange for a fifth-round pick in this year’s draft, reports Adam Schefter of ESPN.com (via Twitter).

Grubbs, who had a $9.6MM cap hit for the Saints in 2015, had long been viewed as a potential cap casualty, with Jason La Canfora of CBSSports.com reporting in February that the team would likely let him go. Trading Grubbs will have the same effect on New Orleans’ cap as releasing him would’ve — he’ll count for $6MM in dead money, creating $3.6MM in cap savings. However, by finding a taker, the team will at least get a mid-round pick in return for its two-time Pro Bowler.

Grubbs becomes the latest victim of a cap crunch in New Orleans, with today’s deal coming on the heels of the departures of players like Jimmy Graham (traded) and Curtis Lofton (released). Still, the team now appears likely to keep Jahri Evans, since hanging on to one high-priced guard is more palatable than having both on the roster. Assuming he remains in New Orleans, Evans will play next to newly-acquired center Max Unger next season.

As for the Chiefs, they don’t have a ton of cap flexibility, so it’s possible they’ll end up reworking Grubbs’ contract to accommodate him, notes Jason Fitzgerald of Over the Cap (via Twitter). They won’t have to take on Grubbs’ dead prorated bonus money when they acquire him, so his cap hit in Kansas City would be just $6.6MM ($6.5MM base salary; $100K workout bonus) for the coming season, assuming the deal is untouched. The Auburn product, who turned 31 this week, also has one more year left on his contract, for a 2016 salary of $7.2MM.

Kansas City is adding a player who is just one year removed from earning a Pro Bowl spot. In 2014, Grubbs ranked in about the middle of the pack, according to Pro Football Focus’ grades, which placed him 35th out of 78 qualified guards (subscription required). The team’s addition of Grubbs comes on the heels of its contract agreement with offensive lineman Paul Fanaika.