On a day with a seemingly endless stream of players finding new homes, one player has elected to step away from the game on his own. Steelers guard Ramon Foster is retiring from the NFL, he announced in a release on the team’s website. 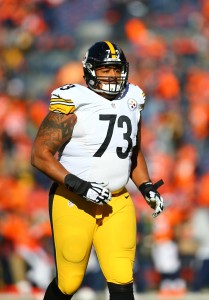 “When the time comes, you just know and now is the time for me to take a bow,” Foster in a statement. “I’ve made some friends for a lifetime, had some moments that I’ll never forget, and seen some things I never thought I would because of this game. First and foremost, I would like to thank my wife and sons. I also want to thank the Steelers organization – Coach (Mike) Tomlin, Mr. Art Rooney II, the late Ambassador (Dan) Rooney, and Kevin Colbert for making Pittsburgh feel like a family. There are so many more people I need to thank, including everyone on staff with the Steelers. I would also like to thank my teammates who made this journey something very special to me and my family – you guys were amazing.”

“Last but definitely not least, thank you to the best fans in all of sports. I’m glad to say I was a Steeler for life, and there is no other organization I would have rather played for in my career,” he finished. Foster signed with Pittsburgh as an undrafted free agent all the way back in 2009, and never left. He made the team as a rookie, and it wasn’t long before he became a full-time starter.

He was an incredibly reliable presence on the interior of Pittsburgh’s offensive line, starting at least 14 games in each of the past nine seasons. Foster signed a two-year extension worth $8.25MM last offseason, but elected to hang up his cleats a year early. The Tennessee product turned 34 in January. It’s yet another reminder that the old era of Steelers football we’ve been accustomed to is slowly coming to an end. Ben Roethlisberger is insistent he’s going to come back from his elbow injury and play at least a couple of more years, but things are starting to change around him.

It’s a busy day in Pittsburgh. After reaching an extension with Maurkice Pouncey, the Steelers agreed to a new two-year, $8.25MM deal with Ramon Foster, as Tom Pelissero of NFL.com tweets. Before the deal, Foster was set to become an unrestricted free agent on March 13.

Ben Roethlisberger‘s front line is now well set for the next couple of years. Foster, who earned $3.591MM last season, is now inked through his age-35 campaign.

Foster has been largely healthy throughout his Steelers career and ranked as Pro Football Focus’ No. 16 ranked guard in the NFL last season. His pass blocking, in particular, was exceptional. Foster’s 84.5 pass blocking score was good for seventh amongst all qualified guards, per PFF, slotting him ahead of big names like Brandon Scherff, Quenton Nelson, and Andrew Norwell.

Meanwhile, tomorrow figures to be even busier for the Steelers. The club intends to trade star wide receiver Antonio Brown by the end of the week and they’re reportedly pushing for a first-round pick in return.

Good news for Steelers fans. Left guard Ramon Foster, who was carted off the practice field yesterday, hyperextended his knee but did not suffer any ligament damage and will not require surgery, as Aditi Kinkhabwala of the NFL Network reports (via Twitter). Kinkhabwala adds that Foster will miss four to five weeks but is expected to be ready for Week 1.

Now let’s get to more notes from around the AFC:

Josh Gordon‘s present designation with the Browns is on the reserve/did not report list. The Browns likely could not have placed the 27-year-old pass-catcher on the non-football illness list, since he would have had to fail a physical for that to occur. While Gordon does not currently count toward Cleveland’s 90-man roster, Mike Florio of Pro Football Talk cautions the wideout’s road back to the team may not be a matter of him merely returning to Berea, Ohio. Gordon may have to have Roger Goodell approve his request for Browns reinstatement, Florio reports. The reasoning behind this is Goodell OK’d a Gordon return last year under the terms of a treatment plan, with Florio adding that possible Goodell approval would center around whether or not the embattled receiver has violated the terms of that plan. Gordon’s believed to be at a Gainesville, Fla., treatment facility. He spent 90 days in a Gainesville rehab center last fall. While Florio doesn’t expect Goodell to stand in the way of a Gordon return, he would have the right to suspend Gordon for another year under the substance-abuse policy.

Jimmy Haslam did not comment when asked Saturday if the NFL needed to approve Gordon’s Browns reinstatement, and Mary Kay Cabot of the Cleveland Plain Dealer notes the league has not provided clarity on this situation yet. Haslam added he does not have a timetable for Gordon’s return.

Here’s the latest from the AFC North, shifting to a potentially troublesome situation in Pittsburgh:

Whether Marshawn Lynch opts to continue his football career in 2016 and whether he will play for the Seahawks if he does suit up this season are two very different questions, as Sheil Kapadia of ESPN.com writes. Lynch, 30, may well be having second thoughts about his decision to retire, but while Kapadia would not be surprised if Lynch chooses to return to the league, the ESPN scribe would be stunned if the Seahawks are the team to welcome him back.

Although Seattle controls Lynch’s rights through 2017, he is due $9MM in 2016, is coming off an injury-plagued season, and is at the point in his career when most running backs begin to wear down anyway. Plus, the club’s running game looked perfectly capable without Beast Mode in 2015. Theoretically, the team could trade him or negotiate a pay cut, but it is more likely that the Seahawks would simply release Lynch if he ultimately decides he is not done playing.

8:49pm: Foster’s three-year deal is worth a modest $9.6MM, according to Aditi Kinkhabwala of NFL.com, who tweets that the guarantee is only $2.75MM.

WEDNESDAY, 7:33am: Foster has signed a new three-year contract to remain with the Steelers, tweets Mark Kaboly of the Pittsburgh Tribune-Review.

TUESDAY, 8:33pm: Foster will in fact be re-signing with the Steelers, according to Rand Getlin of NFL.com (Twitter link).

Foster has been a mainstay along Pittsburgh’s offensive line during the past five years, averaging 15 starts per season during that time. The 30-year-old Foster is not only durable, but productive, as he graded as the league’s No. 16 guard last season, per Pro Football Focus. Per La Canfora, retaining Foster was a “priority” for the Steelers, who have been quietly negotiating a new contract.

Foster isn’t the only key free agent along the Steelers’ front five, as left tackle Kelvin Beachum is also set to hit the open market tomorrow. Beachum, who is recovering from an ACL tear, could still find a long list of suitors despite having recently suffered a serious injury.

For his part, Foster was listed among the honorable mentions in PFR’s Top 50 Free Agents list.

A look at the latest rumors as we draw closer to free agency:

Here’s the latest from around the AFC.

We’re only about 30 hours away from the 2015 NFL regular season getting underway, as the Patriots and Steelers, two AFC teams with plenty of Super Bowl wins under their belts, get set to kick off Thursday night’s action. While we look forward to that game, let’s round up a few items of note from around the AFC….