Texans’ DL Angelo Blackson has agreed to a pay cut, as Mark Berman of Fox 26 reports (via Twitter). Blackson was set to earn nearly $4MM this year, but that number will now drop to $2.5MM. 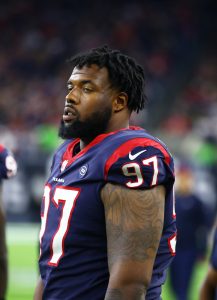 Blackson was selected by the Titans in the fourth round of the 2015 draft and spent the first two years of his career with Tennessee but was waived prior to the start of the 2017 season. He quickly hooked on with the Patriots’ taxi squad and was signed by Houston a few weeks later.

In 2018, his first full year in Houston, the Auburn product saw the most playing time of his career, appearing in all 16 games and 40% of the team’s defensive snaps. Although Pro Football Focus’ advanced metrics ranked him near the bottom of the league’s interior defenders that season, Houston re-signed him to a three-year, $12MM pact last March.

In 2019, Blackson again appeared in 40% of the Texans’ defensive snaps, recording 20 tackles in the process. But his overall game was still a bit lackluster, and if he did not accept a pay cut, he may have been released.

As Berman writes, the Texans have saved about $8MM of cap space between Blackson’s pay cut, Senio Kelemete‘s extension, and Zach Fulton‘s restructure. The team now has about $20MM of room, and due to the expected cap reduction in 2021, any rollover money will be valuable. Plus, the team also needs to stash some funds for the inevitable Deshaun Watson extension.

The Texans and defensive end Angelo Blackson agreed to a new three-year, $12MM deal, a source tells Adam Caplan of NFL.com (on Twitter). Blackson played in 40% of the team’s defensive snaps last season and emerged as a pleasant surprise for Houston.

Blackson first joined the Texans in 2017 after spending the previous two seasons with the Titans. He had just nine tackles across nine games in Year One with Houston, but he took on a larger role last year. Appearing in all 16 games (four starts), Blackson amassed 24 tackles, one sack, and three passes defensed. For what it’s worth, Pro Football Focus graded him as just the 99th ranked interior defender out of 112 qualified players.

The Texans still have lots of work to do on the defensive line. Christian Covington, Brandon Dunn, and Joel Heath (RFA) still need to have their contracts addressed.

Teams around the NFL continue to lock up their 2015 draft picks, and while we’ll dedicate full posts when first- or second-rounders sign their rookie contracts, we’ll pass along mid-to-late-round signings in round-up posts like this one. Here are the latest draft pick signings from around the league, with all salary info via Over The Cap:

Following his release from rehab, Johnny Manziel issued a statement through the Browns today, thanking the organization, his teammates, and fans for their patience and understanding over the last several weeks.

“I take full responsibility for my actions and it’s my intention to work very hard to regain everyone’s trust and respect,” Manziel said in his statement. “I understand that will take time and will only happen through what I do and not what I say. … I look forward to seeing my teammates next week and focusing on football and my desire to be the best possible player, teammate, and man that I can be.”

While we wait to see if Manziel’s sophomore year as an NFL player goes any better than his rookie season did, let’s check out a few more items from across the AFC….