The Saints have signed center Chris Watt, Larry Holder of NOLA.com was among those to report (on Twitter). 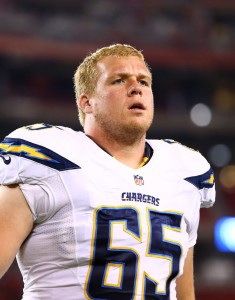 Watt, whom the Saints auditioned last week, didn’t play anywhere last season after the Chargers placed him on the physically unable to perform list in late August. The then-San Diego franchise ended up waiving Watt with a failed physical designation in November.

Prior to last season, Watt played in 17 games and started eight for the Chargers between 2014-15. Most of those appearances (12) and starts (five) came during Watt’s rookie year, after the Chargers selected the ex-Notre Dame standout in the third round of the draft.

There’s an outside chance Saints center Max Unger will miss the start of the season, so the 26-year-old Watt could crack their Week 1 lineup if he impresses over the summer. For now, Watt joins Senio Kelemete and Jack Allen as the Saints’ center-capable options behind Unger.

The Saints are are auditioning linebacker Mike Morgan and defensive tackle Tony McDaniel during their minicamp, according to Herbie Teope of NOLA.com and Joel Erickson of the Advocate (Twitter link).

Morgan, 29, was nominally the Seahawks’ starting strongside linebacker in 2016, but because Seattle spent so much time in nickel, Morgan’s defensive snaps were limited. Morgan’s contributions were further restricted by injury last year, as he spent eight weeks on injured reserve while dealing with a sports hernia. All told, Morgan played only 138 defensive snaps and posted just 10 tackles. His only other known interest this offseason came from the Jaguars, for whom he auditioned last month.

Like Morgan, McDaniel also spent the 2016 campaign with Seattle, and has in fact played for the Seahawks in three of the past four years. The 32-year-old McDaniel played on 45% of Seattle’s defensive snaps a season ago, racking up 43 tackles and grading as the league’s No. 52 interior defender in the process, per Pro Football Focus. McDaniel could have a path to playing time in New Orleans alongside Sheldon Rankins, especially if Nick Fairley‘s heart condition restricts his ability.

Other notable players working out for the Saints this week include offensive lineman Chris Watt, kicker Patrick Murray, and long snapper Thomas Gafford, per Teope.

Broncos running back Ronnie Hillman ended last season fourth on the depth chart, but he’s rebounded with an impressive, encouraging offseason, reports NFL.com’s Chris Wesseling. Hillman’s position coach Eric Studesville praised the third-year back, saying, “From when we started this spring in April forward, he has been unbelievable. He’s a completely different guy in the best possible way and I’m just excited about what he’s doing, how he’s approaching it, how he’s making plays on the field.”

During Chargers rookie minicap, third-rounder Chris Watt was working at right guard, “the same position of Jeromey Clary, who is to make $4.55 million in total compensation in 2014,” writes ESPN’s Eric D. Williams. “Watt lining up at right guard probably is not a coincidence.”

This comes on after an ESPN Insider piece (subscription required) about veterans whose jobs are in jeopardy in which Nathan Jahnke put the magnifying glass on Clary: “Thanks to the drafting of D.J. Fluker in 2013, Clary was moved from right tackle to right guard last year. The move didn’t work out well for Clary, who had the third-lowest run-block rating for all guards per PFF. In addition, the Chargers’ running backs averaged 4.6 yards per carry when running to the left compared to 3.6 yards per carry when running to the right, and it wouldn’t be surprising if Clary had something to do with that large difference.”