Bills tight end Dawson Knox will miss multiple weeks due to a broken hand (Twitter link via NFL.com’s Ian Rapoport). The Bills may opt to place Knox on short-term IR, allowing him to return after three missed games. 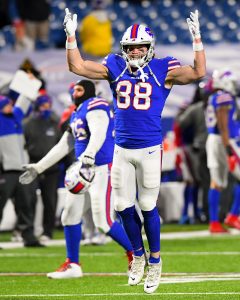 Knox, somehow, completed a 2-point conversion pass with the broken hand against the Titans. That fact wasn’t lost on the play’s receiver — quarterback Josh Allen.

“Huge shoutout to Dawson,” Allen said (via ESPN.com). “I was trying to call the play off — I was shaking my hands at [offensive coordinator Brian Daboll] like, ‘Don’t call it, we can’t do it.’ And [Knox] looked at me and said, ‘I got it. I’ll get it to ya.’ So, to put your body on the line like that and grit through it, that was a big-time play and that’s awesome when a teammate is willing to do that, and that’s why we love him.”

Knox is in the midst of a career year with 21 catches for 286 yards and five scores through six games. Fortunately for the Bills, they have a Week 7 bye plus a cushy stretch in Weeks 8-10. If Knox can’t go against the Dolphins, Jaguars, or even the Jets, it wouldn’t be the end of the world.

The Bills may be seeking some reinforcement at tight end. Josina Anderson tweets that “apprehensions with production [and] consistency at the Bills tight end spot are still a topic of conversation” within the organization.

With all due respect to the team’s tight ends, this assessment makes plenty of sense. Josh Allen threw for 4,544 yards and 37 touchdowns last season, but the group of tight ends barely cracked 400 receiving yards. 2019 third-rounder Dawson Knox will continue to lead the depth chart, and the 24-year-old has averaged only 25 yards per game through his first two years in the NFL (27 games).

The Bills did bring in veteran Jacob Hollister this offseason, but the veteran isn’t known for his pass-catching prowess. The organization also added undrafted free agent Quintin Morris, pairing the additions with holdovers like Tommy Sweeney and Nate Becker. Considering the lack of inspiring options, Anderson notes that the situation is “something to keep an eye on,” especially considering the availability of Eagles tight end Zach Ertz. If Buffalo ends up pulling off that kind of deal, it sounds like the current grouping of tight ends would be ready for the extra reinforcement.

“How I look at that stuff is whoever they bring in, that’s just great competition for the room,” Knox said (via Sal Maiorana of the Rochester Democrat and Chronicle). “I love that Jacob’s (Hollister) here now, he’s a great dude. No matter who they bring in, whether it’s a rookie or an All-Pro like Zach, I think it’ll be great just to elevate the competition. Iron sharpens iron and that’s a big philosophy that I have.”

The Bills have run into COVID-19 trouble. They are placing Dawson Knox on their reserve/COVID-19 list. The second-year tight end tested positive for the coronavirus, Tom Pelissero of NFL.com tweets. The Bills confirmed the positive test.

The game remains on for noon CT Sunday, however. Tyler Kroft and Reggie Gilliam are the other tight ends on the Bills’ roster. Buffalo promoted four players from its practice squad — guard Jordan Devey, linebacker Andre Smith, cornerback Dane Jackson and wide receiver Duke Williams — but has not made any other moves at tight end.

This game becomes the latest to monitor as one that could cause a schedule change. The timing is similar to Cam Newton‘s positive test weeks ago, and with the league’s beefed-up protocols in the wake of Newton’s positive and the Titans’ outbreak, the Bills will be extremely shorthanded at tight end. A rookie UDFA, Gilliam was already on Buffalo’s active roster along with Knox, Smith and Kroft. The Bills have Kroft and Gilliam available at the position ahead of Sunday’s Jets rematch. The latter has yet to play in a game.

Kroft’s wife going into labor and delivering the couple’s baby Friday morning led to the veteran tight end being spared from this chain reaction, per Adam Schefter of ESPN.com (on Twitter). Kroft attended Bills practice Friday, but Schefter notes his missing position meetings allowed him to avoid getting caught up in this potential outbreak. A former Bengals draftee, Kroft signed with the Bills last year. Knox and Kroft each have six catches this season — most among Bills tight ends; the latter has scored two touchdowns.

There seems to be a growing trend of NFL media personalities making the jump to front offices. Mike Mayock recently left NFL Network to become the Raiders’ GM, and since then we’ve heard rumors about a handful of big names. Back in May we heard that the Jets were targeting Daniel Jeremiah, also of NFL Network, for a prominent role in their front office. New Jets GM Joe Douglas apparently wanted him, but Jeremiah wasn’t interested. Now, it turns out the Jets aren’t the only ones that have pursued the 41-year-old draft analyst. “Jeremiah is continually rebuffing NFL advances,” according to Lindsay Jones of The Athletic.

Jones also writes that she thinks “we’ll continue to hear Louis Riddick’s name a lot in personnel circles.” Riddick, an ESPN analyst, interviewed for the Giants’ GM job back in late 2017 before they ultimately hired Dave Gettleman. Both Riddick and Jeremiah are very highly regarded, so it’s not shocking news. Still, it’s an interesting development. How Mayock fares in Oakland might go a long way in determining how many teams take this approach in the future.

Here’s more from around the league on a quiet Saturday evening:

The Bills’ draft class is in the books. On Friday, the Bills announced the signing of third-round tight end Dawson Knox to a four-year contract, putting a bow on their eight-man group. 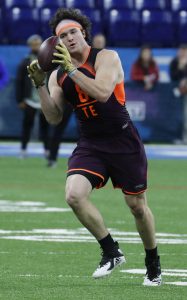 Knox skipped his senior year at Ole Miss to turn pro, with the belief that he would go in the second round. Knox slipped a bit further, but he still has a solid opportunity ahead of him. In the spring, Knox impressed with the first-teamers while Tyler Kroft and Jason Croom nursed injuries.

The tight end did not score a touchdown last year and was overshadowed somewhat by the presence of A.J. Brown and D.K. Metcalf. Still, he possesses high-end athleticism for the tight end position, as evidenced by his 18.9 yards per catch in 2018.

Here’s the full rundown of the Bills’ draft class, via PFR’s tracker:

The Antonio Brown saga was the defining story of the NFL season. It dominated news coverage in the aftermath of the Super Bowl, all the way up until he was finally traded to the Raiders. But the drama apparently didn’t end there. Brown’s trade has implications for every team in the league, and for every player who may want to force his way out in the future. The league has taken note, and teams are apparently quite concerned. “Multiple high-ranking sources” told Jeremy Fowler of ESPN.com that they’re fearful “Brown forcing his way out of a contract with three years left” will set a “dangerous” precedent.

Executives were outraged by the move according to Fowler, and one source derided the fact that Brown essentially acted like a free agent in picking his new team. “Other star players see this and might want to do the same,” another source said. Another source was surprised that Pittsburgh decided to cave and meet Brown’s demands instead of playing hardball, saying it was “un-Steeler-like” of the organization. It remains to be seen whether Brown’s actions will actually inspire other players to follow suit, but the league is clearly getting ready to fight back in case they do.