Saints defensive coordinator Dennis Allen is expected to sign a new deal that will keep him in New Orleans, according to Ian Rapoport of NFL.com (Twitter link).

Earlier today, reports surfaced indicating Allen was presumptive Bengals head coach Zac Taylor‘s top choice to take over as DC in Cincinnati. Allen’s contract with the Saints had expired, so the Bengals wouldn’t have had to negotiate any sort of compensation in order to land Allen. However, it appears New Orleans was able to convince Allen to stay in the role he’s held since 2015.

The Bengal weren’t the only rival club to express interest in Allen this offseason, as the Dolphins also interviewed him for their head coaching position. Allen, spent three seasons as the Raiders’ head coach, compiling an abysmal record of 8-28. But he’s respected in coaching circles, and his work with the Saints has not gone unnoticed.

Under former defensive coordinator Rob Ryan, New Orleans regularly posted one of the NFL’s worst results, and the unit continued to struggle during Allen’s first full season as DC (2016), finishing 31st in DVOA, Football Outsiders’ efficiency metric. However, the Saints vaulted up to eighth in defensive DVOA in 2017 and ranked 11th this past season. New Orleans ranked 14th and 19th in points allowed and yardage allowed, respectively, in 2018.

While players such as defensive end Alex Okafor, linebacker Craig Robertson, and cornerback P.J. Williams are set to reach unrestricted free agency in March, the Saints don’t project to lose any key defensive pieces this offseason. As such, Allen could find himself in head coaching rumors again next year, provided New Orleans’ defense continues to excel.

The Bengals will formally announce Zac Taylor as their next head coach tomorrow, and the team has already tabbed Brian Callahan to serve as Taylor’s offensive coordinator.

There is less clarity on Cincinnati’s defensive coordinator vacancy, though a couple of big-name candidates have been mentioned as possibilities. Reports from two weeks ago suggested that Jack Del Rio and John Fox are potential targets, and now Alex Marvez of SiriusXM NFL Radio has added another name to the mix.

Per Marvez (Twitter link), the Bengals are interested in Dennis Allen, who has served as the Saints’ DC since taking over for Rob Ryan during the 2015 season. Allen has rebuilt his reputation in coaching circles after a difficult stint as the Raiders’ head coach from 2012-14, and his name has popped up as a head coaching candidate in the last couple of years. His unit ranked second in the league against the run and tied for fifth in the NFL in sacks in 2018.

In a separate tweet, Marvez appears to suggest that Allen is the Bengals’ top choice for the job and that Del Rio and Fox may no longer be under strong consideration. Marvez reports that, if Cincinnati cannot get Allen, the club will turn its attention to Dom Capers, who worked as the Packers’ DC from 2009-17.

We recently learned that Allen’s contract with New Orleans is up, so he is a free agent at the moment. The Saints reportedly want to keep him, but they now have some serious competition for his services. 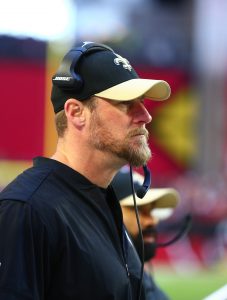 The Dolphins requested permission to speak with Saints defensive coordinator Dennis Allen, according to Ian Rapoport of NFL.com (on Twitter). This marks Allen’s first known interview for a head coaching job in this cycle.

Allen replaced Rob Ryan during the 2015 season as the interim defensive coordinator in New Orleans and was retained the following offseason. The Saints’ D has made big strides since then, so it’s no surprise that Allen is in the mix for a move back up the ladder.

In 2018, the Saints’ defense ranked second in the league against the run and tied for fifth in the NFL in sacks. Allen may have to explain what went wrong in Oakland – he went 8-26 in two-plus years – but his recent results are impressive and could vault him into the top job in Miami.

The date of Allen’s Miami interview is yet to be determined. For now, Allen will focus on getting the Saints ready for their Jan. 13 home playoff game against either the Cowboys, Seahawks, and Eagles.

FEBRUARY 2nd: The Saints have formally announced that Allen will stay on as the team’s defensive coordinator. They have also confirmed their other moves on the staff, including the appointment of Dan Campbell as tight ends coach/assistant head coach.

JANUARY 13th: If the Saints haven’t already officially agreed to a deal with Dennis Allen to remain the team’s defensive coordinator, they’ll do so soon, says Alex Marvez of FOX Sports (Twitter link). Allen, who replaced Rob Ryan during the 2015 season as the interim defensive coordinator in New Orleans, will be retained as the Saints’ permanent DC.

A week ago, Saints head coach Sean Payton was asked during his end-of-year press conference if Allen would be brought back as the team’s defensive coordinator, and declined to say one way or the other. However, Payton indicated at the time that Allen did a good job stepping in for Ryan, and would likely return for the 2016 season.

Allen, who was on the Saints’ coaching staff from 2006 to 2010, working with the defensive line and the secondary, earned his first defensive coordinator job with the Broncos in 2011 before becoming the head coach of the Raiders. After leaving Oakland, Allen returned to New Orleans in 2015 as a defensive assistant.

The Saints’ defense was one of the NFL’s worst in 2015, ranking 31st in the league in yards allowed per game (413.8) and dead last in points allowed per game (29.8) for the season. Still, those numbers improved slightly under Allen. In the team’s six games following the change at defensive coordinator, New Orleans gave up 395.3 yards and 26.8 points per contest.

If and when the Saints officially name Allen as their permanent defensive coordinator heading into the 2016 season, the club will become the third club this month to announce a DC hire. The Colts hired Ted Monachino and the Dolphins hired Vance Joseph within the last week.

Earlier today, we heard that the Browns intend to interview Cincinnati offensive coordinator Hue Jackson on Sunday, less than 24 hours after Jackson’s Bengals face the Steelers in Saturday’s AFC Wild Card game. Jackson won’t be the only coach interviewed by the Browns that day – Cleveland also plans to speak to Bengals defensive coordinator Paul Guenther – and apparently the Browns won’t be the only team that meets with Jackson.

According to Albert Breer of the NFL Network (Twitter link), in addition to interviewing with the Browns, Jackson will also meet with the 49ers and Dolphins on Sunday. Given his full schedule, Jackson will be letting those teams come to him, conducting the interviews in Cincinnati, rather than traveling individually to meet with each of them.

Here are a few more of Wednesday’s coaching-related updates:

As Christopher Dabe of NOLA.com details, new Saints defensive coordinator Dennis Allen received plenty of praise from head coach Sean Payton this week after the team’s win over the Buccaneers, in which New Orleans held Tampa Bay to just 17 points.

Since Payton’s future remains uncertain, it’s hard to say for sure that Allen’s job as Saints DC is safe next season — a new head coach may want to bring his own assistants. Still, if Allen finishes the season strong after taking over the NFL’s worst defense, he shouldn’t have any trouble finding work for 2016.