DeAndre Baker‘s future with the Giants is up in the air after his arrest on eight charges stemming from an alleged armed robbery earlier this month. The Giants have told the cornerback to stay away from their offseason activities, but since they are unfolding in a virtual capacity, such a stance has a less noticeable effect. And Baker scored a victory this week. A judge approved a request by Baker’s attorney that will allow the second-year cornerback to leave the state, Dan Duggan of The Athletic tweets. This would allow Baker to travel from Florida to New Jersey for Giants training camp. The Giants have kept Baker away from their voluntary virtual offseason since the incident but banning him from mandatory training camp would be a suspension. The team has not crossed that bridge yet.

Here is the latest from the NFC East, moving first to some of the happenings involving Washington’s offense:

Barring a major surprise or trade, the NFL Draft should kick off with the Bengals selecting LSU quarterback Joe Burrow at No. 1 overall and the Redskins taking Ohio State defensive end Chase Young with the second pick. Then, at No. 3, many expect the Lions to tap Buckeyes cornerback Jeff Okudah as a replacement for Darius Slay.

When the Giants pick at No. 4, however, things could get interesting. The Giants could be a prime position to trade down and load up in the later rounds. If they stand pat, GM Dave Gettleman could be tempted by one of his beloved “Hog Mollies,” an imposing tackle to help fortify their offensive line.

However, in his latest mock draft, ESPN.com’s Todd McShay predicts that the G-Men will take Clemson outside linebacker Isaiah Simmons. The versatile defender could help slow down the run, put pressure on opposing QBs, and help turn around a defense that allowed more than 28 points per game in 2019.

While Dwayne Haskins‘ status is murkier than it would have been had the Redskins retained Bruce Allen, the Ron Rivera regime’s plan does not include giving Cam Newton a chance to reignite his career. 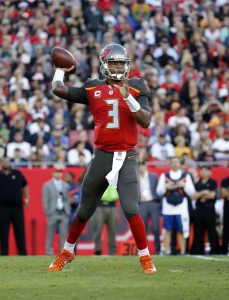 The Redskins have been linked to Tua Tagovailoa at No. 2 overall, but they will not add a high-profile veteran quarterback. Even if the Panthers cut Newton, the Redskins are not expected to be interested, John Keim of ESPN.com notes. The same goes for Jameis Winston, who is now in search of a new team after the Buccaneers landed Tom Brady.

Washington does not want to put Haskins in a position where he would be the clear backup, Keim adds. That would be the case if Newton and Rivera reunited. Each of Newton’s 124 starts came when Rivera was Carolina’s coach.

The Panthers are having trouble finding a trade partner for Newton, which makes sense given the COVID-19 pandemic preventing teams from having their medical personnel examine players with injury concerns. The Panthers are likely to release the former MVP soon. Winston has not been linked to any teams since the Bucs signed Brady.

Haskins finished with by far the worst QBR figure among qualified passers last season. Daniel Snyder, however, pushed for the Ohio State prospect going into the draft. Although Rivera mentioned Alex Smith as a candidate to start in 2020, the odds may still be against the former No. 1 overall pick playing again. Unless the Redskins draft Tagovailoa over Chase Young, Haskins remains the best bet to take the snaps in Week 1.

New Redskins coach Ron Rivera has insisted he wants to have a quarterback competition, and that nothing will be handed to second-year incumbent Dwayne Haskins. Haskins doesn’t have any problem with that, and he said as much to reporters during a recent community event. “That’s cool,” Haskins said of Rivera’s remarks, via Peter Hailey of NBC Sports. “I’m just going to have to work hard and eventually take it over. Just do your best to be accountable for what you have to do and be ready to go.” That’s obviously the type of attitude that his new coaching staff will like to hear.

Rivera specifically shouted out Alex Smith recently and indicated he could even be back with the team in 2020, although that still seems pretty unlikely. By all accounts, Haskins will almost certainly be under center for the Redskins in Week 1 even though the staff plans to make him earn it. Haskins took over for Case Keenum midway through last season, and was up and down like most rookies. The Ohio State product struggled early on, but started to play a lot better in his last couple of games.

Although since-fired team president Bruce Allen took most of the heat for the Redskins’ personnel decisions during the 2010s, Dan Snyder has continued to play a role in the franchise’s football operations. Allen was also believed to be on the side of drafting Dwayne Haskins, but John Keim and Jason Reid of ESPN.com write Snyder appeared to lead that charge — even though the owner once criticized for his big-ticket moves has contributed less input on that front in recent years. Some in Washington’s building placed a third-round grade on Haskins, per Keim and Reid. Haskins was viewed as a first-round pick for most of the pre-draft process. While Ron Rivera is expected to have more control over Redskins personnel matters than Jay Gruden, sources informed the ESPN duo they still expect Snyder to be involved.

Here is the latest out of Washington:

Dwayne Haskins Done For The Year

Dwayne Haskins‘ rookie year is in the books. The Redskins have ruled out their young quarterback for Week 17 as he deals with an ankle injury, interim head coach Bill Callahan announced Monday. 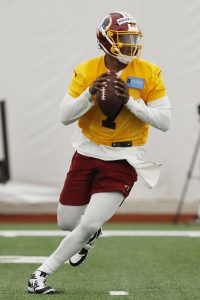 Haskins went down with the ankle injury late in Washington’s loss to the Giants this past week. He apparently lobbied to come back into the game, but Redskins owner Dan Snyder personally intervened and told him not to go back into the game. That was certainly an unusual development, and one that signaled the franchise would be extremely cautious with their young signal-caller. With Haskins inactive, Case Keenum will presumably draw the start in the finale against the Cowboys, while Colt McCoy will back him up.

After setting records during his one year as Ohio State’s starter, Haskins was drafted 15th overall back in April. After starting the year off on the bench behind Keenum, Haskins took over around the midpoint of the season, not too long after Jay Gruden was fired. He initially struggled mightily with a depleted offense around him, but had started to come on strong the last couple of weeks.

He had his best game as a pro two weeks ago in a near-upset win over the Eagles, completing 19 of 28 passes for 261 yards and two touchdowns. He was also playing quite well before going down against New York. He’ll finish his rookie year having completed 58.6 percent of his passes for 1,365 yards with seven touchdowns and seven interceptions, while averaging 6.7 yards per attempt. Washington is headed for a crucial offseason, as they must pick a new head coach while also dramatically upgrading their weapons. Barring something crazy happening, Haskins will be under center in Week 1 come 2020.

Here are the key injuries which we’ve seen some reporting on:

Interim Redskins coach Bill Callahan announced the Dwayne Haskins era will begin in full. The team named its first-round quarterback the starter for the rest of this season.

Haskins has made one start thus far and played in three games. He was the third Redskins quarterback summoned to action this season, following Case Keenum and Colt McCoy. But the two veterans will play behind the rookie going forward.

With the Redskins exiting their bye at 1-8, devoting some time to developing Haskins makes sense. The rookie has faced scrutiny early and has yet to throw his first touchdown pass. He’s completed 27 of 44 passes for 284 yards and four interceptions thus far. Haskins threw a Big Ten-record 50 touchdown passes in his lone season as the Buckeyes’ starter.

Washington still has Alex Smith under contract, but the 14-year veteran has undergone 17 surgeries over the past year to repair his severe leg injury. Smith is not a lock to resume his career, though he is interested in doing so. This led the Redskins to Haskins at No. 15 overall. And the plan is to give him this season’s final seven games to develop.

Washington head coach Bill Callahan announced today after practice that rookie quarterback Dwayne Haskins will make his first career start on Sunday against the Bills, according to JP Finlay of NBC Sports. Haskins has appeared in two games on the season, but has completed only 12 of 22 pass attempts with four interceptions and no touchdowns. Callahan will hope getting a chance to start will put Haskins in a better situation to succeed.

Haskins was expected to be one of the top two quarterbacks selected in the draft, but after the Giants surprised many by selecting Daniel Jones out of Duke, Haskins fell to Washington with the 15th overall pick. Since reports have emerged that there was a strong divide in the organization on Haskins as a prospect with ownership favoring the selection.

Many in and around the organization consistently tried to tamper expectations, reiterating a belief that Haskins wasn’t ready for NFL action. However, the two quarterbacks above Haskins, Case Keenum and Colt McCoy, have both dealt with their share of struggles and injuries. Currently at 1-7 and clearly one of the three worst teams in the league, it appears Washington has decided to give their young prospect a chance to prove himself.