The Falcons have locked up their long snapper for years to come. On Friday, Josh Harris signed a three-year extension that will keep him in Atlanta through the 2021 season. 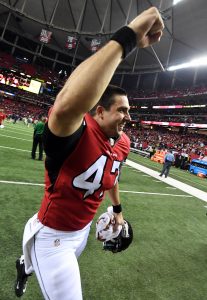 Harris joined the Falcons in 2012 and has been the club’s featured long snapper in every game since except for one. The Georgia native also has seven special teams tackles to his credit.

The Steelers have become the NFL’s first team to formally announce its roster moves to get down to 53 players in advance of this afternoon’s deadline. According to a team release, Pittsburgh has made the following moves:

Those 20 cuts would get the Steelers down to 54 players from 75, since the team also traded punter Brad Wing yesterday. The club has also officially signed cornerback Ross Cockrell, bringing the roster count to 55. The final two moves will be to add running back Le’Veon Bell and wide receiver Martavis Bryant to the reserve/suspended list to start the year.

12:32pm: The Steelers have released running back LeGarrette Blount, opening up a spot on the 53-man roster, the team announced today (Twitter link). Pittsburgh becomes the second AFC North team today to cut ties with a notable recently-signed running back, with the Browns waiving Ben Tate earlier in the day. 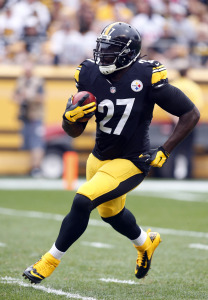 Blount, who signed with the Steelers in March after a successful postseason reason with the Patriots, came into the season expecting to share the workload with Le’Veon Bell. However, Bell has emerged as one of the top backs in the NFL, relegating Blount to backup duty — the former Buccaneer and Patriot has carried the ball just 65 times this year for 266 yards and a pair of touchdowns.

Things came to a head in Tennessee last night, when Blount left the field before the end of the Steelers’ win over the Titans, as Bell was in the midst of racking up more than 200 yards on the ground. The display didn’t sit well with other players on the roster, as Ray Fittipaldo of the Pittsburgh Post-Gazette details. Gerry Dulac of the Post-Gazette (Twitter links) suggested this afternoon that some from of discipline – at least a suspension – would be handed down by head coach Mike Tomlin, but the club elected to go ahead and cut Blount instead.

Like Tate and other players cut after the trade deadline, Blount will have to pass through waivers before becoming a free agent. For teams in need of a running back, Blount will have appeal because of his talent and his inexpensive price tag, but after Monday’s incident, his impact on the clubhouse may be a concern.

As for the Steelers, Dulac (Twitter link) indicated that releasing Blount would likely open up the door for the team to give Dri Archer a larger workload and to sign Josh Harris from off the practice squad.

The Falcons have locked up a pair of key pieces on their special teams unit to long-term contracts, according to Field Yates of ESPN.com (Twitter links), who reports that the team has inked punter Matt Bosher to an extension through the 2019 season and long snapper Josh Harris to a contract through 2018.

Bosher, who turns 27 next month, has been the Falcons’ full-time punter since being selected by the team in the sixth round of the 2011 draft. According to Pro Football Focus’ advanced grades (subscription required), he has steadily improved in each of his first three NFL seasons, ranking 25th in his rookie season, 16th in 2012, and fifth last year. Yates reports that Bosher’s new deal, which keeps him under team control for the next five seasons after this one, includes a $2.5MM signing bonus and $5.95MM in total guaranteed money.

As for Harris, this is his third season as Atlanta’s regular long snapper. Terms of his new deal aren’t known, but I’d imagine he’ll be earning something close to the minimum salary, perhaps with a modest signing bonus on his four-year contract extension.

Listed below are the Sunday roster moves for the four AFC North teams. Following the 53-man roster cutdown deadline yesterday, many teams will make slight tweaks to their rosters, claiming players off waivers or signing guys who clear waivers. Those transactions are noted below.

The Steelers have become the latest team to reduce their roster count to 53 players in advance of this afternoon’s deadline. Here are the 22 players cut from the club’s active roster today, per a press release:

Let’s round up some links from around the league as Sunday morning turns into Sunday afternoon:

As August approaches, teams continue to shuffle around their 90-man rosters, making minor signings and cuts. We’ll round up Tuesday’s minor transactions right here, with the latest moves added to the top of the page throughout the day: