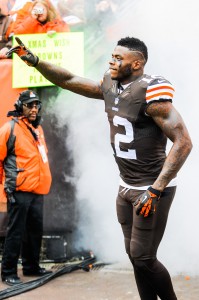 On the heels of his reinstatement into the NFL, Josh Gordon detailed his extensive drug use and recovery in a revealing Q&A with GQ.

In the piece, Gordon admits he was a highly functioning addict who would drink “a couple shots” before games, including his back-to-back 200-yard performances during his standout 2013 campaign. Gordon said his drug use began in the seventh grade with marijuana and Xanax, and he believes he has had something in his system for every game of his career.

When asked why his recovery this time is different, the receiver said, “Every time I would try to stop, it would be for the wrong reason. … Last time, I wanted to do it to save my career. Just for the job. [Now] I have the positive reinforcement and motivation of having a daughter and stuff like that, but kids can’t save you in that aspect. Only thing saving me at this point and time, and the difference between now and then, is that I’m doing it for myself. And I want something more for myself.”

Gordon will be allowed to begin practicing with the Browns on November 20, with the hopes of getting back on the field for the team’s Week 13 matchup with the Chargers.

Here is the latest from Cleveland: