Despite missing practice Friday, Jerry Jeudy remains on track to suit up for the Broncos in Week 8. As expected, Denver is set to activate its second-year wide receiver from IR, Tom Pelissero of NFL.com tweets. 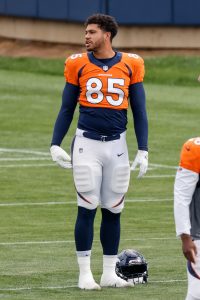 Jeudy experienced soreness after going through ramp-up workouts this week. The 2020 first-round pick is attempting to return from the high ankle sprain that cost him six games. His re-emergence stands to help a Broncos passing attack that has struggled over the past month.

The Alabama product led the Broncos with 856 receiving yards last season and generated considerable breakout buzz this offseason. After catching six passes for 72 yards in the team’s Week 1 win over the Giants, Jeudy went down midway through that game and saw his momentum stonewalled. Jeudy’s absence, and K.J. Hamler‘s season-ending injuries, stripped the Broncos of considerable weaponry. A four-game losing streak commenced.

The Broncos rank 24th offensively and have scored just 64 points during their four-game skid. During Jeudy’s career, the Broncos have yet to go through a game with he and Courtland Sutton healthy. Sutton missed Week 1 of the 2020 season and suffered an ACL tear during Denver’s Week 2 game last year. Sutton returned in New York to start this season, but Jeudy leaving that game again delayed the team’s hopes of seeing its top two receivers in action.

These setbacks have certainly altered the Broncos’ plan at wide receiver. With Sutton and Tim Patrick due for free agency in 2022, the Broncos will have decisions to make regarding their pass catchers soon.

Teddy Bridgewater will also have tight end Albert Okwuegbunam back in action, with 9News’ Mike Klis noting the second-year tight end is set to come off IR for Sunday’s game against Washington (Twitter link). Okwuegbunam has missed the past three games with a hamstring injury, further stripping Bridgewater of targets. The Missouri product showed some promise in September, after recovering from the ACL tear that ended his rookie season.

With the Broncos on track to have Jerry Jeudy back in Week 8, they are sending John Brown back to free agency. The Broncos released Brown from their practice squad Tuesday.

Denver added Brown earlier this month. The team had lost both Jeudy and K.J. Hamler in September and has played without both over the past four games. While Hamler is done for the year, Jeudy is on track to return from his high ankle sprain Sunday against Washington.

Days after signing the accomplished wideout, the Broncos bumped Brown up from their practice squad to their active roster. Brown, 31, reverted to the Broncos’ taxi squad after each of their past two games. The two-time 1,000-yard receiver did not make a catch as a Bronco. His one target resulted in a Teddy Bridgewater underthrown pass and an interception during Thursday’s loss in Cleveland.

After playing with the Cardinals, Ravens and Bills from 2014-20, Brown caught on with the Raiders this offseason. However, that stay ended after Brown requested his release late this summer. After spending several weeks in free agency, Brown landed an opportunity in Denver. The former third-round pick has 4,748 career receiving yards and 31 touchdown grabs.

The Broncos also designated tight end Albert Okwuegbunam to return from IR. The second-year pro serves as Denver’s No. 2 tight end and an auxiliary pass catcher. He caught nine passes for 57 yards in the Broncos’ first four games this season but missed time with a hamstring injury. The Mizzou product is eligible to come off IR ahead of Week 8. He and Jeudy would give Denver some much-needed receiving help in a key game for the team’s fading playoff hopes.

The hits just keep on coming for the Broncos. Rookie tight end Albert Okwuegbunam suffered a torn ACL during the team’s loss to the Falcons yesterday, a source told Mike Klis of Denver 9 News (Twitter link).

Needless to say, Okwuegbunam will be done for the rest of the season. The Broncos drafted the Missouri product back in April, and this is a tough way for his rookie season to end. He was inactive the first four games of the season, but had started to play a real role on offense in recent weeks. He was playing a solid chunk of the offensive snaps, and in Denver’s Week 7 loss to the Chiefs he had seven catches for 60 yards.

All told, he’ll finish the year with 11 catches for 121 yards and a touchdown in four contests. Noah Fant has been playing through a lingering ankle injury which he again briefly re-aggravated on Sunday, and his health will be even more important moving forward. Jake Butt is currently on IR, which means Nick Vannett will likely see an increase in snaps in Okwuegbunam’s absence. Fortunately, it’s still early enough that Okwuegbunam should be able to make a full recovery in time for the start of his sophomore campaign.

As Tua Tagovailoa continues to rehab from a hip injury, the quarterback is uncertain whether he’ll enter the NFL Draft or stay at Alabama for another season. In a conversation with Cecil Hurt of TideSports.com (and passed along by Ian Rapoport of NFL.com on Twitter), Tagovailoa said he’ll continue to discuss his future with his parents in anticipation of the January 20th deadline to declare for the draft.

“If I leave, I think the risk is a little higher. That risk would be how far do I drop in the draft. To me, it’s 50-50 between going in the first round and possibly going in the second round. If I go somewhere from first (overall) to around 24th, the money will be set. But let’s say — and I am just picking a number — that I go to the 31st pick. That would be about 9 million dollars. That’s a lot of money, an amount of money I’ve never had before, but it’s not high first-round money and you can never make that money up. They say you can (make it up) on your next contract but money lost is money lost to me.

“Those are the deciding factors. If my parents tell me that they think I should leave, that is obviously going to be a factor. But so far, they’ve told me that it’s my decision.”

The quarterback doesn’t have a timetable for his return from injury. Even with the ailment, we recently heard that Tagovailoa would still be a first-round pick in the 2020 draft.