The NFL dead period is officially over, and things are heating up as training camps open. The Bears have agreed to trade receiver Anthony Miller to the Texans, sources told Mike Garafolo of NFL Network (Twitter link). 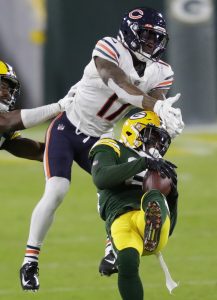 Here are the details of the deal, via ESPN.com’s Field Yates (on Twitter):

A divorce between Miller and Chicago has seemed likely most of this year, and now it’s official. Back in March we heard the team was shopping him, and about a month later it was reported the Bears had held trade talks with a number of teams. The 51st overall pick of the 2018 draft, Miller has flashed lots of potential at times but was a big disappointment in 2020.

The emergence of rookie Darnell Mooney last year made Miller expendable in Chicago. It never really kept him off the field, but Miller dealt with significant shoulder issues in both 2018 and 2019. His rookie season he caught seven touchdowns, and he had 656 yards as a sophomore. But he took a step back last season, only finishing with 49 catches for 485 yards despite playing all 16 games.

From the Texans’ perspective, it makes a lot of sense. They’re almost certainly entering a rebuilding year in 2021, so it can’t hurt to take a look at a young player entering the final season of his rookie deal. Miller has shown some promise in the past, and Houston has a pretty uninspiring receiving group outside of Brandin Cooks after letting Will Fuller walk in free agency.

Anthony Miller came up in trade rumors at the start of free agency and popped up again as a movable piece closer to the draft. The Bears ended up holding onto their contract-year slot receiver, but this certainly does not mean Miller will be in Chicago this season.

Miller’s trade-block status was not about obtaining value for a player the Bears do not plan to re-sign, with Adam Jahns of The Athletic noting the former second-round pick is on Chicago’s roster bubble going into training camp (subscription required).

Darnell Mooney usurped Miller as the Bears’ No. 2 wide receiver last season, playing 73% of the team’s offensive snaps (to Miller’s 55%) and outgaining him 631-485 through the air. Neither surpassed 10.5 yards per catch, however, for a still-Allen Robinson-dependent passing attack. Miller has flashed in the past, catching seven touchdown passes while playing through injury as a rookie and posting 656 receiving yards with Mitchell Trubisky at the helm in 2019. The Bears will still need to see more come camp.

Rookie sixth-rounder Dazz Newsome is sidelined with a broken collarbone, and although Goodwin will be on time to camp after failing to qualify for the U.S. Olympic team in the long jump, the speedster has not caught a pass in a game since November 2019. Ridley and Wims’ roster statuses appear more tenuous than Miller’s as well, with Jahns adding the Bears would likely be more willing to carry Miller onto the roster after cutdown day compared to the other two. Miller is set to earn $1.21MM in base salary this season.

A potential big trade could be in the works. The Bears have been discussing a deal involving receiver Anthony Miller with a “number of teams,” Ian Rapoport of NFL Network tweets.

We heard a few weeks ago that the team was shopping him, and it sounds like they’re receiving some real interest. Chicago has franchise tagged Allen Robinson, and they had Darnell Mooney breakout last season, making Miller expendable. He’s heading into the final year of his rookie deal, and the team clearly wants to get something for him before he’d presumably walk in free agency.

The 51st overall pick of the 2018 draft, Miller has flashed plenty of big-time potential but has never been able to fully deliver on it. He’s only missed one pro game, but has dealt with serious shoulder issues that have limited him in the past. He caught seven touchdowns as a rookie, then had 52 catches for 652 yards in 2019.

This past season his production dipped, as he had 49 receptions for 485 yards and two touchdowns. The less than 10 yards a reception isn’t great, and his stock likely took a hit. Still he’s only 26, and signed very cheaply for 2021, so it’s not surprising that teams are engaging in discussions. He could be an intriguing flyer with some real upside for a team in need of pass-catching help.

The Bears do not know who their starting quarterback will be yet, but they might have determined one player will not fit in their 2021 passing attack.

Chicago is discussing Anthony Miller in trades, Adam Schefter of ESPN.com tweets. The former second-round pick is entering the final year of his rookie deal. Miller is due a $1.21MM base salary next season. He is likely to be dealt, Schefter adds.

Allen Robinson is back, via the franchise tag, and the Bears also have Darnell Mooney coming back as a supporting-caster. The Bears traded up for Mooney last year. While Miller would seemingly fit as an additional auxiliary option and is not a financial hindrance, Bears brass evidently has seen enough to dangle him in trade talks.

Although Miller has battled injuries as a pro, he has only missed one game since the Bears drafted him. The slot option has only eclipsed 500 receiving yards in one of his three seasons, but Chicago’s quarterback situation — largely a Mitchell Trubisky-led setup during Miller’s tenure — did not exactly make for the best environment for a young receiver to develop. It will be interesting to see what the Bears can collect in a deal for the 26-year-old target.

The Bears drafted running back David Montgomery in the third round back in April, not long after they traded away Jordan Howard. Montgomery has the opportunity to earn a large role this offseason, and so far it sounds like he’s been seizing it. Per Adam Jahns of The Athletic, Montgomery was lighting up the Bears’ OTAs and minicamp. Jahns writes that the Iowa State product “led the rookies, if not the entire team, in highlights made during the offseason program.”

Montgomery was somewhat of a bruising runner at Iowa State, so there was some concern coming out of college about how he’d fare in the passing game. That hasn’t been an issue so far, as Jahns writes that he “excelled in running routes and catching passes,” and that he “looked like a problem for the Bears’ defense.” Per Jahns, Montgomery has both teammates and coaches excited. Tarik Cohen will play his usual role, but he’s never going to be able to handle a full allotment of snaps with his frame. It’s early, but it sounds like Montgomery could take over a featured role as a rookie.

Anthony Miller showed promise for the Bears as a rookie, hauling in seven touchdown receptions and being a key player from the outset of the team’s NFC North championship season. The Memphis product dealt with a shoulder injury, however, for much of the season. Miller said he dislocated his shoulder at least five times during his rookie campaign, with Colleen Kane of the Chicago Tribune noting the first such dislocation came in September and the last had him a shell of his optimal version. By season’s end, Miller had faded, finishing his first regular season with a four-catch, 25-yard December. Miller underwent surgery to repair a torn labrum in January and expects to be limited throughout the Bears’ offseason program, per Kane, but understandably anticipates a production increase as an NFL sophomore — should he sufficiently recover from this ailment.

Patriots Trade No. 51 Choice To Bears

After standing pat with both of their first-round picks, the Patriots are up to their usual tricks on Day 2 of this draft.

The Pats are sending their No. 51 overall pick to the Bears, Jeff Howe of The Athletic tweets, and they’ll acquire a 2019 second-round choice to do so. Field Yates of ESPN.com tweets the Pats will receive the ’19 Round 2 choice and a Chicago fourth-rounder (No. 105) in this year’s draft.

New England has now traded down twice in the second round, sending both picks to NFC North teams. The Lions moved up to select Kerryon Johnson earlier in this second round.

LSU running back Derrius Guice has changed representation, going from the firm that represents rap star Kendrick Lamar to one headed up by Lil Wayne, as Darren Heitner of Forbes Magazine writes. Guice is the latest draft prospect to join Young Money APAA Sports, which also represents Texas linebacker Malik Jefferson. Thanks to a buyout of another firm late last year, the agency also has NFL players Devin McCourty, Duron Harmon, Lane Johnson, Jason McCourty and Seth Roberts in its stable.