Defensive tackle A’Shawn Robinson could finally make his debut for the Rams this weekend. The team announced that they’ve activated the veteran to the 53-man roster.

Robinson joined the Rams this past offseason on a two-year, $17MM deal. As Mark Inabinett of AL.com explains, the 25-year-old had previously dealt with a “respiratory situation,” qualifying him as a medical opt-out amid the COVID-19 pandemic. Under that plan, Robinson could have earned $350K for the 2020 season and had his contract officially set to begin in 2021.

Instead, Robinson and the Rams agreed to a reworked deal that saw Robinson start the season on the reserve/NFI list. While the start of his two-year deal was still delayed until the 2021 campaign, Robinson will instead play the 2020 season under a deal that’s based on bonuses.

While the Rams defensive line grouping is set with Michael Brockers, Aaron Donald and Sebastian Joseph as starters, Robinson will provide the team with another depth piece (alongside Morgan Fox and Greg Gaines). Coach Sean McVay told reporters that if Robinson doesn’t play this weekend against the Dolphins, he’ll definitely return following the team’s Week 9 bye.

The 2016 second-rounder had spent the first four seasons of his career with the Lions. After starting all 16 games during the 2017 season, Robinson was limited to only 26 games (16 starts) between the 2018 and 2019 campaigns. Still, he combined for 89 tackles, 2.5 sacks, and two forced fumbles.

After losing several key defensive players, the Rams are now adding to their core. NFL.com’s Tom Pelissero reports (via Twitter) that the team is signing defensive tackle A’Shawn Robinson. It’s a two-year deal worth $17MM.

The 2016 second-rounder had spent his entire career with the Lions. After starting all 16 games during the 2017 season, Robinson was limited to only 26 games (16 starts) over the past two years. Still, he combined for 89 tackles, 2.5 sacks, and two forced fumbles.

The Rams defense will look a whole lot different in 2020. Safety Eric Weddle retired, Cory Littleton, Michael Brockers, and Dante Fowler have all departed in free agency, and the team declined their option on usual slot corner Nickell Robey-Coleman. So far, the organization has added former first-rounder Leonard Floyd and re-signed Austin Blythe.

They’ve also replaced defensive coordinator Wade Phillips with Brandon Staley, so it’s safe to say that side of the ball is getting a complete makeover after Sean McVay’s dissatisfaction with the previous structure became evident.

More than 100 of the 253 draftees from this year’s class have already signed their rookie contracts, and several more are making it official with their respective teams today. Here are the latest draft pick signings from around the NFL:

If Notre Dame linebacker Jaylon Smith gets good news on his medical re-check later this month, his chances of going in the first round of the draft will increase significantly, writes Charlie Campbell of WalterFootball.com. Campbell lists the Bengals, Chiefs, Packers, Texans and Vikings as potential landing spots for Smith, who is on the mend from a torn ACL and MCL that he suffered on New Year’s Day during the Fiesta Bowl. Prior to that catastrophic end to his college career, Smith was seen as a surefire first-rounder – and a high one at that – but his status has been in question since. February’s combine didn’t help matters for Smith, who reportedly failed multiple teams’ physicals.

More of the latest draft news:

Veteran outside linebacker James Harrison remains under contract with the Steelers for another season, and is due a $1.25MM base salary for 2016. However, it remains to be seen whether Harrison, who would be the NFL’s oldest defensive player, will return for one more year. Among those interested in Harrison’s decision on his future? His teammates in Pittsburgh.

Steelers guard Ramon Foster tweeted to Harrison today, asking whether he’s coming back for 2016, to which Harrison replied, “I can’t say for sure but it’s looking good for the home team!” Agent Bill Parise tells Ed Bouchette of the Pittsburgh Post-Gazette (Twitter link) that his client has yet to make a final decision, suggesting that may not happen until camp, but it sounds like Harrison may not be ready for retirement quite yet.

Here are a few more items from out of the AFC North:

While the Buccaneers have floated the idea of acquiring a first-round pick for quarterback Mike Glennon, Matt Miller of Bleacher Report hears the Tampa Bay would accept a third-rounder if it were from a team picking relatively high. That conflicts with a recent report by Jason La Canfora of CBSSports.com which said the Bucs turned down a second-round pick for its backup quarterback. Of course, La Canfora’s report didn’t given any sense of a timetable, so Tampa’s view of Glennon’s market could have changed since it rejected a second-rounder. Glennon is generating the most trade interest of any signal-caller outside of Colin Kaepernick, per Miller.

Here’s more from Miller’s latest column, with a heavy focus on the NFL draft… 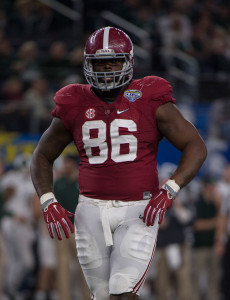 Robinson, who likely projects as a defensive tackle for a team running a 4-3 scheme or a defensive end for a 3-4 defense, is considered one of the top defensive linemen available this spring. A Consensus All-American in his junior year, Robinson recorded 46 tackles (7.5 for a loss) to go along with his 3.5 sacks.

Recently, ESPN’s Todd McShay (Insider link) projected Robinson to go 19th overall in this year’s draft. McShay’s ESPN colleague, Mel Kiper Jr., was even more bullish on the defensive lineman’s prospects, suggesting in his first mock draft of 2016 that Robinson will come off the board at No. 12 overall, to the Saints (Insider link).

Kiper suggests the 6’3″, 313-pound lineman is “an immediate starter who combines great awareness and strength to make plays and hold the point in the run game, as well as the ability to push the pocket.”

Alabama running back and Heisman Trophy winner Derrick Henry has decided to enter the 2016 NFL draft, according to Joe Schad of ESPN.com. By entering this year’s draft, Henry will forgo his final year of college eligibility. 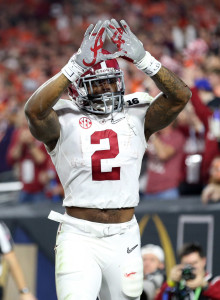 Henry, a Consensus All-American, led the nation with 395 carries for 2,219 yards and 28 touchdowns in his junior year at Alabama. He capped his incredible year by rushing for 158 yards and three touchdowns on 36 carries in the Crimson Tide’s championship win earlier this week.

Henry’s staggering workload may be of some concern to teams, since only six running backs in NFL history have ever racked up 395 or more rushing attempts in a regular season. Still, he is viewed as one of the top backs in this year’s draft class, trailing only Ezekiel Elliott in the estimation of CBSSports.com and ESPN’s Todd McShay. Matt Miller of Bleacher Report currently places Henry fourth among running backs on his big board.

While Henry doesn’t currently project as a first-round pick, he looks like a good bet to come off the board on day two of this year’s draft. He could also be joined by several of his Alabama teammates in the 2016 draft class. Schad reports that defensive tackle A’Shawn Robinson has seriously considered entering the draft, while defensive end Jonathan Allen and tight end O.J. Howard have also weighed the possibility.

The deadline for NCAA underclassmen to declare their intent is next Monday.