The Jets are moving on from Blake Countess. New York has released the reserve safety, they announced in a press release Wednesday afternoon. 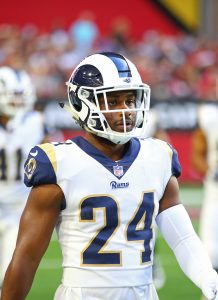 Originally drafted by the Eagles in the sixth-round back in 2016, he was waived at final cuts during his rookie season. He latched on with the Rams, and was soon promoted to the active roster after initially signing with the practice squad. He slowly carved out a role for himself, and became an important player during the Rams’ breakout 2017 season. He played over 15 percent of the defensive snaps that year in a rotational role, notching 25 tackles and an interception.

He also was one of their most utilized players on special teams. In 2018 he appeared in all 16 games for the Rams, starting one, and again being a core special-teamer. Los Angeles tendered him a contract as a restricted free agent, but ended up releasing him later last offseason after he refused to take a pay cut from his projected $2MM salary. He caught on with the Jets in October, and appeared in six games for them. Only 26, the Auburn product should be able to latch on elsewhere and attempt to crack a different team’s 53.