Lions quarterback David Blough is expected to make his first career start tomorrow in place of Jeff Driskel, a source tells Jeremy Fowler of ESPN. Driskel is not expected to be able to play through a hamstring injury that’s been causing him problems.

Blough will be the third different player to start under center for the Lions. Driskel stepped in for franchise quarterback Matthew Stafford when he went down with an injury of his own. The Lions do not have another quarterback on their roster, which means tight end (and collegiate quarterback) Logan Thomas will serve as the team’s emergency backup.

An undrafted free agent out of Purdue, Blough, originally signed with the Browns. However, as roster cuts approached, the Lions agreed to swap conditional draft picks in exchange for the rookie signalcaller. Unlike Driskel, Blough is not a mobile quarterback (he ran a 4.9 40-yard dash during the draft process), and will have to rely on his skills as a pocket passer to take down the Bears.

In his first career start, Blough will be going up against one of the better defenses in football (Bears) on one of the biggest stages of the year (Thanksgiving). The pressure and bright lights will be on and he will get a chance to make an impression.

The Lions are stockpiling quarterbacks. Detroit is trading for David Blough, acquiring him from the Browns, per Adam Schefter of ESPN.com (Twitter link). 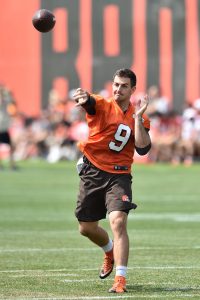 In perhaps the most minor trade on a day full of minor trades, the two teams will swap seventh-round picks in 2022, Schefter notes. Blough is an undrafted rookie from Purdue who had been operating as Cleveland’s fourth-string quarterback in camp. The Lions are in the process of trimming their roster so this will likely change shortly, but as of right now they have five passers on their roster.

Behind starter Matthew Stafford, they currently have Tom Savage, Josh Johnson, and former AAF signal-caller Luis Perez. Perez was just signed a couple of days ago. Savage started the offseason as Stafford’s backup, and the team signed the legendary journeyman Johnson after Savage sustained a concussion in the preseason. Blough was a starter for most of the past four years at Purdue, earning a third-team All-Big Ten selection last year.

The Browns are the latest team to formally announce their undrafted free agent class. Overall, Cleveland inked 15 additional rookies to supplement their draft class, which did not include a first round pick.

Many analysts thought that Ray would get drafted, so he might have one of the best chances of making the team. He was productive for Boston College last season in his first year as a starter, notching 11.5 tackles for loss and nine sacks. Gillian is another interesting player in this class. Nicknamed the ‘Scottish Hammer’, he’s extremely versatile and handled both punting and kicking duties in college.

The Browns did just draft kicker Austin Seibert in the fifth round and most people project Gillian as more of a punter in the pro game. He should have the chance to battle it out with Britton Colquitt in camp. Baker didn’t see too much action because of Kentucky’s run-first offense, but he’s a big receiver who’s very strong, and he could be a decent flyer.