The Buccaneers have signed LS Garrison Sanborn to a one-year contract, per Greg Auman of The Athletic. Sanborn served as Tampa Bay’s long snapper last season after an eight-year run with the Bills. Since signing with Buffalo as an undrafted free agent in 2009, Sanborn has not missed a single game. 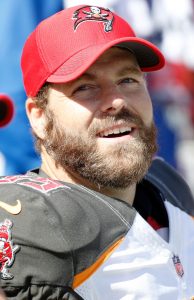 Despite Sanborn’s experience, the Bucs appeared content to go into the 2018 campaign with Drew Ferris — who has no regular season NFL experience — at long snapper. However, Ferris had a bad snap in the team’s Friday night preseason loss to Detroit, which led to a missed extra point. That was apparently all the Bucs needed to see to bring back Sanborn and to create a roster battle.

Tampa Bay head coach Dirk Koetter suggested as much yesterday when discussing Ferris’ error. Koetter said, “It was a low snap, and (holder) Bryan Anger was trying to get it down and it was just bang-bang. When (kicker) Chandler (Catanzaro) was there to kick it, the ball wasn’t quite down, so he hit it kind of funny. Of course, any time you’re having that, that’s a concern and that’s something we’re going to have to address.”

Presumably, both Sanborn and Ferris will get an opportunity to prove their worth during Tampa Bay’s preseason finale on Thursday. The Bucs had three openings on their roster, so they do not need to make a corresponding move.

Sanborn is a Tampa native and played his collegiate ball at Florida State.

Free agent signee C.J. Anderson will likely be the Panthers‘ lead “traditional back,” according to Jourdan Rodrigue of the Charlotte Observer. Anderson, who inked a one-year deal worth $1.75MM, is coming off a 1,000-yard season with the Broncos, but he struggled as an early-down rusher in 2017. Still, that’s the role he’ll take on in Carolina as 2017 first-round pick Christian McCaffrey performs in a passing game role. McCaffrey should keep up his receiving work after managing 80 receptions during his rookie campaign, but Rodrigue reports McCaffrey was never able to “find a rhythm” in the running game. Whether that can change during the upcoming season is unclear, but McCaffrey will now have limited reps thanks to Anderson’s presence.