The Eagles have signed kicker Jake Elliott to a 5-year, $21MM extension, which includes $10.5MM guaranteed, according to NFL Insider Adam Caplan. Ian Rapoport of NFL.com reported soon after the contract actually includes $10.45MM guaranteed with a maximum total value of $21.8MM. The disparities are marginal, but could have minor salary cap implications for Philadelphia.

Elliott, signed off the Bengals practice squad in 2017, has been one of the most consistent kickers in football 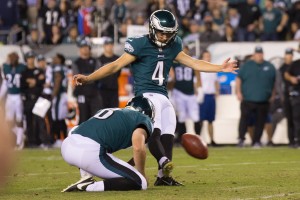 The Memphis alum has shown elite range, making a 61 yard attempt as a rookie, but after going 5 for 6 from beyond 50 yards in his first season, went just 2 for 5 last season. This year, Elliott has made his only attempt from beyond 50 yards, but more importantly, he has been reliable from inside 50 yards out. Over the past two seasons, Elliott has missed just two field goals of 49 yards or less.

Elliott becomes the third highest paid kicker by average annual salary and provides the Eagles with cost certainty at the most important special teams position.

The Eagles picked up kicker Jake Elliott from the Bengals’ practice squad to replace the incumbent Caleb Sturgis after he suffered a hip injury the first week of the season. The team hasn’t looked back since then and it looks like Philadelphia has no plans to change their special teams unit moving forward. While Sturgis is eligible to come off the disabled list this week, Eagles special teams coach Dave Flipp told reporters today that, “right now there’s no reason to make a change,” reports Zach Berman of The Inquirer. It’s understandable why the team would not feel the need to mess with the status quo. Elliott has made 17-20 of his field goal attempts this season, but is best known for his 61 yard bomb he hit to beat the Giants in Week 3.

Caleb Sturgis‘ injury looks to have prompted the Eagles to pry a kicker off another team’s practice squad, and they’ll be adding one of this past draft’s top kicking prospects.

The Eagles intend to sign rookie Jake Elliott off the Bengals’ taxi squad, Ian Rapoport of NFL.com tweets. Sturgis’ quad strain will send him to IR, with a potential designation to return, per Rapoport.

The Bengals opted to go with Randy Bullock as their primary kicker but attempted to stash Elliott, a fifth-round pick out of Memphis, on their practice squad. But the Eagles’ injury need will relocate the kicking prospect. Three kickers went in this past draft, and the other two — Zane Gonzalez and Harrison Butker — were seventh-round selections.

So, Philly will have an interesting specialist filling in for Sturgis — also a former fifth-round pick — who has kicked with the team for the past two seasons.

Elliott broke Stephen Gostkowski‘s Memphis records for points scored and field goals made in a career and was a Lou Groza award finalist in 2015.

The Eagles are on the lookout for a kicker. Caleb Sturgis suffered a hip flexor strain on Sunday, as Jeff McLane of The Philadelphia Inquirer tweets. The injury will rule him out for four weeks, ESPN’s Adam Schefter tweets, and the team is already making plans to look at replacements. 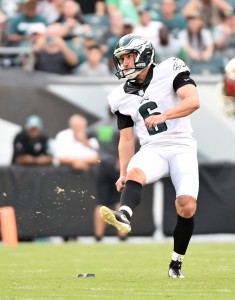 We don’t know who will be working out for the Eagles just yet, but Mike Garafolo of NFL.com (on Twitter) suggests that free agent Mike Nugent could get a look. Bengals practice squad kicker Jake Elliott could also get a call, Ian Rapoport of NFL.com tweets.

Sturgis, 28, made all three of his field goal tries on Sunday, including a 50-yard attempt, but missed one of his two extra point tries. Last year, he sank a career-high 85.4% of his field goals and went 30-for-31 on XPs.