The Falcons made a couple of roster moves on Black Friday. The team announced they’ve waived punter Ryan Allen and linebacker Jermaine Grace. They’re activating punter Matt Bosher off injured reserve, who had been designated as one of their return players. 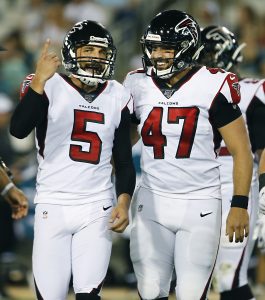 Bosher was the punter to start the season, but went down with a groin injury after just a few games. Bosher has been Atlanta’s punter since 2011, so it’s not surprising that the former sixth-round pick had his job waiting for him when he got healthy. The Falcons have used four different punters this season, and hopefully the cycling through can stop now. Allen had been the Patriots’ punter for six seasons up until he was cut this past August in favor of rookie Jake Bailey.

Allen latched on with Atlanta just a few weeks ago, after Matt Wile and Kasey Redfern had previously filled in. Grace entered the league as an UDFA back in 2017, and has already spent time with four different teams. Grace had played only a handful of defensive snaps, but had been a key special teamer all year, playing almost 70 percent of special teams snaps. Grace missed the block on Taysom Hill‘s punt block during last night’s loss to the Saints, which apparently sealed his fate.

The Seahawks carried J.D. McKissic through to their 53-man roster, but he will not be available for at least eight weeks now.

McKissic will head to IR, Field Yates of ESPN.com reports (on Twitter). Former Browns linebacker Jermaine Grace, whom the Seahawks claimed off waivers, will take McKissic’s roster spot, per Yates.

A third-year running back, McKissic is dealing with a Jones fracture in his foot. He was not slated to be ready for Week 1 and will now have plenty of time to heal up. It’s not certain Seattle will bring him off IR when he’s healthy, however. The Seahawks only have two IR-return slots, and whether McKissic is brought back for second-half action this season will depend on how the team fares with injuries during the first half.

Seattle may also be without Rashaad Penny in Week 1. Chris Carson, C.J. Prosise and Mike Davis represent the Seahawks’ current healthy running backs. They carried five through to their 53-man unit, presumably knowing McKissic was IR-bound. Had the Seahawks placed their agile backup on IR before Saturday’s cutdown day, he would have had to miss the entire season.

The Browns waived Grace on Sunday to make room for one of the five new players they added via post-cutdown waivers. A 2017 UDFA who saw scant action as a rookie with the Falcons and Colts last year, Grace will join a Seahawks linebacking corps that will likely be without K.J. Wright in Week 1.