Kolby Listenbee is looking for a job. ESPN’s Field Yates reports (via Twitter) that the Colts have waived wideout Kolby Listenbee from the IR. The receiver will become a free agent if he goes unclaimed. 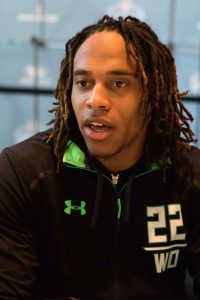 The TCU product was originally projected to be a third- or fourth-round pick in the 2016 draft, but he ended up falling to the Bills in the sixth round. Listenbee was unable to stay healthy during his lone season in Buffalo, and he was released by the team last offseason. He eventually caught on with the Dolphins practice squad before signing with the Colts. He inked a futures deal with Indy back in January, and he was waived/injured last month before ultimately landing on the injured reserve.

With Listenbee out of the picture, that means there’s one less receiver competing for one of the final roster spots. Kasen Williams, Deon Cain, Krishawn Hogan, and Seantavius Jones are currently listed at the bottom of the team’s depth chart.