Todd Bowles was admitted to a hospital earlier today and did not travel with the Jets to Foxboro for the Week 16 Patriots tilt. He’s questionable to coach in this game, and Adam Schefter of ESPN.com reveals why (Facebook link).

Jets officials initially feared the 53-year-old head coach had a heart attack on Friday. The coach was throwing up, complained of chest and back pains and was unable to keep medication down. This caused team officials to become “extremely concerned,” leading to the hospital trip.

Doctors, however, determined Bowles did not have a heart attack but do want to visit with him after the season to see if any action needs to be taken, Schefter reports.

The team announced he’s in stable condition, and Ian Rapoport of NFL.com tweets the plan is for Bowles to spend tonight in the hospital. The Jets and Patriots are set for a 1 p.m. kickoff Saturday. Bowles still hopes to coach the Jets in that game, Schefter reports, but the longtime reporter calls it a doctor’s decision whether or not he can travel to New England. Assistant head coach Mike Caldwell would take over in the event Bowles cannot coach.

The second-year Jets leader is normally the first coach in the building, per Josina Anderson of ESPN.com (on Twitter), arriving by around 4 a.m. Anderson adds the energy Bowles usually exhibits was absent today. GM Mike Maccagnan visited Bowles in the hospital before the team left, Anderson reports (via Twitter). The Jets also conducted a staff meeting, which deviates from their normal road schedule outside of position meetings, Anderson tweets.

New York is 4-10 this season after finishing Bowles’ debut campaign at 10-6. Bowles is the fourth head coach to be hospitalized this season, following Gary Kubiak, Bruce Arians and Mike Zimmer.

The 45-year-old Caldwell followed Bowles from Arizona, where the former NFL linebacker was the Cardinals’ LBs coach, before becoming an assistant head coach with the Jets.

With the Seahawks pulling out an impressive win today, their defensive coordinator Dan Quinn will have to wait until after the Super Bowl to sign on as the head coach of an NFL team. Our own Dallas Robinson told us that the Falcons are planning on hiring him whenever his season with the Seahawks is over, but will now have to wait until the first week of February to make it official. The team would not be able to sign or announce him as the new coach until after that time, according to Vaughn McClure of ESPN.com (via Twitter).

Quinn is set to have his second interview with the Falcons tomorrow in Seattle, reports Ian Rapoport of NFL.com (via Twitter).

Here are some other NFL coaching notes from around the league:

After promoting one coach earlier today, it sounds like the 49ers will be parting ways with the rest of their coaching staff. Fox Sports’ Alex Marvez reports (via Twitter) that the organization plans on dismissing all assistants except running backs coach Tom Rathman. A member of that coaching staff told CSN Bay Area’s Matt Maiocco that they are “in the dark” regarding the team’s plans (Twitter link). Its unclear if any of the remaining coordinators, including defensive coordinator Vic Fangio, are safe.

Meanwhile, Matt Barrows of the Sacramento Bee tweets that “several” 49ers assistants will likely join former offensive coordinator Greg Roman with the Bills, while others will likely follow Fangio.

WEDNESDAY, 5:05pm: The Jets (on Twitter) have made it official: Bowles is their new head coach.

TUESDAY, 10:36pm: Dolphins defensive line coach Kacy Rodgers is very likely to be Bowles’ defensive coordinator, according to Jason La Canfora of CBSSports.com (on Twitter). It’s possible that Caldwell will also join the staff, but maybe in a different role.

10:20pm: Bowles’ choice for defensive coordinator might be linebackers coach Mike Caldwell, according to Ian Rapoport of NFL.com (on Twitter).

10:09pm: It’s a four-year deal worth at least $16MM, according to Rich Cimini of ESPNNewYork.com (on Twitter). Gailey, he hears, will be hired as Bowles’ offensive coordinator.

9:23pm: The Jets have reached agreement with Todd Bowles to become their next head coach, according to Adam Schefter of ESPN.com (on Twitter). It’s a four-year deal, Schefter adds (link). 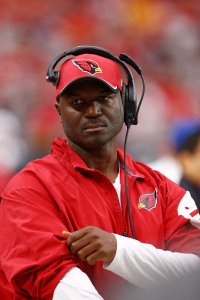 Gang Green’s contingent of new GM Mike Maccagnan, owner Woody Johnson, and team consultants Charley Casserly and Ron Wolf met with Bowles earlier tonight in the New York area. The Cardinals defensive coordinator was slated to visit with the Falcons on Wednesday, but those plans have ostensibly been 86’d. The Jets were likely concerned about Atlanta beating them too the punch and made their offer quickly.

The new position marks a homecoming in more than one way for Bowles. The 51-year-old is a native of Elizabeth, New Jersey, a short drive from the Jets’ Meadowlands home. Bowles also has previous experience with the Jets, having served as their defensive backs coach in the 2000 season. The defensive-minded coach is a disciple of the legendary Bill Parcells, who served as the Jets’ coach from 1997-1999 as as their GM in 2000.

The Jets were impressed with, among other things, the staff ideas Bowles had, according to Albert Breer of the NFL Network (on Twitter). Former Bills coach Chan Gailey, who has been out of the game for some time, is a strong possibility to be the team’s next offensive coordinator.

Casserly’s fingerprints appear to be all over the Jets’ new hires. Maccagnan worked under Casserly as a scout while Bowles is one of his former players. The Jets coveted Seahawks defensive coordinator Dan Quinn, but the uncertainty over whether they could land him combined with Bowles’ strong interviews led them to this hire, according to Manish Mehta of the New York Daily News (via Twitter). Quinn can’t accept a job elsewhere until the conclusion of the Seahawks’ season, which might not be until February.

Wins over Alabama and Oregon in the NCAA’s first College Football Playoff created plenty of buzz for Urban Meyer, but the Buckeyes head coach quickly dismissed any speculation that his success at Ohio State would result in a jump to the NFL this offseason. “Not right now. I have a commitment to Ohio State and these players,” Meyer said when asked about the possibility of an NFL job, per Michael David Smith of Pro Football Talk.

Let’s check in on several coaching situations from around the league, as a handful of teams look to hire new head coaches and/or coordinators….