Raekwon McMillan won’t see the field this season, but the Patriots linebacker still got a deal for next year. New England has signed McMillan to a one-year extension, keeping the player with the team through at least the 2022 campaign, per ESPN’s Field Yates (via Twitter). 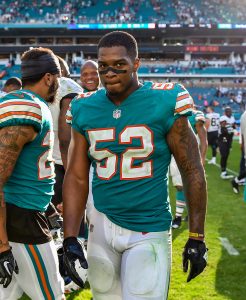 McMillan joined the Patriots this offseason, and it sounded like he was going to carve out a role on the team’s defense (per ESPN’s Mike Reiss on Twitter). However, he suffered a torn ACL during training camp that knocked him out of action for the entire 2021 season. The 25-year-old will still have a year to pick up the team’s playbook, and he’ll be able to compete for a spot on next year’s roster.

McMillan was a second-round pick back in 2017, but his rookie season was wiped out thanks to a torn ACL. He was relatively productive in two healthy seasons with the Dolphins, collecting 177 tackles, eight tackles for loss, and two forced fumbles.

He was traded to the Raiders prior to the 2020 season, and he finished his lone season in Vegas with 27 tackles and one forced fumble in 16 games (four starts).

Patriots linebacker Raekwon McMillan tore his ACL while practicing earlier this week (Twitter link via NFL.com’s Ian Rapoport). That marks the second ACL tear of McMillan’s career and the end of his 2021 season. is the second torn ACL for the former #Dolphins 2nd round pick, but this time on the other knee. 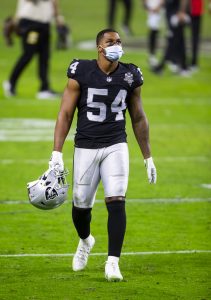 This time around, it’s McMillan’s other knee. It’s another frustrating setback for the former Dolphins second-round pick who was once ticketed for a sizable role in Miami’s front seven.

McMillan spent the early part of his career with the Dolphins before being shipped to the Raiders in August of 2020. He came off the bench in most games, finishing the year with 27 stops and one forced fumble.

Before that, he flashed at times in South Beach and even ranked as the Dolphins’ best defensive player in 2019, per to Pro Football Focus. The Dolphins considered a long-term extension for him at one point but, ultimately, they were unwilling to commit, especially at the height of the pandemic.

Despite his ups, downs, and suspect pass coverage, the Patriots were excited to add him on a one-year deal earlier this year. Unfortunately, he won’t be able to join fellow newcomer Matt Judon in the LB group – at least, not until 2022.

McMillan spent the early part of his career with the Dolphins before being shipped to the Raiders last August. He came off the bench in most games, finishing the year with 27 stops and one forced fumble.

The hard-hitting linebacker came into the league as a second-round pick in 2017. He flashed at times and even ranked as Miami’s best defensive player in 2019, according to Pro Football Focus. The Dolphins considered a long-term extension for him at one point but, ultimately, they were unwilling to commit. The timing wasn’t great either — talks petered out amidst the pandemic.

McMillan’s pass coverage is suspect, but he’s a solid run-blocker who should see time in the Patriots’ rotation. He’ll be joined by fellow new arrival Matt Judon in that group, along with scores of other fresh faces in the locker room.

The Dolphins have agreed to trade linebacker Raekwon McMillan to the Raiders, according to a source who spoke with Barry Jackson of the Miami Herald (on Twitter). In exchange, the Raiders are sending a 2021 fourth-round pick to Miami, but they’ll also receive a 2021 fifth-round pick along with McMillan (Twitter link via ESPN.com’s Adam Schefter). 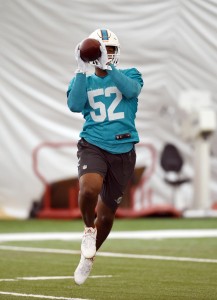 In 2019, McMillan ranked as the Dolphins’ best defensive player, according to Pro Football Focus. Earlier this year, the Dolphins were said to be considering an extension for McMillan, but the pandemic threw a wrench into those talks. The Dolphins also had their doubts about McMillan’s pass coverage, and they were planning to mostly use him on run downs this year. DeVante Parker, Jesse Davis, Allen Hurns, and Jakeem Grant all received extensions recently, but the Dolphins ultimately did not want to lock down the young ‘backer.

McMillan, who has one year and $1.1MM left on his deal, will now try to make his case in Las Vegas. There, he’ll support a revamped linebacker group that previously had depth concerns, despite the additions of Cory Littleton and Nick Kwiatkoski.

McMillan wasn’t the right fit for Brian Flores‘ 3-4 hybrid scheme, but he could fare better with Jon Gruden. He comes to the Raiders with ample experience, having started 28 of his 29 games since entering the league as a second-round pick in 2017.

The Dolphins haven’t ruled out an extension for Raekwon McMillan, Barry Jackson of the Miami Herald hears. It’s likely that the linebacker’s negotiations – like many around the NFL – have been held up due to the pandemic and uncertainty about the 2021 salary cap. However, the Jackson hears that the Dolphins appreciate what McMillan brings to the table and they’d be interested in continuing his stay.

In 2019, McMillan ranked as the Dolphins’ best defensive player, according to Pro Football Focus. The Dolphins have already extended players like DeVante Parker, Jesse Davis, Allen Hurns, and Jakeem Grant, so it stands to reason that they would want to lock down McMillan.

On the flipside, McMillan isn’t great in pass coverage. The Dolphins recognize his limitations, which is why he’s expected to be used mostly on run downs this year. That’s not exactly a great platform for a free agent linebacker, so McMillan would probably like to secure the bag before the season starts.

Jackson hears that the Dolphins are in a similar place with defensive tackle Davon Godchaux, who has one year remaining on his original rookie deal. Last year, the former fifth-round pick made more stops within 2 yards of the line than any other defensive tackle in the NFL. This year, he’s set to earn $2.1MM before reaching the open market.

In both cases, the potential cap decrease is a major factor. Before the pandemic, the Dolphins expected to have ~$60MM in cap room for 2021. Now, that space could be completely wiped out.

The Dolphins might be receiving some interest in Josh Rosen, but they’re probably not in a rush to trade him, Armando Salguero of the Miami Herald writes. Rosen is slated to count for just $2.17MM against the cap and GM Chris Grier would be admitting defeat by trading the former first-round pick for substantially less than he gave up for him. In 2019, the Dolphins shipped a second-round pick plus a fifth-round choice to the Cardinals for Rosen. Right now, there’s no way they’d get anything close to a Round 2 selection in return.

Instead, Salguero expects the Dolphins to wait things out and see if his value improves with time. A QB injury elsewhere coupled with a solid preseason from the former No. 10 overall pick could get the job done. In the meantime, the Dolphins will focus on Tua Tagovailoa – their latest quarterback of the future – and proven veteran Ryan Fitzpatrick.

In the midst of a rebuild, the Dolphins are shopping some of their older players. Barry Jackson and Adam Beasley of the Miami Herald report that Miami has dangled several of their veterans in trade talks. 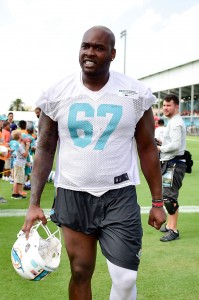 However, one of the players who hasn’t been shopped is offensive tackle Laremy Tunsil. Earlier today, Tony Pauline of Pro Football Network reported (via Twitter) that the Dolphins were shopping the 25-year-old, but Jackson and Beasley write that the organization has “assured the Tunsil camp that there is no truth to that.”

Jackson and Beasley note that the front office has received calls about Tunsil, but the team hasn’t acted on any of the inquiries. Further, the reporters write that they personally received a call from a credible source who said “Tunsil’s name had come up in trade discussions,” but it was uncertain whether the Dolphins initiated the calls.

It wouldn’t make a whole lot of sense for the Dolphins to move on from Tunsil. The former first-rounder has established himself as an up-and-coming lineman, and he’s under team control for another two seasons. Plus, the team is looking to build their offensive line as they prepare for the future with either Josh Rosen or a 2020 rookie under center. Moving on from one of their assets would contradict that logic.

While Tunsil might not be on the block, the Dolphins have been shopping safety Reshad Jones and linebacker Kiko Alonso. Jackson and Beasley write that rival organizations are expecting Alonso and wideout Kenny Stills to be cut, limiting Miami’s trade flexibility. The Dolphins would also consider offers for linebacker Raekwon McMillan, who could be pushed for playing time by Sam Eguavoen.

The organization kicked off their rebuild this past offseason by moving on from a number of veteran players, including quarterback Ryan Tannehill and linebacker Cameron Wake. The team currently owns 13 draft picks in the 2020 draft.