The Chiefs outlasted the Panthers in a thrilling shootout, but they’ll be without a part of their pass-rush moving forward. Defensive end Taco Charlton suffered a fracture in his lower leg and will head to injured reserve, head coach Andy Reid announced after the game. 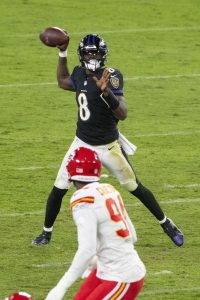 It’s unclear the severity, but it’s certainly possible that he’s done for the year. With the new IR rules, he’ll be out at least three games. He’d been playing a decent-sized role as a rotational pass-rusher, notching around a quarter of the defensive snaps in the six games he played prior to getting hurt. He had been reasonably productive in those six games, racking up two sacks, four quarterback hits, and a forced fumble.

Charlton’s NFL career started out as a highly-touted first-round pick of the Cowboys, but he quickly flamed out in Dallas. He was cut after only two-plus years with the Cowboys, then scooped up by the Dolphins. He had his best season as a pro last year with Miami, notching five sacks in only ten games.

Taco Charlton has found a new home. The defensive lineman is signing a one-year deal with the Chiefs, reports Terez A. Paylor of Yahoo (via Twitter).

Charlton’s brief stint with Miami came to an end earlier this week, as the Dolphins waived the 25-year-old. Of course, that’s not to say that the lineman’s lone season in Miami wasn’t a success; despite appearing in only 10 games (five starts), Charlton still managed to compile a career-high five sacks and two forced fumbles.

The 2017 first-round pick out of Michigan spent the first two-plus seasons of his career with the Cowboys. He wasn’t particularly productive when he saw the field, as he combined for only 46 tackles and four sacks between the 2017 and 2018 seasons (27 games). He missed five games during the 2018 campaign thanks to a shoulder injury, and he later underwent ankle surgery. Those ailments lingered into the early parts of the 2019 season, and the Cowboys cut the lineman in mid-September.

In Kansas City, Charlton will have another shot to rehabilitate his image. Of course, that might be easier said than done, as he’ll be inserted into a depth chart that already includes the likes of Alex Okafor, Derrick Nnadi, Mike Pennel, and Breeland Speaks.

The Dolphins will move on from one of its first-round defensive linemen. They waived Taco Charlton on Thursday. Miami initially claimed Charlton off waivers from Dallas last season.

Charlton did not live up to expectations with the Cowboys, who used a first-round pick on him in 2017, but did lead the 2019 Dolphins in sacks with five despite playing in only 10 games with Miami. No other Dolphin totaled more than 3.5 last season.

Miami signed multiple defensive ends this offseason — Shaq Lawson and Emmanuel Ogbah — and added hybrid player Kyle Van Noy but did not make a substantial investment in the position during the draft. The Dolphins used a fifth-round pick on defensive end Jason Strowbridge.

Given Charlton’s draft pedigree and production in limited Dolphins time last season, he will be a tempting waiver claim — especially when teams can carry 90 players on their respective rosters. Charlton, though, recorded just four sacks in two seasons with the Cowboys. Dallas waived him in September of last year.

The Dolphins have claimed Taco Charlton off of waivers, Ian Rapoport of NFL.com relays (Twitter link).

Charlton will be eligible to play for the Dolphins against the Cowboys on Sunday. Dallas released their former first-round pick earlier this week.

Charlton has been ineffective during his time in Dallas, though injuries have robbed him of a chance to get better. Dallas gets Robert Quinn, who played last season with the Dolphins, back from suspension this week, so the team had little room for Charlton in the defensive line rotation. He finished his Cowboys career with four sacks in 27 games.

Per ESPN’s Field Yates, the Dolphins were the only team to put a claim in on Charlton (Twitter link). Other clubs were deterred by the $3MM Charlton is owed over the next two seasons and his relative lack of production to date, but Miami, flush with cap space and in the midst of a rebuild, was willing to absorb the cost of this particular lottery ticket.

Taco Charlton, who the Cowboys selected in the first round of the 2017 draft, has been released, Ian Rapoport of NFL.com reports and the Cowboys confirm. It was reported earlier today that the Cowboys would shop the defensive end or cut him if they couldn’t find a suitor on the trade market.

Robert Quinn, who the Cowboys acquired in the offseason, is set to return from a two-game suspension and with Quinn in the defensive line rotation, playing time for Charlton would have likely been minimized.

Charlton has been ineffective during his time in Dallas, though injuries have robbed him of a chance to get better. He finishes his Cowboys career with four sacks in 27 games.

One way or another, Taco Charlton won’t be with the Cowboys much longer. The Cowboys continue to seek a trade for the former first-round pass-rusher, but if they can’t find a suitable deal, they’ll release him, Ian Rapoport and Jane Slater of NFL.com (on Twitter) hear. 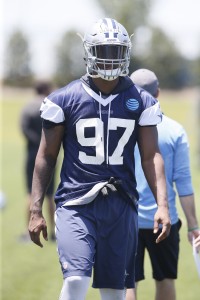 With Robert Quinn set to return from his two-game ban, there’s little room for Charlton, who has not lived up to expectations so far. The 2017 first-round pick has lacked explosiveness at the pro level and a string of injuries prevented him from taking a step forward this offseason. This year alone, Charlton has already undergone two surgeries.

Given his potential, it seems likely that Charlton will hook on elsewhere if the Cowboys cut him. The 24-year-old (25 in November) will look to improve upon an iffy 2017 season in which he struggled, despite three sacks as a part timer.