Terry Poole‘s stay in Houston was short lived. After being claimed off waivers over the weekend, the offensive tackle has been released with a failed physical designation, the team announced. 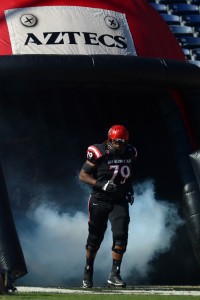 Poole was initially a Seahawks fourth-round pick in the 2015 draft, but he has yet to play in an NFL game. This year, he signed a futures deal with Miami, but the Dolphins cut him loose in August. Now, he’ll have to look for his fourth NFL team with the hope that the new squad will give him his first taste of live action.

Poole was not necessarily central to the Texans’ plans for this season, but tackle depth is critical as Duane Brown pushes for a new contract. The Texans are also without Derek Newton for the season as he recovers from double patella tears.

The Seahawks have placed linebacker Mike Morgan on injured reserve with a sports hernia, according to Bob Condotta of the Seattle Times (Twitter link). Head coach Pete Carroll said Morgan will have surgery and will miss four-to-six weeks, so it’s possible that he could return off IR later in the year (link). To fill Seattle’s empty roster spot, the club will promote linebacker Jordan Tripp from the practice squad (link).

Morgan, 28, is a starting linebacker in the Seahawks’ 4-3 scheme, but given that the club is the nickel the majority of the time, Morgan has only played on roughly a third of Seattle’s defensive snaps this season. A six-year NFL veteran, Morgan has spent his entire career with the Hawks and has appeared in 71 games, but he’s only started four contests. According to Carroll (link), backups Cassius Marsh and Kevin Pierre-Louis will fill in during Morgan’s absence.

In other Seahawks news, reserve defensive end Quinton Jefferson had hand surgery and will be out a few weeks (Twitter link via Condotta), while the club has waived offensive tackle Terry Poole off IR, per Condotta.

The Seahawks haven’t officially released their moves today, but as Curtis Crabtree of KJR noted (Twitter link), the club has listed their transactions on their official team depth chart.

The Seahawks also announced that they’ve acquired defensive back Dewey McDonald (for a conditional 2017 pick, per Adam Schefter of ESPN.com) from the Raiders, and, as we previously noted, acquired safety L.J. McCray from the 49ers.

Here are today’s minor NFL moves, with a focus on reserve/futures contracts: