Travin Howard will miss the 2020 season with a torn meniscus, as Jordan Rodrigue of The Athletic tweets. The Rams will make it official this week by placing the linebacker on injured reserve. 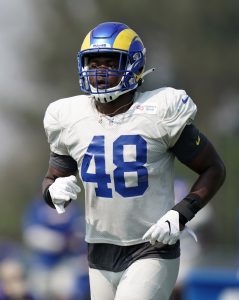 Howard, a 2018 seventh-round pick, spent the early part of his career as a practice squad and special teams player. In 2019, he made the most of his opportunity and closed strong with 13 tackles and three pass breakups over the final five weeks of the season. This summer, he was in the midst of an impressive camp and potentially in the conversation to start. Now, he’ll have to wait until 2021 to potentially take his next big leap forward.

Even before the injury, the Rams were concerned about their lack of depth at inside linebacker. Troy Reeder – who is hardly a household name – leads the team’s ILBs in career starts with eight. Former Raven Kenny Young stands as the only other ILB on the roster with starting experience.