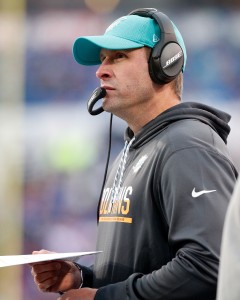 JANUARY 20: The Dolphins have made the hiring of Christensen official, tweets Aaron Wilson of the Houston Chronicle. They’ve also named Bo Hardegree their new quarterbacks coach, according to Adam H. Beasley of the Miami Herald (Twitter link). Hardegree worked with Gase as an offensive assistant in both Denver and Chicago.

JANUARY 16: The Dolphins will hire Colts quarterbacks coach Clyde Christensen as their new offensive coordinator, reports Adam Schefter of ESPN (Twitter link). Alex Marvez of FOX Sports reported just a few hours ago that Christensen was a candidate for the position. 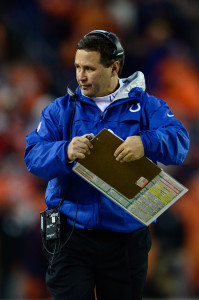 Christensen is the latest new face on first-time head coach Adam Gase‘s Miami staff, but his role probably won’t be as large as new defensive coordinator Vance Joseph‘s, for example. While Joseph will likely control all aspects of his defensive unit, Gase – a former offensive coordinator himself – will call the plays for the Dolphins, meaning Christensen will probably take on more of an administrative role.

Nevertheless, Christensen will certainly play a part in reshaping a Miami offense that finished just 22nd in the league in DVOA. As noted, the 59-year-old Christensen most recently acted as the Colts’ QBs coach, but he does have coordinator experience, acting in that capacity for Indianapolis from 2009-11 and with Tampa Bay in 2001. All told, Christensen’s coaching experience (pro and collegiate) dates back to 1979, but the last 14 years have been spent with the Colts.

Along with Christensen, former Chargers OC Frank Reich was also interviewed for the Dolphins vacancy. You can follow all the latest assistant coaching headlines by bookmarking our 2016 Offensive/Defensive Coordinator Tracker.

SATURDAY, 5:58pm: In addition to Loggains and Pires, the Bears have now hired Bo Hardegree to their coaching staff, reports Adam Jahns of the Chicago Sun-Times (via Twitter). Hardegree will join Gase and Loggains as an offensive assistant. He formerly coached with Fox on the Broncos staff in 2014 as a quality control coach.

FRIDAY, 9:09pm: John Fox promised he was giving his full energy to filling out his staff, and he seems to be coming through on his word.

The Bears have hired Dowell Loggains as their new quarterbacks coach and Glenn Pires as their new linebackers coach, reports Adam Jahns of the Chicago Sun-Times (via Twitter).

Pires was the linebackers coach with the Falcons for seven years before coming to the Bears.

Loggains and Pires join Adam Gase and Vic Fangio, who were hired as the offensive and defensive coordinators for the team earlier this week.