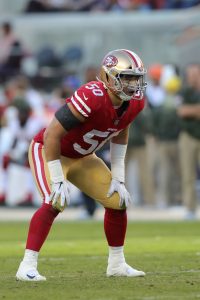 Coyle later announced his retirement from football due to the back injury that cut his season short in 2018 [Twitter link].

Injuries are a part of this game and it is a risk all players willingly take when we step onto the field. Unfortunately, the injury I sustained last season is one that will prevent me from returning to the field again.

Coyle, 28, joined the 49ers in 2017 on a one-year deal and impressed, starting 10 games and appearing in all contests while registering a career-high 62 tackles. He signed a three-year deal in the ensuing offseason but only played in one game in 2018 due to the injury.

Mayo, 25, was a fifth-round pick by the Panthers out of Texas State in 2015. He has appeared in all but one regular season game in the last three seasons with Carolina, making four starts and logging a combined 35 tackles. While he didn’t see a ton of action on the defensive side of the ball, Mayo is a strong contributor on special teams.

Lee, 23, was a seventh-round pick by the Vikings in 2017. The 49ers signed the Kansas State product off Minnesota’s practice squad that same season and he has appeared in 30 of a possible 32 games in his career. In 2018, the linebacker made five starts and logged 65 tackles with a sack and forced fumble.

The 49ers have re-signed linebacker Brock Coyle, according to a team announcement. Coyle underwent offseason shoulder surgery and, presumably, the operation was a success as he is being retained for three more years. The deal is worth$11.5MM with $4.1MM guaranteed, Adam Schefter of ESPN.com tweets.

It was expected that the Niners would re-up Coyle in the wake of Reuben Foster‘s domestic abuse arrest earlier this year. Coyle started ten games last season alongside Foster and while he doesn’t offer the same upside, he does have familiarity with the team.

Coyle, 28 in October, tallied 62 tackles with half a sack last year. He’ll reunite with old teammate Richard Sherman now that they’re both in San Francisco.

Yesterday, we learned that Seahawks QB Russell Wilson could be in line for a new contract with an AAV of $30MM as early as next offseason (he is under club control through 2019, and Seattle does not revisit deals that have more than one year remaining). While that report raised some eyebrows, Brady Henderson of ESPN.com (who penned the above-referenced article) tweets that Wilson’s current deal — which he signed in 2015 — has an AAV of 15.31% of the 2015 salary cap. A $30MM AAV on his next contract would represent 15.87% of the projected 2019 cap, so it would be a reasonable benchmark for Wilson to shoot for. Given that, and given Wilson’s accomplishments in the league, a $30MM/year deal does not seem especially far-fetched.

Now let’s take a look at a few more rumors from the NFC West:

ESPN’s NFL Nation identified each team’s biggest decision in free agency and Field Yates of ESPN.com (Insider subscription required) took a crack at determining what each team should do with their decision. Of note, Yates believes the Bills should pay what it takes to retain free-agent cornerback E.J. Gaines. The Bills acquired the 25-year-old defensive back from the Rams prior to last season as part of a package for wide receiver Sammy Watkins and Pro Football Focus ranked him as the league’s 13th-best cornerback last season. Gaines was one of several pieces the Bills added last year to improve their secondary, including first-round selection TreDavious White and signing Micah Hyde.

The 49ers have waived linebacker Ray-Ray Armstrong, head coach Kyle Shanahan told reporters, including Matt Maiocco of NBC Sports (Twitter link). The move was made to clear a roster spot for the return of Tank Carradine. 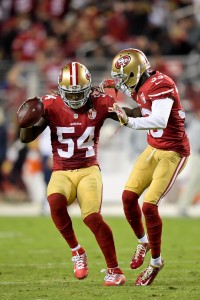 Armstrong, who received a two-year extension in December, had been relegated to primarily playing special teams after being supplanted in the starting lineup by Brock Coyle in early November. The team leader in snaps at linebacker with 532, Armstrong saw the field for just 14 snaps in Week 10 vs. the Giants.

With emergence of Coyle and first-round pick Reuben Foster in recent weeks, there just wasn’t any room in the linebacker corps on a Niners team looking toward the future. Armstrong ends his tenure with San Francisco with 53 tackles and one sack on the season.