11:10am: The Cardinals formally announced the signing of Jenkins. To make room, they have cut cornerback Carrington Byndom.

8:17am: The Cardinals have agreed to terms with free agent cornerback Mike Jenkins, according to Luke Easterling of USA Today (Twitter link). Financial terms of the deal aren’t yet known, but it’s likely a one-year pact with little or no guaranteed money. The deal is still pending the results of a physical, according to Mike Jurecki of FOX Sports 910 (on Twitter). 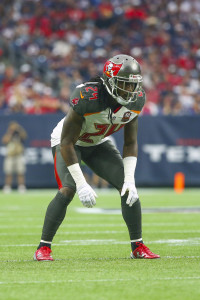 Jenkins, 31, has been sitting on the open market since his contract with the Buccaneers expired in March. He spent the past two seasons in Tampa, although he appeared in only 15 totals games, as his 2014 campaign was wiped out by a pectoral injury. Save for one year with the Raiders, the rest of Jenkins’ action came with the Cowboys, the club that made him a first-round pick back in 2008. All told, Jenkins has 101 games (68 starts) under his belt, and has posted 10 interceptions during his career.

Arizona isn’t a bad landing spot for Jenkins, given that the club hasn’t truly replaced 2015 starting corner Jerraud Powers. The Cardinals appear to be counting on special teamer Justin Bethel to start opposite Patrick Peterson, and given that slot corner extraordinaire Tyrann Mathieu is still on the mend, it makes sense that Arizona is adding more secondary depth. It’s fair to wonder how much Jenkins can help, however, given that he graded as a bottom-20 corner last season, according to Pro Football Focus.

At the very least, Jenkins should be able to help on the Cardinals’ special teams unit, as he played on roughly a quarter of Tampa Bay’s ST snaps last season. Arizona needs all the help it can get on special teams, as the club ranked 29th in special teams DVOA in 2015.

Here are Wednesday’s practice squad signings and cuts from across the league:

Here are the practice squad signings and cuts from around the NFL for the first day of October: