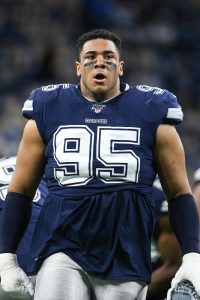 Christian Covington is heading to Denver. The defensive lineman is signing with the Broncos, reports SiriusXM’s Adam Caplan (via Twitter).

Following a four-year stint with the Texans, the former sixth-rounder signed with the Cowboys last offseason. He ended up having one of the most productive seasons of his career, compiling a career-high 28 tackles to go with one sack and one pass defended in 16 games (six starts).

In total, Covington has made 66 regular season appearances (15 starts) during his career, collecting 8.5 sacks.

Covington will be competing with rookie third-rounder McTelvin Agim for snaps behind starter Mike Purcell.

Christian Covington is staying in the state of Texas. The former Texans defensive lineman is signing with the Cowboys, a source told Adam Caplan of Sirius XM Radio (Twitter link).

Per Caplan, it’s a one-year deal. No word on the terms yet, but it’s a significant signing for Dallas. A sixth round pick of Houston back in 2015, Covington had a career year last season. In a rotational role, Covington racked up 3.5 sacks in just 12 games last season. He earned above average marks from Pro Football Focus during his time on the field.

He played just under 25% of the defensive snaps in Houston last season, so his production is notable. Covington has struggled a bit with injuries the past couple of seasons, as he played in only seven games in 2017. He’ll be joining a talented Dallas defensive front that took a big step forward last season.

With Randy Gregory suspended again and David Irving appearing to walk away from the game, there should be some playing time open on Dallas’ defensive line next year. Covington played his college ball at Rice, so he’s been in the Texas area for a long time now.

Nick Foles is going to be a Jaguar. The Super Bowl MVP agreed to terms on a four-year deal with the Jaguars, with a base value of $88MM. While Foles cashed in, he didn’t have much of a choice on where to go. There were “no significant other suitors” for Foles’ services on the open market, according to Mike Garafolo of NFL Network (Twitter link). In the video posted to his account. Garafolo explains that Jacksonville was essentially bidding against themselves, but didn’t mind overpaying.

Garafolo reports the Jaguars wanted to pay Foles more than they had to, so that he would have the immediate credibility in the locker room of being the unquestioned starter. The Jags thought it would’ve sent the wrong message if they had lowballed Foles and tried to pay him something in the $15MM range, and that it would’ve diminished Foles’ standing. Having Foles being able to step in and manage all the large personalities in their locker room is very important to the team, Garafolo notes.

Here’s more from around the league on a very busy first day of free agency:

Despite tearing an ACL in November, Deshaun Watson looks like he’ll have some involvement in the Texans‘ offseason program. The one-time offensive rookie of the year favorite is ahead of schedule in his recovery process, just as Bill O’Brien anticipated he would be coming into the offseason program, James Palmer of NFL.com reports (video link). Watson will be throwing some during the offseason. Although Watson is currently working out in a brace on the injured knee, Palmer notes the second-year quarterback may not have to wear a brace once he returns to game action. The former national championship-winning passer will not participate in the team portions of the Texans’ OTAs but will throw during the seven-on-seven and passing portions of the workouts, per Palmer.

Here’s the latest out of Houston.

The Texans have lost yet another member of the front seven. This time, it’s defensive end Christian Covington. His season is over thanks to a torn bicep, coach Bill O’Brien told reporters on Monday morning (Twitter link).

Covington, originally slated to be a backup, was thrust into the starting lineup when the Texans lost multiple starters to injury. Houston will now have to dig even deeper after losing defensive end J.J. Watt and outside linebacker Whitney Mercilus to long-term injuries. Defensive ends Kendall Langford (knee) and Joel Heath (knee), meanwhile, are still on the mend.

Covington appeared in seven games for the Texans this year, including two starts. He finishes out with 16 tackles and one sack. In his small sample of play (166 snaps), Pro Football Focus gave him an 82.2 overall score, putting him the top 30 for interior defenders.

The Texans have locked up their entire 2015 draft class in one fell swoop, according to John McClain of the Houston Chronicle, who reports (via Twitter) that the club has signed all seven of its draftees. That includes first-round cornerback Kevin Johnson and second-round linebacker Benardrick McKinney.

According to Over The Cap’s draft pool figures, Johnson will be in line for a four-year contract worth more than $10MM, including a signing bonus of about $5.569MM. His deal will include a fifth-year option for 2019 as well. As for McKinney, he’ll earn $5.345MM over his four-year rookie deal, including a $2.147MM signing bonus.

As our draft pick signings tracker shows, Houston is the third team to finish signing its 2015 draft class. The Dolphins and Vikings have also reached agreements with all their draftees.

As one of the top offensive lineman available, Stanford tackle Andrus Peat is a projected first-round pick in the 2015 draft, but there’s one catch — he hasn’t officially declared yet. However, multiple sources tell Rand Getlin of Yahoo! Sports (Twitter link) that the junior is expected to enter the draft, so we’ll probably hear an announcement before the January 15 deadline. Here’s more updates on NCAA underclassmen…